I do cry for you, Argentina - Charlie Methven 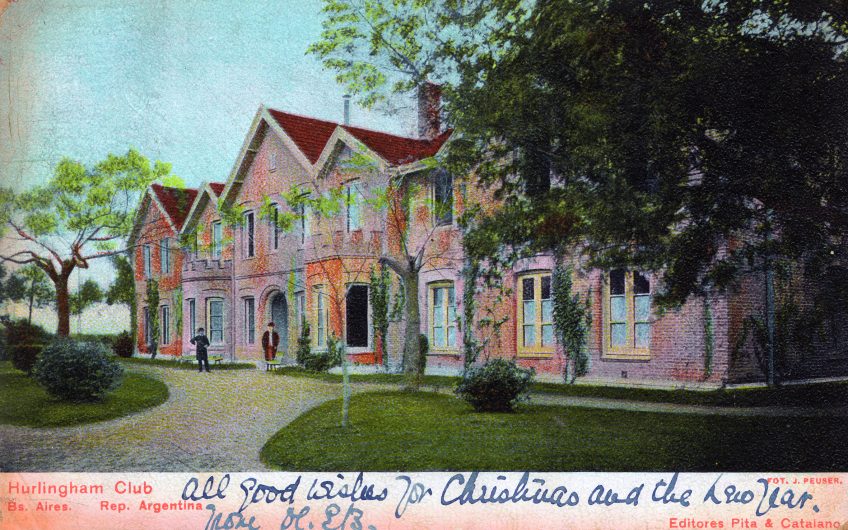 Sepia-tinged melancholy lingers over many parts of Britain’s former empire. From Happy Valley in Kenya to Harare in Zimbabwe, once-grand clubhouses, haciendas and cricket grounds gently subside, as the memories of grandeur dissipate through the generations.

Forty years on from the Falklands War, though, nowhere beats Argentina for a still-tangible sense of lost opportunity, luxurious times past and poignant reminders of the way things were when Britannia ruled the waves.

My ancestors didn’t fight in India, discover mountains in Africa or commit reckless acts of derring-do for the Raj. But my great-great-grandfather, an engineer at Harland & Wolff shipyard in Belfast, sailed to Buenos Aires in the 1870s to build railways. Billy Taylor was one of thousands of buccaneering middle- and upper-class Brits who emigrated in the mid-19th century to make their fortune in the Argentine, a vast and largely unexplored country which had attained independence from Spain in 1812.

Today, Kenyans of British descent number 40,000 or so, and white Zimbabweans around 60,000, but – almost unrecognised – there are over 100,000 Anglo-Argentines still at large. It’s why the seminal work on Anglo-Argentina, by legendary Telegraph correspondent Andrew Graham-Yooll, is called The Forgotten Colony, an intentionally ironic title given that Argentina was only very briefly, in 1807, an actual British colony.

Back when men were men, and expats trudged wearily to the further reaches of the world to administrate, soldier, farm or idle, the British rush to Argentina had a simpler motive: get rich quick.

And boy, did it work. Billy Taylor and his pals were so successful at making cash that within one generation of their arrival, they had transformed the hitherto hick Argentina into the fifth-richest country in the world. And it was a country in which the Brits owned more than half the economy – and more than 30 per cent of all British overseas investment was in Argentina.

With their newly acquired wealth, the Anglo-Argentines weren’t interested in fitting in with the mainly Spanish and Italian locals. Instead, they set about recreating what the top toffs had back home – only more grandly, where possible. English public schools were quickly erected: to this day, St George’s, St Andrew’s and Northlands educate their descendants (in English) in Victorian-style classrooms, looking out over swathes of emerald-green rugby pitches.

In 1912, Harrods opened its only other store in the world – a near facsimile of the Knightsbridge original. My Great Uncle Ralph, ‘Rodolfo Taylor’, was on its board for a while in the 1960s. Harrods Buenos Aires eventually closed in the late 1980s in the aftermath of the Fayed takeover. The last time I visited, the dusty food hall was an artisans’ market.

For the belle-époque Anglo-Argentines, gents’ clubs were de rigueur. In 1897, G W Taylor was one of the 50 or so founders of the Jockey Club’s palatial first clubhouse. The plaque in the entrance hall today indicates that his co-founders included Andersons, Bells, Bridgers, Browns, Caseys, Garrahans, Lawries, Lowes, Malcolms, Murphys and Shaws.

The club opened its first racecourse in central Buenos Aires in 1907 and its astonishing country club in the suburb of San Isidro in the mid-1920s – replete with polo pitches, an Ascot-style racecourse and two golf courses designed by Alister MacKenzie, the Scot who designed Augusta National.

While the Jockey Club continues to glisten even now, a better sense of how life was back then can be found at the Hurlingham Club, just outside Buenos Aires. Founded in 1890, this club is where polo and proper golf were first played in Argentina. It remains startlingly evocative of many mid-ranking English public schools. The solid, late-Victorian main building has a canteen-style dining room. The cricket pavilion – with its dusty corners and photographs of long-forgotten mustachioed visitors – is a homage to Eton’s Upper Sixpenny. I even found a long-forgotten fives court in one corner of the club’s buildings.

My great-grandfather, who had gone out before the First World War to manage a beef-suet business, was ‘fresh meat’ and much in demand. It was frowned on for >span class="s1"> preservation of British identity was all – even speaking Spanish in the Hurlingham was banned until a few decades ago. Ironed, aged copies of the Times can still be found in the billiards room.

As these extraordinary tableaux of Edwardian nouveau-riche life were taking place in what was still a far-distant land, three weeks’ sailing from Southampton, Argentine wealth was reaching its zenith. In 1913, the country was richer than Germany, France and Japan, and had almost twice the GDP of Spain.

Relatively unscarred by the lacerating Great War expenditure and loss of manpower of the other major world economies, Argentina’s wealth continued to accumulate at an astonishing rate in the roaring twenties. But storm clouds were gathering. Too much had ended up in the hands of too few, and ‘the many’ – almost all of Spanish and Italian origin – were increasingly resentful.

Shortly after an establishment coup led by the Anglo-Argentine General Rawson – whose family had established the Welsh colony in Patagonia in the 1860s – Colonel Juan Perón came to power in 1946, accompanied by his fiery, working-class wife, Eva. Proclaiming themselves the defenders of los descamisados (‘the shirtless ones’), the Peróns set about dismantling British economic power – nationalising the railways, in return for cancellation of war debt, and booting the Brits out of a host of once-profitable industries.

Then things turned really ugly. In 1953, a torch-bearing Peronist mob charged down the street from the Casa Rosada (the Pink Palace, as the presidential residence is known) and burned the Jockey Club to the ground. A few days later, Perón dissolved the club itself, and the state took over horse-racing. My grandmother, who was visiting her relatives, remembers the incident as being ‘like a death in the family’. Even now, Evita is referred to by Anglo-Argentines as ‘the witch’.

After Perón’s subsequent fall (another military coup, naturally), the Jockey Cub was reinstituted and relocated to a splendidly palatial building opposite the French Embassy, just down the road from the Recoleta Cemetery where Evita is buried.

In Great Uncle Ralph’s opinion, Anglo-Argentina never recovered from the post-war Perón years. It inaugurated the dominant political tradition of Peronism, which is – at its heart – anti-English. The Brits were the clearest representation of the oligarchy who had made, and milked, modern Argentina in a period that lasted only about 80 years, but must have seemed to last for ever for those on the other side of the divide.

Now, other than the wonderfully distinctive Anglo-Argentine names – think Santiago Davidson or Alejandro Woodward – the British influence in Buenos Aires is more subtle. It is felt in rugby, which the British brought to the country and where many of Los Pumas’ more prominent players have been Anglo, educated at Anglo schools or from Welsh Patagonia. You can feel it in the Anglican Cathedral of St John the Baptist, the oldest non-Catholic church in Latin America. And it’s there in the oak tree-surrounded schools and the cricket clubs in the Buenos Aires suburbs. And in those gents’ clubs, still frequented by the great – and often not so good.

The decline, though, is continual. The English language newspaper, the Buenos Aires Herald, closed five years ago. Only octogenarians remember the days when Brits ruled the roost in Buenos Aires business. Most Anglo-Argentines now quietly oversee their estancias or have somewhat assimilated. It’s a far cry from the bombastic self-confidence of the 1920s.

And the Falklands? Early 1982 was an uncomfortable time for Anglo-Argentines, who wrote despairing and pitiful letters to Maggie, imploring her not to go to war. Otherwise, the issue lingers in the background like an untreated bunion.

These days, the inexorable disintegration of the economy is more pressing. It wasn’t just Anglo-Argentina that never recovered from Perón’s reign of terror. Even as the Jockey Club burned in ’53, Argentina’s place at the top table of global economies also went up in smoke.

As the Hurlingham’s dusty photographs have faded over the years, so have the lingering memories of the stylish, elegant, fizzy country Billy Taylor and his intrepid mates made great.