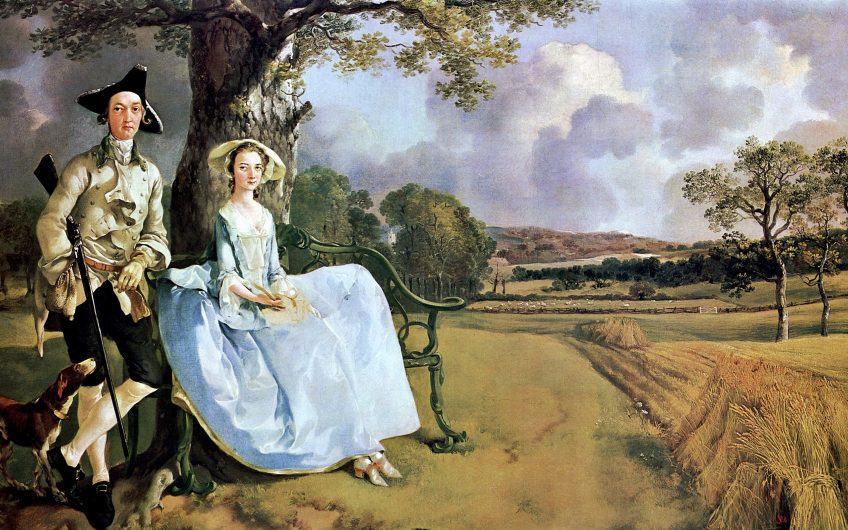 I’d love to say that we first saw the lady in the green dress across a crowded auction room, but paintings are bought from online images as much as everything else these days. Like the rest of the art world, Dad and I click through the daily email updates from the auction houses. If there’s anything exciting, we ring each other at eleven, when he will be at the gym and I will be on my lunchbreak at work. One morning two Septembers ago we both saw this small painting at an auction in the West Country.

It was a three-quarter length portrait of a lady, catalogued as Circle of Arthur Devis (1711 – 1787), and dating by her dress from the 1740s. The estimate was low, but the condition was encouraging. There was fifty years’-worth of grime on the surface, but underneath it looked pretty much intact. The gloved hand was a virtuoso bit of painting. But whose?

While I was pondering, Dad had a synaptic flash. He realised he was looking at an early portrait by Thomas Gainsborough. It was the quality, he said. She couldn’t be by anyone else. She reminded him of Gainsborough’s earliest self-portrait, painted when he was first working in London at the age of 13, and rediscovered in the early 1980s by the actress Adrienne Corri. The lady in green was a maturer work, but the stylistic handwriting was identical.

Even under old varnish, our portrait had the same presence. The lady’s elusive, mobile expression began to work its magic on us. We had to have a go.

You might wonder why we didn’t view her in the flesh. The photo told us everything we needed to know, and viewing a sleeper in public can be a Clouseau-esque nightmare. Zak my husband now knows the drill I was taught twenty years ago: look at random pictures as well as the one we’re there for; don’t say the artist’s name. And on the drive back home he will reassure me that no rivals overheard my whispered phone call to Dad in the car-park, or whatever that viewing’s paranoia happens to be.

The day of the sale I was at work. While Dad was bidding online, I was pushing my barrow, counting magpies and thinking how Gainsborough-like the trees in the churchyard looked. We could only buy the portrait if no one else had clocked it as a Gainsborough. If there was serious interest we’d be blown out of the water. There’s an art world legend about a keen young dealer who spotted a Rembrandt – or a Velazquez, or a Leonardo - at an unheard-of auction on a Scottish island. They took a train, and a taxi, and a rowing boat, and they got to the auction a good hour before the sale. There was hardly a soul there, but when the auctioneer was just in the rostrum the windows shook, there was a tremendous noise outside and a Bond Street dragon landed by helicopter. As God wills it.

There had been another Gainsborough sleeper only a few months before the lady in the green dress. A six-inch high canvas of an officer, head and shoulders. I’d seen a photo of it a few days before the sale, but I couldn’t pin down why it seemed familiar. The way the face was painted so your eye moved around it constantly. I thought he might be by Francis Hayman (1708 – 1776), leader of Georgian modern painting, and Gainsborough’s friend and mentor. But I missed placing a bid. It sold to the one happy bidder who’d known the artist. Sometimes luck is with you. Sometimes it isn’t. When I found out it had been a Gainsborough I nearly drove through a red light, and came close to shooting a second one trying to see if there was a camera on the first. Zak’s nephew heard about this, and mocked up a very plausible DVLA letter, causing a moment of delicious panic when I opened the post.

This time, things went smoothly. Dad bought the painting above estimate, but comfortably. He and Mum collected it. Mum’s judgement was its first test - she once said that a large panel painting would either make a good picture or a good headboard – but the lady in a green dress passed with flying colours, and they and took it to Andrea Porto our restorer. In his studio, Andrea rubbed the surface with white spirit and put it under the bright light. I read about this white spirit trick in Philip Mould’s Sleepers before I’d ever seen it done, and it still amazes me. The surface murk disappeared and just until the white spirit evaporated a jewel-like painting appeared underneath. The condition, thank God, was superb. There was a small loss in the sleeve and through her eyebrow, but otherwise she was near pristine. A lucky survival. Modern restorers spend much of their time repairing their forebears’ work. In the Eighteenth Century, an Oxford restorer cleaned the Christ Church picture collection with dilute nitric acid. At the National Gallery in the 1930s, Kenneth Clark gave some rolled-up Turners a good scrub with a broom and soapy water. You’re impressed when a paint surface survives as well as the lady in green. With the lightest touch, Andrea removed the discoloured varnish, and gave us a ring when she was ready.

It was a transformative clean. The painting vibrated, from the fiery silk to sitter’s face. Gainsborough understood micro-expression, and he creates a speaking likeness, captured in mid-thought. And the light. I remember a corridor at Gainsborough’s House Museum where the portraits seemed to light it on each side in bright colours. That was how I knew our portrait had to look, and I was overjoyed.

It was time to ask expert opinion. Brian Allen, the authority on Francis Hayman, very kindly agreed to have a look at the picture, to see whether it had a chance of being Gainsborough. It’s a tense business, watching an expert scrutinize your picture. Dr Allen looked at it in the light of the window, slowly turning the canvas between his hands, while I tried to breathe naturally. He liked it as a Gainsborough, and said it was worth showing to Hugh Belsey, who is writing the catalogue raisonné of Gainsborough’s portraits. Dr Allen was reminded of the early self-portrait, and he pointed out the dancing line of the cuffs, typical of Gainsborough. It was a wonderful moment.

A month later Dad and I met Dr Belsey in a hotel lobby on Piccadilly. I unwrapped the painting, and something remarkable happened. The lady came to life. The raking light from the street caught the surface, and her face flickered with light featherpoint strokes. Just like the ‘odd scratches and marks’ that Sir Joshua Reynolds commented on in Gainsborough’s painting, ‘that by a kind of magic at a certain distance… seem to drop into their proper places.’ They’re characteristic of Gainsborough’s mature style, but they haven’t previously been seen in his work before he went to Ipswich in the early 1750s. This portrait, discovered by Philip Mould, was painted at around that date and uses these feathery strokes to give a fleeting expression.

Dr Belsey took the lady in green out into Piccadilly and looked at her in the sun. He compared her with the self-portrait, and said she had the same soft ‘mink’ background, and a similar handling of the features. In the light he noticed something that we had missed. There’s a pentiment around her neck, a visible mark where the artist has changed their mind about something in the picture and repainted it. The lady was originally wearing a pearl necklace. A pentiment is like an audio record of the sitting. You know that there was a conversation there. The artist painted out the pearl necklace, and the lady’s neck is more beautiful without it.

Dr Belsey gave us his wonderful judgment. It was a humbling moment. The lady in the green dress was by Gainsborough. He would be glad to include it in his catalogue. And it was early, painted c.1742 when the artist was fifteen. Gainsborough is the Mozart of British painting. His talent was born fully formed, and the early paintings are among his most beautiful work. Our painting is an exquisite thing, but it casts a crucial light on Gainsborough’s earliest career. Like the 1740 version of Cornard’s Wood discovered by Philip Mould and Bendor Grosvenor ten years ago, it shows that Gainsborough’s mature powers are rooted in his first paintings. He knew how to paint what he sees not what he knows to be there. The flash of light above silk, not the stuff itself. Gainsborough instinctively saw form as nature. The cart-ruts in Cornard’s Wood are like the folds in the lady’s dress; the feathery shadows of her bodice like the leaves on the trees. Visual music.

What a genius Gainsborough was. As his father predicted he would be, of course.