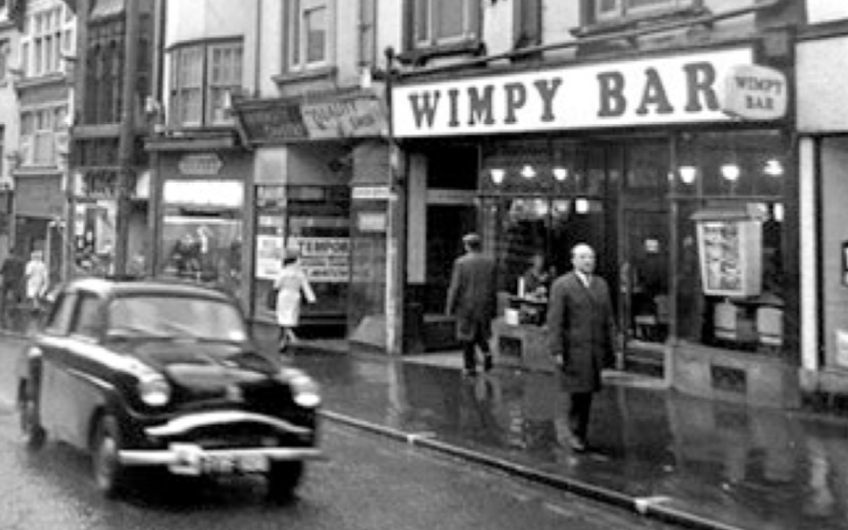 Wendy’s is to reopen in the UK. The first Wimpy opened in 1955. In 1957, the late Felicity Owen introduced the hamburger to Reading, one of the first in Britain. At the time, they were the height of glamour

Wimpy is back! After decades of decline, the hamburger chain announced bold expansion plans in 2018.

The news took me back 60 years to 1957, when my husband and I opened one of the first British Wimpy Bars.

We were not alone then in wanting to break new ground in this country. Britain was far from offering the brave new world for which so many had endured six years of war.

The longing for a challenge led to many of our ex-service friends buying into an occupation – be it a village shop, property conversion or smallholding – for the excitement of taking the initiative.

At home, Nanny looked after our children far better than I ever could. So, when our neighbour in Pangbourne, the catering manager at Debenhams, told us about the revolutionary Wimpy brand, we approached Pleasure Foods Ltd about taking a franchise.

Pleasure Foods (PF) handled the franchise operations of the Wimpy Bars. Wimpy was an American import – the brainchild of a German immigrant to the States, Ed Gold, who, in 1934, set up a small hamburger chain. The inspiration for the name was J Wellington Wimpy, the hamburger-scoffing friend of Popeye, in the comic strip. After the war, Gold approached J Lyons, of Corner House fame, to launch the brand in the UK.

At the company’s peak, in 1970, there were a thousand Wimpy restaurants across twenty-three countries. Wimpy currently has seventy-nine fast food restaurants in the UK. Now owned by the Famous Brands group, the restaurants still offer the original Wimpy, pure beef hamburger, which in 1957 cost 1/3d and today costs £2.85.

My husband and I were among the pioneer franchise-holders, opening our branch in 1957 in West Street, Reading.

To qualify for a franchise, we needed to provide the premises and finance for an American-style makeover to a PF design. Within a month, I had found an ideal site in Reading and we bought the lease for about £2,600. My mother lent us a similar sum for the cost of conversion, equipment and working capital.

Once the shop was ours, the Wimpy fitters took over. Following the standard layout, the griddle, with the toasters alongside, was placed in the window of the fourteen-feet-wide frontage; sizzling hamburgers were an attraction to passers-by. The entrance opened on to imitation wood Formica tables and bentwood chairs, leaving space near the grill for takeaway customers to queue.

Ahead, the jazzy, red and yellow, Formica-topped bar, with upholstered stools, brought a touch of colour, leading to more tables squeezed in, seating thirty.

Beyond lay the kitchen, where the basic food – including hamburgers in packets of twelve – was defrosted (later, we would add chips).

The hamburgers, served in a sweet bun, were supplied from PF, whose profits came from these sales. Wimpy also supplied the dried onions, sliced Kraft cheese and tomato ketchup.

Other items on the menu were Coca-Cola and Fanta (9d) and Felicitous Whip – an ice milkshake named after me (1/6). The bestseller was the Lyons square blackcurrant or apple fruit pie (1/-).

Our first manager, Mr Treiling, had had pre-war experience in ‘silver service’. The other staff were six part-time waitresses and a male kitchen assistant at the griddle. Mr T treated me with great courtesy and I enjoyed rides in his 1930 Lagonda to suppliers of crockery, condiments and overalls, all in a tasteful blue, and about the only items where the choice lay in our hands. The serviettes and takeaway bags for the hamburgers were all issued with a Wimpy stamp.

We commissioned a mural of a Mediterranean scene by an artist who had been a camouflage expert. The sand was khaki and the beach-lovers, fully clothed in khaki, too, were almost invisible. Blue skies and sea saved all!

Our opening party, on 29th October 1957, offered free hamburgers and drinks, overseen by Mr T in his striped trousers and black coat.

One Sunday, my ex-naval husband, Charles, at six foot four, towering above the griddle, faced an order for 24 takeaways from a United States Air Force sergeant. Each burger had to be named ‘Hank’ – or whatever they were called – and annotated ‘with’ or ‘without’ onions and/or cheese (6d extra).

One evening, I found myself serving a party from the races, in their Ascot gear. The man who paid must have backed a winner, as he tipped me half a crown – unheard of at Wimpy, but a sign of approval by all classes.

Profits climbed and led us to open a second Wimpy, in Ipswich. But the strain of managing two Wimpys, with the attendant staff-related crises, led me to decline further franchises.

I began a new career, writing a biography of my ancestor, Sir George Beaumont, a key figure in founding the National Gallery. First step was collecting folios of Beaumont’s drawings from my cousin Frances – in the Wimpy van.