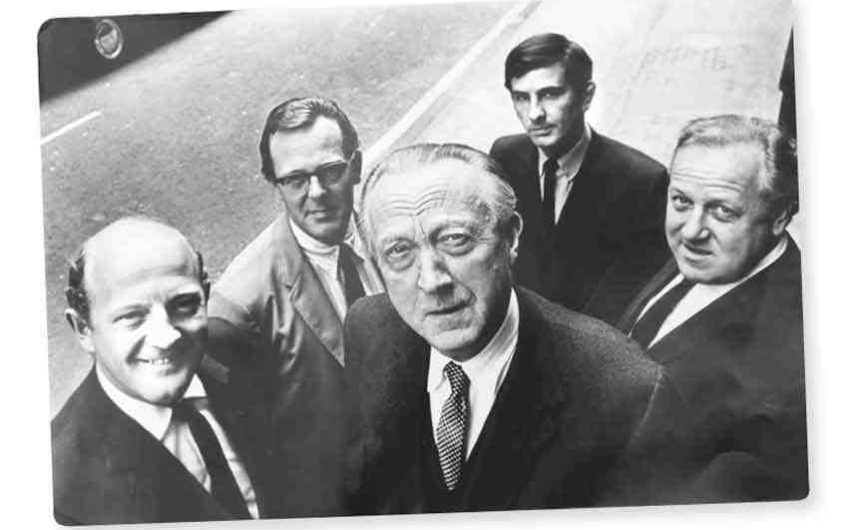 Bob Robinson always seemed too literary, intellectual, upmarket and refined to be a mere Sunday-tabloid hack, says Hunter Davies, and yet that was where he first met him when, in 1959, he joined the staff of the Sunday Graphic

Bob was ten years older than I was and a superior, cynical figure. He was the paper’s film critic, a job I thought must be wonderful – yet he was ashamed. ‘I dread when my children get older and ask me what I do – and I will have to admit I interview appalling Hollywood film actors for the appalling Sunday Graphic.’

Bob was born in Liverpool in 1927, where his father was an accountant. They soon moved to London and Bob went to Raynes Park Grammar School, of which he was inordinately proud. While at Exeter College, Oxford, he edited Isis and later became a journalist.

In 1960, the Graphic closed. We were all dreading what would happen: would I be out of work or have to go back to Manchester? But then Bob and I got moved down the corridor to the Sunday Times. Bob was in charge of the Atticus column – with me as his assistant. Pictured, right, are all the living Atticus editors in 1967.

The column had previously been edited by John Buchan, Ian Fleming and Sacheverell Sitwell – but was anonymous. Bob preferred to stay in the office while I went out. At a London art gallery, I talked to L S Lowry and we got on so well that he agreed I could visit him at his home in Lancashire. When I told Bob, he said he was the boss; he would do it. I was furious. But he did a good interview – and bought direct from Lowry one of his paintings, later worth a great deal.

Bob had a passion for Dr Johnson – and for 18th-century manners. When he went to the pub for lunch, the barman would say, ‘Nice day.’ ‘Would that it were, Mr Smith,’ replied Bob. On leaving, Bob would say, ‘I bid you goodbye.’ I thought it was weird but charming.

When he became well known on radio and TV, presenting programmes such as Ask the Family and Brain of Britain, he still retained touches of his flowery, 18th-century persona. I think he felt embarrassed by the quiz programmes, longing to be a literary novelist.

When I first met him, he lived in Cheyne Row, Chelsea, a grand address for a mere hack. How could he afford that? It was in fact rented, but eventually he and his wife Josee managed to buy it – from the mother of Richard Ingrams.

My wife and I were invited for dinner once. They had a butler and some very distinguished guests, such as Robin Day. He decided to pick on me, asking if I was Bob’s boy – did I make his tea and wipe his bottom? My wife was more than a match for any such Oxford Union smartypants and laid into him.

She wrote our thank-you afterwards, laying into Robin Day. I still have Josee’s reply: ‘I expect my dinner guests to reply nicely and if they did not like the evening, not to come again.’

Marg of Arg was a real star - Lady Colin Campbell