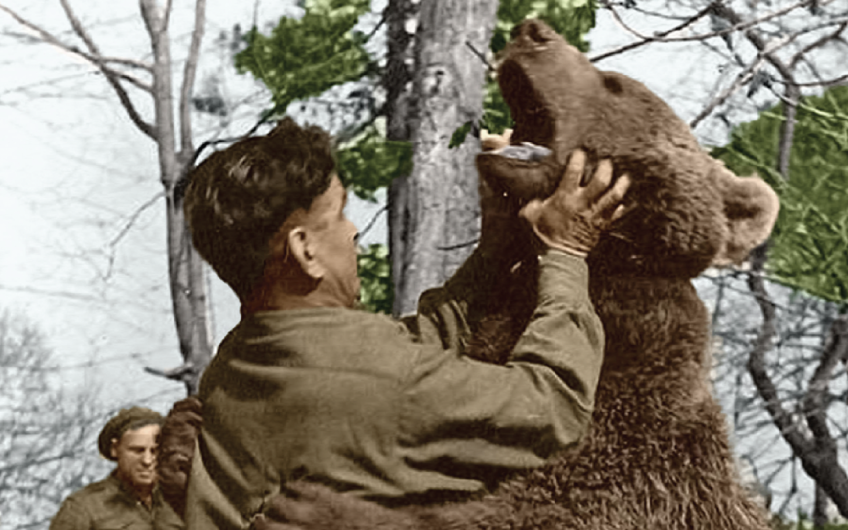 Researchers at Hull University have discovered that a fifth of us make up our earliest memories. One volunteer even claimed to have seen a living dinosaur. But at the age of four in Berwickshire I really did meet Voytek (Wojtek) the bear. I know because I checked. ‘Am I dreaming or did you take me to meet a bear just after the war?’ I asked the bear like Auberon Herbert, himself worthy of an I Once Met, at a party in the 1960s. ‘I certainly did and that’s exactly why, because I knew you’d always remember it,’ he replied.

Voytek was loosely chained to a tree. He stood upright while jolly Polish soldiers put him through his party routine. What sticks in the memory was his relish for swallowing lit cigarettes. He no doubt also quaffed a bottle or two of his favourite beer, opened his mouth to inhale exhaled smoke and indulged in a bit of bear play. My recollection is of a fierce, dark, presence whereas he was brown and renowned for gentleness. It grieves me in old age that no one thought to bring a camera.

Voytek was unique, as witness the the new cartoon about Wojtek that is currently in production. In 2010, the Polish Institute in London held an exhibition, telling Voytek’s story in film, photographs, cuttings and books, including two biographies.

Voytek, bought as a starving cub in Persia, became the mascot of the 22nd Company of the Artillery Supply Command, 2nd Polish Corps, and served with them from 1942 until 1947, by which time he weighed 250 lbs and stood over 6 ft tall. When the Company travelled, Voytek sat in the cab between Peter, his guardian, and Stanislav the driver. In Palestine he almost died from a scorpion sting. In Iraq he caused mayhem by making off with the precious, non-Army issue, smalls of the Women’s Signals Company, which he had discovered on a washing line. But his antics could also be militarily productive. In Egypt he sneaked into his favourite hang out, the washhouse, and flushed an Arab hiding there with some stolen rifles. The terrified man was captured. Voytek earned himself a legitimate shower.

By the time he reached Italy in 1944, Voytek had a name, rank and number. In the battle for Monte Cassino, won by the Poles on 18 May, he helped carry ammunition boxes and 25 lb shells from truck to battery. His action inspired the Company insignia: a bear carrying a shell against the background of a steering wheel.

In Glasgow, at the war’s end, he marched at the head of the victory parade and was then posted to Berwickshire, where he took swims in the River Tweed and was elected an honorary member of the Scottish-Polish Society. He continued to make himself useful carrying logs, crates and rolling barrels. When the Polish army was ‘demobbed’ in 1947 he was sent to Edinburgh Zoo. His old comrades often visited him, horrifying visitors and bringing the keepers running by climbing into his cage. Voytek died in 1963.

Krystyna Ivell who, as an exiled child, followed in Voytek’s footsteps and even made use of the same desert washhouse, has gathered a remarkable amount of documentation but laments the apparent loss of Pathe News footage and a Blue Peter item. She would also like to hear from anyone on the Canadian troop ship that brought Voytek from Naples. The captain pleaded to buy him.