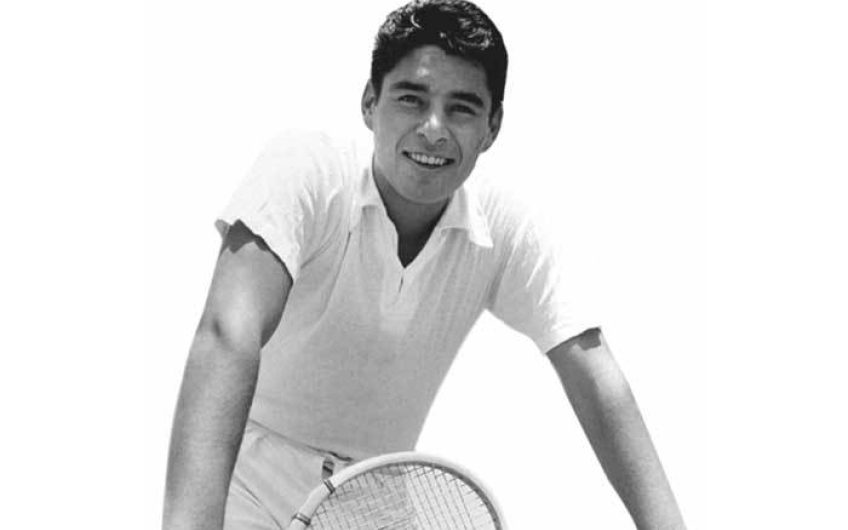 Fifty-one years ago, there was a milestone in the history of lawn tennis. On 22nd April 1968, the opening of the British Hard Court Championships at the West Hants Club, Bournemouth, was the day the game went ‘open’, abolishing the distinction between amateurs and professionals. And that was when I played Pancho Gonzales.

Although Gonzales (1928-95) never won Wimbledon – as a professional, he wasn’t allowed to enter – he was regarded as the finest player of his era.

There were only a handful of professionals then. Often, the winner of Wimbledon would turn professional and take on Gonzales, the leading pro. Lew Hoad, Tony Trabert, Frank Sedgman and Rod Laver – all Wimbledon winners – competed against Gonzales. From 1954 till 1962, he beat them all.

Gonzales was the McEnroe of his time. Charismatic, brooding, contentious and solitary, a 6ft 3in, well-built, athletic American, he cast fear into opponents. He regularly snarled at them and took on umpires, linesmen and promoters.

I, on the other hand, was a journeyman amateur. I’d competed five times at Wimbledon and was giving up competition through lack of funds. But it was the world’s first ‘open’ tournament. I had to enter. To my horror, in the first round I was drawn against Gonzales.

I thought the locker room was empty, apart from a few mates, as I bared my slim ten stone. ‘He won’t see you down the other end,’ one friend teased. ‘Don’t hit winners. You know his temper.’

From behind a row of lockers, came this slow American drawl: ‘Kid, when that ball comes over the net, remember there’s no one’s name on it.’ Stunned by Gonzales, my tormentors slid out of the room.

In those wooden-racket days, Gonzales was the ultimate serve-and-volleyer. His beautiful, flowing service action bore immense power, speeding him to the net, where his catlike movement and reflexes cut off everything. Unlike the larger swings of today’s players, his strokes were briefer and flatter, and he could place the ball on a sixpence.

He seemed to know where I was going to hit the ball even before I did, and move to it with loping ease. He toyed with me, almost entirely from the baseline.

Occasionally I tried a drop shot. Fool. He would move to it before I’d even completed the stroke. And touch one perfectly back. After the 6-2, 6-1, 6-1 drubbing, there was magnanimity as his hand gripped mine. He smiled and said, ‘You didn’t listen.’

The next day, I went by train to St Bede’s Prep School, Eastbourne, and gave my first tennis lesson (I went on to become a tennis coach).

‘Watch the ball,’ I told my ten- year-old pupils. ‘Don’t worry about your opponent.’

The Hell of being put on hold – Sam Llewellyn