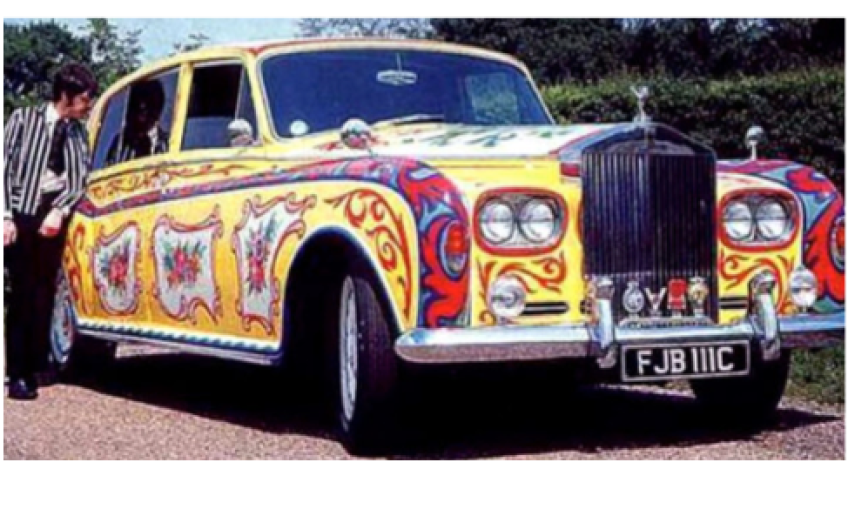 'Imagine no possessions...' or maybe John Lennon should have written, 'If you really do have to have possessions, you might as well have a bit of fun with them...'

That way, he couldn't have been accused of not walking his talk.

He outdid the rest of the Beatles at all manner of things – but especially when it came to cars. Although he took his yellow psychedelic Rolls-Royce to the States in 1970, and ended up donating it to a New York museum to ease a tricky tax situation, it was back in once-swinging London this week – and on show at Bonhams, just down the road from Oldie Towers.

As a spectacular plug for the arrival of R-R's new Phantom, famous Rollers from around the world were assembled for a five-day exhibition at Bonhams. There were Rolls-Royces that belonged to luminaries including Fred Astaire, Sir Malcolm Campbell and the Queen. But Lennon's car stole the show, not because it is now reckoned to be the most valuable automobile in the world, but because, even today, it is still a work of outrageous art.

Apparently, it caused protests from the non-swinging brigade when Lennon first took it for a spin down Piccadilly. But he soon found a way to deal with them, by installing a sound system that enabled him to speak to pedestrians while he was in transit – usually telling them to get out of the way.

Chums such as Paul, George and Ringo, not to mention Brian Epstein, Bob Dylan and Keith Moon, all seemed to have had a jolly time in the back of the car – which was said to have an extensive supply of drugs and alcohol.

But the exterior was perhaps the trippiest thing of all – a collision of psychedelia with gypsy caravan-style art that defies you not to smile at the irreverence of it.

Lennon's automotive masterpiece is now bound back to the Royal British Columbia Museum in Canada. For me, it was the brilliant highlight of a grey week...