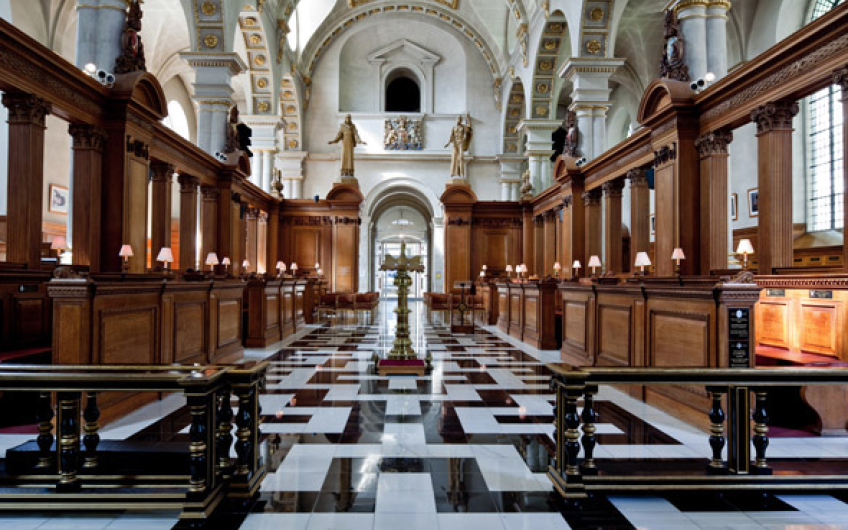 Churches are crammed with carol services at this time of the year. It’s the show-stopping period when congregation numbers swell, seduced by the promise of ‘candlelit carols’ and post-service mince pies and mulled wine. Turnout is cheering compared with the shrunken congregations that British rectors preach to on Sundays throughout the year. It’s no wonder our churches pull out all the stops. Yuletide is their best chance to harness, convince and convert the faithless caroller – who finds that Jingle Bells resonates as strongly as Away in a Manger.

Not including weddings and funerals, I haven’t been to church since – gulp – Easter this year. To remedy this, and because it’s Christmas, I’ve attended services on back-to-back evenings this week. This places me well within the portion of the British population that helps to drastically up church participation figures at this time of year. According to the Church of England, it’s by nearly three times, to 2.5 million; rather than the average Sunday congregation – that’s just 750,000.

Each year, I go to the service of Nine Lessons and Carols on Christmas Eve at Ripon Cathedral. I’ve even started my own ‘London’ ritual of attending the Journalists’ Carol Service at St Bride’s, on Fleet Street – this year was my fourth. Ordinarily, I wouldn’t shoehorn in another, but a fellow regular caroller’s office Christmas soirée landed on that fateful Monday eve. So we sought a Sunday alternative.

Candlelit Carols at All Saints Church in Peckham sounded like a promising substitute. I’d admired the church in passing. On entry, a friend commented that she felt ‘nervous’. There were a few reasons I could guess at: it might be that the inside of the beautiful 19th-century church was cast in red and blue light beamed across the altar – more Jesus Christ Superstar than O Come all Ye Faithful. Or, it could be the electric guitar held by a man – who was almost certainly the vicar.

She had good reason to be apprehensive. In no particular order we experienced: rock’n’roll carols; song lyrics and readings projected on to a white screen dangling from on high (the service sheet we were handed earlier was no such thing – it was a flier plugging the Alpha course); a Stormzy (popular grime and hiphop artist) tune with the lyrics replaced with prayers and strengthened with dance moves (the chorus became ‘Blinded by your grace’ when the children held up their arms to the sky, sheltering their eyes from the light); and a video playing in the background showing the kids writing notes to God in their school exercise books.

The priest then did his best at making evangelical Christians of us all. Former Alpha course-goers (the introductory course that has proved a hit with newcomers to the church and has now been attended by more than two-and-a-half million people in Britain) sprung up from amid the congregation, strategically placed all around; they smiled, waved and rotated 360 degrees (so we’d know where to find them later). Next, a three-minute interview with a few of the last Alpha intake was screened.

Just when the service couldn’t get any weirder – a girl’s Afro hair was set alight, caught in the flame of a candle that was handed round at the start of the service. It was frightening and bizarre; luckily, she was fine. While all this was going on, three of the group we’d come with left – two atheists among them.

In stark contrast, the next evening at St Bride’s, on Fleet Street, designed by Sir Christopher Wren in 1672, was a breath of fresh air – never have traditional carols been more welcome: choristers in conventional church regalia set against the golden glow of candles singing Hark the Herald Angels Sing (against the familiar echo of the great organ).

Yesterday a BBC report, the Religion and Ethics Review (a year in the making), was published, and that has spurred the decision that the BBC will give all religions a prime-time TV boost. This is despite a record 53 per cent of Britons saying they have no religion. Radio 4 will be keeping its Thought for the Day slot (despite John Humphrys’s criticism earlier this year) and inviting figures from a wider range of religions to contribute.

My feeling is that the Alpha course – and the Alpha carol service – has strong comic potential. It can’t be long before the likes of Robert Webb and Jesse Armstrong set their agile comic minds to the subject. Of course, we’ve already got Father Ted (1995-1998) and The Vicar of Dibley (1994-2007) in our bank of religious comedy; and this does go against the freshly voiced feeling in the report that ‘people of all faiths were 'often absent, poorly presented or satirised'. But the Alpha carol service? Surely it was made for the telly? Plus it will contribute a juicy bit of religious material to the fresh BBC airtime the subject has secured.