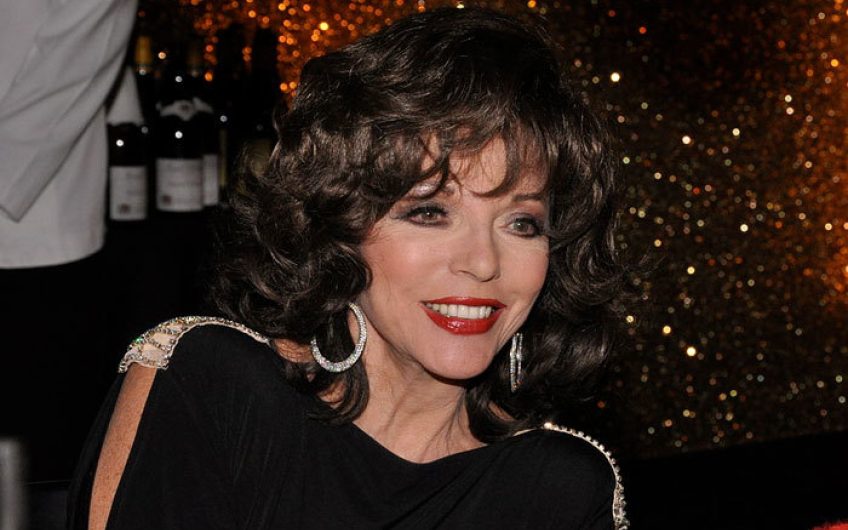 Deep in the absurd machinations of the Awards Ceremony there’s a strange but enjoyable role, that of the ‘celebrity walker’.

It’s the walker’s lot to pace anxiously in the forecourt of plush hotels until a particular limousine arrives, at which point you leap to the curb, tear open the rear door and reveal your day’s glittering charge. You then point them up the red carpet, check their coat, steer them towards people they might want to meet, prod a warm goat’s cheese salad beside them at the banquet, and make sure they’re on stage on cue, delivering their hopefully headline-grabbing speech. Apart from pouring them into a cab at chucking-out time, your work is pretty much done.

On February 26th 1999, I was the celebrity walker for Joan Collins in the ballroom of the Park Lane Hotel. She’d made her first screen appearance, aged 17, as a beauty contest entrant in the 1951 Diana Dors picture Lady Godiva Rides Again and shown the same sort of pluck ever since, though it was her tenure as a vengeful tycoon-wife in Dynasty that promoted her to that plateau patrolled by the sort of card-carrying legends who get asked to make speeches about the rebirth of the British movie industry. As she was doing at the Empire Film Awards that day.

She floated along in her silver-grey suit and white leather gloves, still painfully pretty and perfectly charming to everyone, but reserving a clipped and impatient tone for her thankless walker. A wave at Guy Ritchie, a quick hello to Spike Lee, a hissing aside to me: ‘Where’s the table? I need to sit down.’ A sisterly hug for Kate Winslet, a cheery pose with Bob Hoskins, another chilly riposte for old muggins here: ‘I said still water, not sparkling!’

Speech time came closer and I told her she was on in ten minutes. ‘What should I say?’ she asked, anxiously. Say whatever you want, I shrugged. Just get up there and, you know, be you! She turned the menu over, took out a pen, held it poised above the blank back page, and nailed me in the steely glare of her headlights. ‘I said, what should I say?’

Why don’t you say, I don’t know, that it’s great to be here, thanks for asking me and…

‘It’s great to be here, thanks for asking me…’ she was writing down every word. She clearly expected the role of walker to include all aspects of public address. ‘It’s been an extraordinary year for the British movie business,’ down it all went. ‘The success of Harry Potter and Lock, Stock And Two Smoking Barrels, that well-deserved award earlier for the great Bob Hoskins, all these have helped put this sceptr’d isle, not just back on the cinematic highway but in the driving-seat with the pedal down…’

I was on a roll. I took another gulp of the head-splitting, bright-yellow chardonnay. I could get away with anything!

‘And for its invaluable part in this historic renaissance,’ scribble scribble, ‘I’d also like to thank EMPIRE magazine for…’

But up she went and she was terrific. It was a little bit thrilling to hear my words performed, and with so much theatrical flair. She stayed to the bitter end, nice as pie, and then suddenly I was getting the gimlet eye again. ‘Where’s my goodie bag?’ she frowned.

Several hundred carrier bags had been stacked by the exit, bulging with gifts to cheer the reveller’s tired and emotional onward journey. But surely they couldn’t contain anything that Joan Collins was going to want. Especially now, when only one thin and tattered bag remained, whose contents had obviously been looted.

I peered inside and winced. A Titanic original soundtrack CD, a miniature of vodka, ten menthol ciggies and a baseball cap bearing the legend ‘stevenspielberg.co.uk’.

She took it briskly, gave a brave but watery smile, swept into the night and was gone.