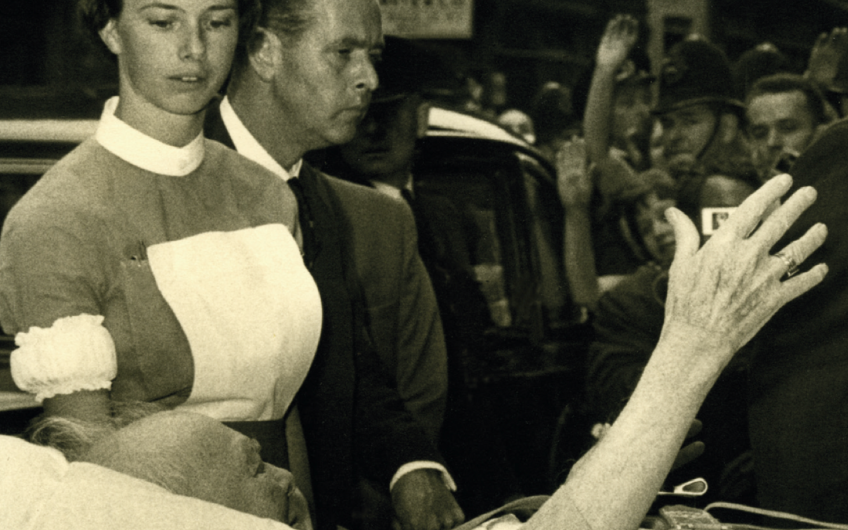 I was working hard on a cancer ward at the Middlesex Hospital in London, on 28th June 1962, when I was summoned by Matron, Miss Marjorie Marriott. I had to be ready next day to ‘special’ Sir Winston Churchill, admitted to the Woolavington Private Wing with a fractured left hip at the age of 87. The term ‘special’ was when you gave a patient one-to-one and were exempt from other ward duties.

Churchill had had a fall in France and the RAF was flying him in to arrive during the early afternoon. Matron told me I was not to mention it to anyone; and that I was never to leave Churchill’s room when on duty and, if I needed anything, I must ring the bell.

An enormous crowd had gathered outside in Riding House Street to wait for the arrival of Sir Winston. I remember Miss Marriott looking at me, with those piercing eyes, and saying, ‘When the ambulance arrives, you must go out and greet him and I will take care of Lady Churchill.’

I found myself trapped in a noisy, jostling crowd and, with difficulty, I pushed my way through to the stretcher coming out of the ambulance. As soon as Sir Winston heard the cheering crowd, he waved and used his V-sign, which caused more cheering.

His small room on B floor had big windows overlooking a lovely garden. There were no en suite facilities then. The afternoon was taken up with orthopaedic consultants and anaesthetists examining Sir Winston. I knew the two Middlesex men, Mr Philip (Pip) Newman, orthopaedic surgeon, and Mr Peter Cope, anaesthetist.

After X-rays were taken, Churchill was operated on that evening. I went on duty the next morning. With Sir Winston’s transfer from France, immobilisation in a heavy plaster, and then an operation, followed by a night’s sleep, I had a very dozy and reluctant patient on my hands. It wasn’t going to be easy.

As I stood by the bed, he became very restless and I surmised that he wanted to pass urine. As I turned to reach for a urine bottle, he shouted, ‘God damn it, woman, I want to pump ship.’ I gather this is a well-known naval term.

The press were an absolute nuisance, hanging around the hospital entrances every day. In their piece about me, the Daily Express wrote, ‘Sunny Gill nursing Winston… Father says she has a sunny nature.’ Sunny Gill became my nickname and people always said it with a cheeky grin.

Newspapers came each day, delivered by Anthony Montague Browne, Churchill’s private secretary. Winston only wanted to read about himself and to peruse at least five ‘top’ papers, already pared down by Montague Browne.

I pulled up a high stool to help him turn the pages. He started with the Daily Express article, with the caption ‘He comes under watchful eye of nurse Gillian “Sunny” Keefe, born 1939.’ He stabbed the paper with his index finger and said, ‘Is that you? Huh – mere baby!’

‘Maybe – but I know how to look after you.’ That produced a chuckle and a twinkle. He did have the sweetest smile – so good to see after the miserable first two days of post-operation depression when, with bottom lip pursed, he had complained, ‘I want to go home.’

He looked so sad and vulnerable; who wouldn’t, in their late eighties, with a leg in plaster, flown from France, now in discomfort and in hospital? Here, I have to admit, I gave him a hug.

The day after the op, Lady Churchill arrived. Winston was dozing and, when he heard her voice, his face lit up. ‘My darling Clemmie, darling!’ he said.

I was shocked; a few were faded. One gift was a large ‘V’ of red, white and blue flowers, from Field Marshal Montgomery.

Lady Churchill and Montague Browne discussed whether Monty should visit. Evidently, Winston and Monty had heated discussions and these could cause a stroke. It was decided that Monty should not come, nor should Winston’s son, Randolph.

Cigars were the bane of my life. Sir Winston would take two or three puffs, then rest his hand over the ashtray and let the cigar smoulder. The free fingertips would lie in the ash.

Lady Churchill had said that she did not want him to drop ash on his silk vests as it made holes. She also asked me to make sure he did not have ash under his fingernails at visiting time.

In the evenings, he played cards, watched a film and had a drink. First thing in the morning, I would put the waste basket outside the door, and the ‘vultures’ descended for the cigar butts.

I remember Sir Keith Joseph MP turning up fresh from Brussels, after a Common Market meeting. Sir Winston switched on, from a dozing old man in his eighties, to a very attentive figure, able to hold a lucid, highly engaged conversation.

Another time, the hospital carpenter arrived to fix the door window blind. As the carpenter left, Churchill proffered his right hand, saying, ‘Thank you, my man.’

The carpenter shook hands and said, ‘I was at El Alamein with you, sir.’ Sir Winston became enlivened and they had a brief chat. The carpenter’s eyes welled up and he left fumbling for his handkerchief; me too.

Mary Soames visited with her three small children. Sir Winston was sitting in an armchair; they reached to kiss him, calling him ‘Grandpapa’.

Lady Churchill always introduced me to the visitors. Then I would sit outside the room with Sergeant Murray, the very jovial private detective. One day, he showed me a neat little gun in a holster under his left armpit.

I met Anthony Eden – I was surprised at his limp handshake – and Edward Heath. Then came General Eisenhower, the one person I wanted to meet. But it was on a Friday afternoon and I had been given, at last, a weekend off.

Late one afternoon, Violet Bonham Carter, Herbert Asquith’s daughter, arrived. Sir Winston was delighted to see her; he became very animated. She was a tonic.

In the morning, I was the last person Sir Winston wanted to see at 7.30am, bearing his tablets.

I turned to see Mr Newman, the orthopaedic surgeon, standing behind me with a bemused smile. He repeated to Sir Winston the importance of the medication. I heard that Mr Newman later said to a doctor friend of mine, ‘My goodness, Sister Keefe [my maiden name] has Churchill under her thumb.’

Sir Winston really hated physiotherapy and wasn’t very communicative with the patient physiotherapist. When I encouraged him to do a simple straight-leg-raising exercise, he stared me out. I threatened to tickle his foot. To my delight, he suddenly chuckled and raised his leg. I am not sure who was having who on.

One late morning, a small bottle of Pol Roger champagne arrived. I had never opened a bottle of champagne, and twisted the wire the wrong way. I looked up, straight into the mirror above the washbasin, and saw him watching me with much amusement. I smiled back and was treated to one of those lovely smiles.

When the fractured hip healed, Matron told me she was taking me away from Sir Winston. I told Lady Churchill. She thanked me profusely but asked me not to tell him until I actually said, ‘Goodbye.’ She said he wouldn’t want me to go and would make a fuss.

Montague Browne offered me a nursing post at Churchill’s house in Hyde Park Gate. I declined; it wasn’t the kind of nursing I wanted to do. I later spent 25 years as sister-in-charge at Kent College, a Methodist boarding school in Canterbury. But I will always be grateful to the Middlesex for giving me the chance to care for ‘The Great Man’.

When the time came to say goodbye, he was sitting in a low armchair after lunch. I sat on a footstool on the floor beside him, to be at his level, so he could hear better. He stroked my cheek and said, ‘My pet lamb.’ He then held my hand and, with complete eye-to-eye contact, said, ‘Thank you.’

It was a beautiful, rewarding moment for me, never to be forgotten.