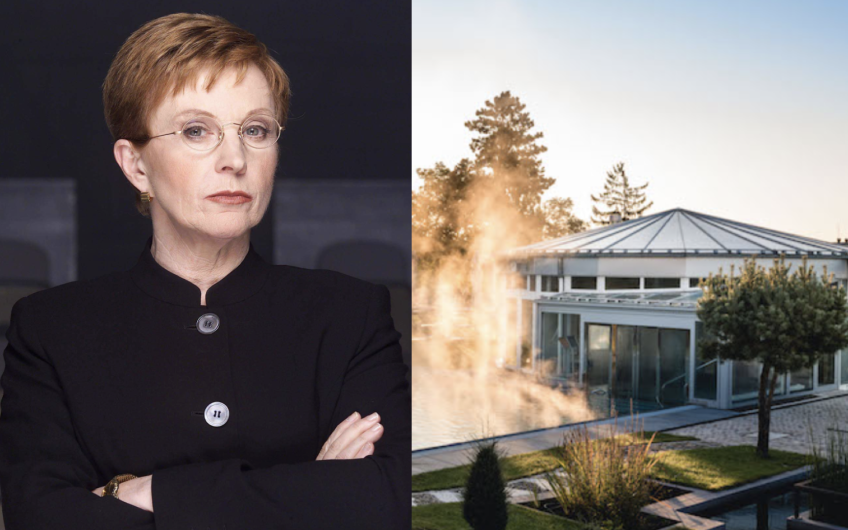 I’ve spent most of my life trying not to be fat.
I went to my first health farm aged sixteen. My mother, very much of the Harvey Nichols tendency, thought it an excellent way for me to recover from the trauma of taking my O levels.
Champneys at Tring is now a ritzy retreat. While in the early 60s it was mostly a popular choice for the sick and dying. Patients were put on a three-week fast of lemon and hot water, plus massage, osteopathy and hateful colonic irrigation to rid you of toxic waste.
This severe regime went back to the 1900s and the founder of Champneys, Stanley Lief. As a young man in Russia, he’d been diagnosed with a chronic heart condition and promised a short life expectancy. He cured himself with a programme of fasting and exercise.
The problem for me was I didn’t have a severe heart condition or a love of hanging out with old sick people. By day three, I realised that sitting in my bleak boarding school was preferable to being starving hungry. Never again, I resolved, would I subject myself to food deprivation.
Since then, I’ve tested the temperature at an embarrassing number of wellness retreats. I’ve done just about every diet available: low fat, high fat, cabbage only, fruit one day, fish and greens the next. They’ve all failed.
Apparently, Weight Watchers, which I’ve also tried, has now turned cool and signed up trendy, celebrity ambassadors, banished the word dieting and moved to a holistic approach. However, Oprah, a zillionaire, is another ambassador and, judging from her shape at the Meghan/Harry wedding, she’s been missing her meetings.
I’ve no idea why some people stay trim but the majority of us don’t. I mention Oprah’s wealth and my struggle, because George Monbiot, the self-righteous, vegan Guardian columnist suggests that ‘obesophobia is often a fatly-disguised form of snobbery’ and it’s the Government which needs to show restraint. He believes jobless, poor people in Britain struggle with obesity more than bright, middle-class ones. This surely too smacks of snobbery.
Anyway, it was my best friend Pam who came up with the solution. From our teenage years, we’ve been longing to lose a stone by six o’clock the same day.
Pam discovered and urged me to try a place in Germany.
There was nothing about the name – Buchinger Wilhelmi - or the destination – Uberlinger - that suggested it was flashy or plush; a clinic, definitely not a spa. There are doctors in white coats on health watch. Efficient German nurses weigh you each morning. The menu is a cup of herb tea and a spoonful of honey in the morning. Some thin vegetable broth at midday; the same in the early evening. On offer is massage, osteopathy, reiki, physio and dozens more treatments.
Yep, you’re right. Exactly the same zealous fasting method I’d endured in my youth. But I gave it a go.
It astonished me that there was a daily two-hour hike, albeit voluntary, leaving at six o’clock in the morning. Why would anyone want to trudge uphill through a forest on an empty stomach when they could stay in bed feeling sorry for themselves?
Each day started with an appointment with the nurse, who weighs you and takes your blood pressure. Every other day an enema; the same, hateful colonic irrigation of water up your backside for ten minutes to cleanse the colon.
The first time I went five years ago, I did nothing but sleep for the first few days and regarded the idea of any exercise as unthinkable.
But bafflingly, on day three, the hunger pains had gone. Instead, I set my alarm clock and joined the hikers. I know I am sounding like a born-again but, within a few days, I had enough puff to manage not only a hike but 20 or 30 lengths in the outside heated pool, a run late afternoon or a session with a trainer in the gym.
Don’t ask me to explain how I could do more on an empty stomach than I’ve ever been able to do at home after a full breakfast. Or if it’s a coincidence that, in the early 1900s, one Dr Otto Buchinger, a German naval officer, seriously ill with rheumatic pain, cured himself in much the same way as the founder of Champneys.
After two weeks, I was down nearly ten pounds.
I now go back for a fortnight each year. My choice of holiday. It isn’t cheap but about what it would cost me to sunbathe in Florida.
My back and knee joints stop aching, any infection I might have disappears and, most importantly, my spirits rise. I now need to knock off only a few pounds.
Official research on the benefits of fasting suggests a high chance of recovery is possible from thyroid conditions, irritable bowel syndrome, depression, psoriasis, type 2 diabetes and much more.
I’m not delusional about becoming overweight. It’s because by nature I’m greedy. I don’t blame the government. Or think that self-restraint is better practised by rich people.
I’m an addict - be it alcohol or sugar. I find it easier to abstain than attempt moderation.
Forget the latest miracle fat-burning pills from America. Or the 5:2.
I’m now a hot gospeller for the fourteen-zero.