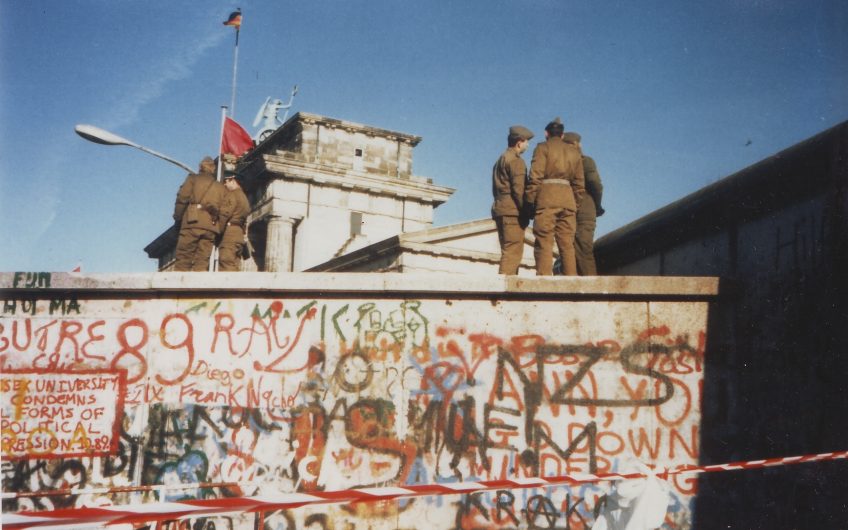 It’s 31 years since November 9, 1989, when the East German government announced that all its citizens could visit West Berlin and West Germany – and so began the fall of the Berlin Wall.

It’s also 35 years since I went to work in an old people’s home right up against the Wall in what was then West Berlin.

In many visits since, I have never ceased to be amazed and enthralled by the way the city continues to grow, evolve and wrestle with its past.

Since the fall of the wall in 1989 and the reunification of Germany a year later, Berlin has become the most protean and pragmatic of the great European capitals, undergoing constant revolution in terms of its geography, art, cuisine, and (I am told by younger friends) clubbing, always looking to the future while displaying the scars of its past.

By November 2017, Berlin passed another milestone: from then on, the wall had been down for longer than it was up. In hindsight, its existence seems not only cruel and brutal but downright absurd. You’d think it would put politicians off the idea of erecting walls, but it hasn’t.

You can’t see much of the wall now. There’s a decorated stretch known as the East Side Gallery alongside the Spree River near Warschauer Strasse, some slabs at Bernauer Strasse, and some re-erected sections at the Checkpoint Charlie site and Potsdamer Platz, with a few chilling watchtowers dotted around.

Some signs of division that lingered after its demolition – streets with BMWs at one end and Trabants at the other – have also vanished.

Others remain. Flying in, you see the dormitory blocks of the Eastern outskirts, and the concrete spike of the Fernsehturm (television tower) in the centre of DDR-era Alexanderplatz: the once-great square remains an intractable brutalist wasteland today.

The last time I was here, 13 years ago, British architect David Chipperfield was still working to reincarnate the New Museum, the first of the five great cultural institutions on the Museum Island in the Spree to be rebuilt as part of his masterplan.

Now the New Museum’s Egyptian collection, including the exquisite Nefertiti bust, is displayed against minimalist interiors that preserve wartime bomb damage and evidence of Cold-War neglect.

The nearby 15th century City Palace was completely demolished by the puppet GDR government in 1950, and the Soviet-modernist Palace of the Republic put in its place. That building was also razed and the City Palace has been rebuilt, or reimagined: it reopened this September.

Why all this reconstruction? For a city so heavily bombed and then scarred by vengeful or ideological demolition, a remarkable number of historical buildings survive, many enhanced or renewed, without the need to recreate ersatz versions. The opera house, Catholic cathedral, Humboldt University and other palaces and churches along the historic avenue of Unter den Linden are all now restored. The Kaiser Wilhelm Memorial Church at the top of the main shopping street, Kurfürstendamm, remains a potent symbol, though Berliners hate it – with its remaining original tower gutted and shorn off, it has been fitted out since 1963 with an internally beautiful geometric chapel and belfry of blue glass and concrete.

Beside this is the deeply moving memorial to the six million European Jews murdered in the Holocaust, an undulating field of square pillars built to different heights that engulf and overwhelm the adult visitor, but prove an oddly fitting hide-and-seek playground for children. Construction of the monument was halted in 2003 when it was found that the company supplying it with anti-graffiti paint was also connected to the supply of poison gas to the death camps during the war.

All the Jewish institutions and memorials – the Moorish New Synagogue near our Airbnb apartment, Daniel Liebeskind’s deliberately disorienting Jewish museum – have police guards. You see what I mean about Berlin constantly struggling with its past?

Yet it is such a liberal, liveable city: artistically fertile, friendly and efficient but still a little bit louche. Along with the ongoing public atonement for its wartime guilt and shame, there is a pride in the intellectual history of city and country.

Berlin does cultural institutions particularly well: apart from the New Museum and the neighbouring Pergamon, we were seriously impressed by the winding geometry and ravishing collection of the Kunstgewerbe (craft) Museum and the huge volumes of the former Hamburger Bahnhof rail station, now a temple to modern art to rival Tate Modern. A month after our visit, a friend was taking her daughter to hear Daniel Barenboim in the Philharmonie Concert Hall, built in 1963 but still startlingly futuristic, where I saw jazz great Oscar Peterson make his piano keys dance three decades ago.

Berlin also does food well. We had a hearty, classically German lunch of Schnitzel, pork and cabbage and beer in the decayed splendour of the mirrored hall of Clärchens

Ballhaus, a 1920s dancehall near our apartment in the Scheueunviertel.

More sophisticated fare – deer ribs; halibut with pears - was on offer at Lokal, also nearby, which, as its name suggests, abides by the fashionable dictum of local produce but does so in an easy-going manner.

At Cecconi’s, in the ground floor of the Soho House hotel and members’ club – originally a Jewish department store, later the HQ of the Reich Youth Leadership, and then the Communist Party’s Central Committee - waiters spoke English before I could even crank my rusty German into life.

You can also eat well and cheaply in Turkish, Indian and various vegetarian restaurants, or opt for the unclean pleasures of that bastardised Berlin speciality, the Currywurst, from a street stand.

Berlin is the size of London, with less than half its population; the centre is uncrowded, and walkable for the energetic. The public transport, without resorting to stereotypes about German efficiency, is brilliant, the elevated S-Bahn trains offering fine streetscape views.

New architecture tends to be low-rise and manages to be daring yet somehow to fit in: again, a legacy of Berlin’s history of destruction and renewal.

Both high and low-end shopping needs are catered for in department stores like KaDeWe and Peek und Cloppenburg, boutiques (check out the Hackesche Höfe) and fleamarkets. The aforementioned younger friend told us that it is still the place to be for dance music clubs, ‘not to mention sex clubs’, and that the ‘city comes alive at 11 o’clock’. We took his word for all of the above.

What does Berlin do badly? Well, although high fashion and street style are on the cutting edge, this is still the spiritual home of the mullet and double denim. Apart from the massive Tiergarten, central parks tend to be scrubby and bleak, though I know from my time living here that the city’s peripheral woods and lakes are idyllic. And there’s a lingering officiousness: thirty years ago, a friend of mine was confronted at a swimming pool with a sign saying, ‘Today, breast stroke ONLY.’ This year, a teenager scolded me for crossing the road on a red pedestrian signal.

But really, for me, the only thing Berlin doesn’t do is disappoint. It’s not hectically pressured like London or New York, suburban like Amsterdam or Copenhagen, or pretentious and pristine like Paris, yet it contains the best elements of all of these.

And every time I go there, it shows me a new face.

BA flies to Berlin from the UK, return from £109