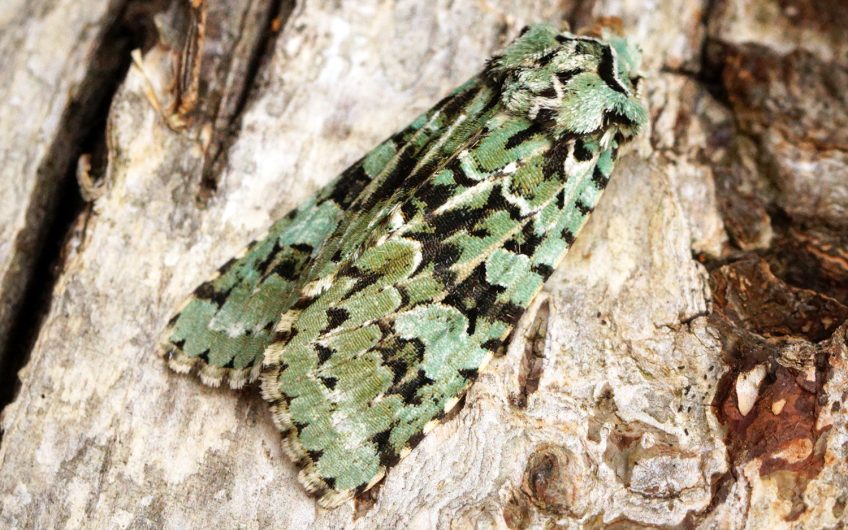 Caroline Moore, who's recorded 850 moth species in her Sussex garden, sings the praises of her five favourite finds

My hobby (aka obsession) is ideally suited to my advancing years.

At present, I am still able to birdwatch while I walk the dog, and to weed the garden; but when I am too doddery to do either, I will still be able to keep my log of the local moths.

The joy of moths lies not only in their underrated beauty and their incredible variety, but in the fact that if you possess a moth-trap with a mercury vapour bulb, they will come to you.

Birds, you may claim, come to a bird-table – but the numbers are simply not comparable. After a nice, muggy summer night, one can find hundreds of species, and easily a thousand individual moths, waiting in the trap of a morning.

I have so far recorded 850 species just in my own East Sussex garden, with an old Robinson trap set up on the terrace by my house. Some of them have been exciting finds – 65 of them are rare enough to qualify as Nationally Scarce, and eight are Red Data Book species. A couple have never before been found in Sussex.

We moth enthusiasts, who send photographs and other data to our County Recorders, can claim to be an army of citizen scientists: our efforts are important because moths are an internationally recognised marker for biodiversity. They are particularly susceptible to air and light pollution, and to agri-chemicals; so a healthy population of moths is a sign of the health of the countryside.

And what beauties they are. Even the commonest can take one’s breath away: you can find the trap shimmering, for example, with ten or more Elephant Hawkmoths. These have a wingspan of about two inches, and are golden, olive-green-striped with shocking pink. Like all moths, their wings when fresh are feathered with fragile, glistening, light-diffracting scales.

My trap is older than I am, and was inherited from my grandfather. It is one of the earliest commercially available moth-traps, bought from Watkins and Doncaster – a Victorian firm, which is still selling equipment today. The Robinson moth-trap is largely unchanged, though now made of plastic. It is still the best, both for the number of moths it attracts, and for the design, which lures them down a funnel into the drum beneath, preventing escape.

Eggboxes placed in the bottom of the trap give the moths a place to rest quietly, preserving the beauty of those fragile wings, until they are released unharmed in the morning.

The only downside is that the 125v mercury vapour bulb, emitting a spectrum of light which is especially attractive to moths, is bright enough to cause complaints if there are fussy neighbours close by. A trap with an actinic bulb, such as the cheaper Heath trap, may then be preferable – though the catch will be less, and actinic bulbs cannot compete with other light-sources in built-up areas.

In a good site, the chief difficulty a newcomer to moths will face will be the sheer numbers awaiting identification. There are over 2,500 species of moth in Britain – only two of which are likely, as larvae, to eat your cashmere cardigans.

Beginners should start with the larger species; and there is only one book I would recommend to help with identification – the Field Guide to the Moths of Great Britain and Ireland, by Paul Waring and Martin Townsend, which shows the moths in their living, resting postures, rather than splayed out like dead specimens in a cabinet.

Do not be seduced into buying a photographic identification guide: Richard Lewington’s life-size drawings brilliantly capture the quintessence of the moth, subtly enhancing, without caricature, the crucial diagnostic features.

This book covers the 896 “macro” species. If you need the companion guide to the micro-moths, by Sterling and Parsons, you will probably have become, like me, an addict.

My husband says he has already decided upon my epitaph: “Caroline, Beloved Wife and Moth-er”. Richard Lewington says his family have opted for “An Enthusiastic Bugger.”

The Merveille du Jour is particularly marvellous because it flies in October and November, when moth numbers generally are in decline.

It is exceptionally beautiful, when glistening and freshly hatched. Dead specimens in a collection will rapidly fade, losing the green. Despite its vivid patterning, it is well-camouflaged when resting on patches of lichen upon the oak trees where its larvae feed. The adults feed at ivy flowers. Not all adult moths feed: many of the smaller and less highly evolved species lack mouthparts altogether.

This is the magnificent and rare Blue Underwing, which is making a comeback in Britain, after being hounded to extinction in this country by Victorian collectors. There are now several colonies breeding near me in Sussex, and they turn up in my garden. We hear a lot about species becoming extinct; less about species which return, or indeed new arrivals. More than 125 new species of moth have been spotted in Britain this century. Many arrived here after hitching a ride (like the Spiny Bollworm found in Buckingham Place after a visit by a Tanzanian delegation), but some become “adventive colonists”, staying to breed.

This is one of the “micro” moths, the smaller and more primitive species. Its forewing is less than ¼ inch long. It is not only pretty, with sparkling metallic bands, but also rare - a proposed Red Data Book Species. I have found it in my garden six out the last seven years. One year, a fellow moth enthusiast from the Midlands took a two week holiday nearby, purely in the hope of photographing one. Fortunately, two more specimens did turn up that year. I was very amused to meet the enthusiast’s resigned wife and ferociously bored teenage son, for whom this was evidently not the holiday of their dreams.

I wanted to picture one immigrant moth: these are moths which visit our shores under their own steam, rather than on imported plants, but do not usually breed. I was tempted boastfully to post the very rare Great Dart moth, which I was thrilled to find in my trap last season; but the commoner Convolvulus Hawkmoth is more spectacular. It is huge, with a four-inch wing span. I plant Nicotiana flowers next to my moth trap specifically to attract it: it will hover to drink the nectar with its long proboscis. Its larvae feed on bindweed, but it never seems to establish breeding colonies in this country.

Another common species, but one I love. It is cleverly imitating a broken birch-twig, with the buff areas round the thorax and at the tip of the wings looking like chipped wood and the wings like silvery bark. Their caterpillars feed on birches and other numerous deciduous trees. I often marvel that, during the day, one sees so little of the teeming moth-life that surrounds us (though 103 species of moth do fly by day, or are regularly disturbed from vegetation); this example of beautiful camouflage shows why.