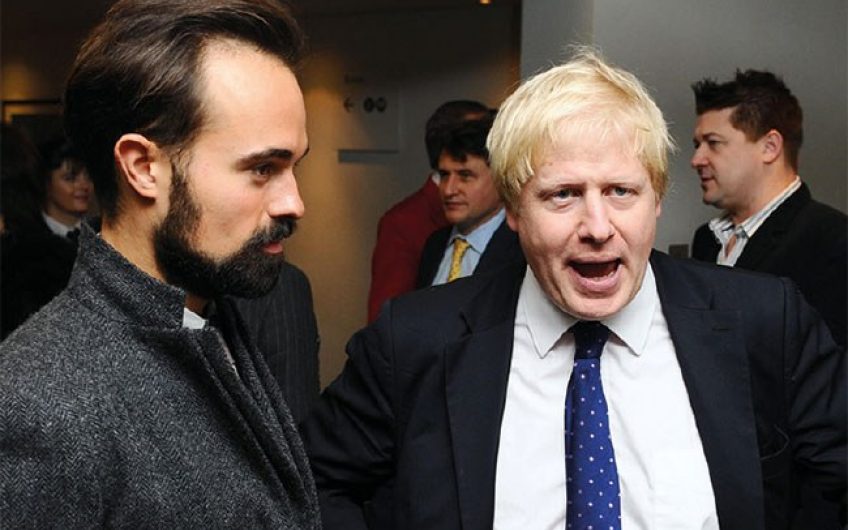 For ten years, Matthew Norman worked for the Russian media mogul and mingled with his celebrity pals in London, Sussex and Umbria

Half an hour into my first Evgeny Lebedev Christmas drinks party, it occurred that the only person in the room I didn’t recognise was me.

His central London flat had been magically transformed that 2015 evening into a kind of animatronic Madame Tussauds, thronging with scores and scores of the globally famed jostling for space.

The corridor to the main reception room was too rammed to penetrate – so I nipped for Dutch courage into a side room with a bar.

As the tender poured, I glanced nervily around. Alone on a sofa in the corner, so still she might have been in cryogenic stasis, was Shirley Bassey.

Eventually, a former colleague wandered in, and we spoke in hushed awe about the mescaline-fuelled surreality of this, the professional autograph-hunter’s wettest dream.

‘Mind you,’ I murmured, ‘I’ve just spotted another civilian. That portly black guy over there…’

‘Ah yes,’ said the old colleague, ‘that’s the President of Gabon.’ At that moment, someone – Ginger Spice, perhaps, or the late Sonny Liston (one forgets) – meandered over to ask the president, Ali Bongo, how things were back in Libreville.

Whether Lebedev’s career as history’s most assiduous collector of the celebrated can survive his ermine-robed controversy, time will tell. Friendships built on sturgeon eggs and wood-panelled executive jets are notoriously vulnerable when a mild zephyr of public opinion becomes a typhoon.

But whatever and wherever the noble Lord’s future, his past establishes him as one of modern Britain’s most emblematic and intriguing presences. Who is this man, and what is his game? Although I’d indirectly worked for him for years as an Independent and Evening Standard columnist, I first met him about a decade ago at dinner with a shared friend.

While his erstwhile KGB dad Alexander stayed in Moscow leading (or affecting to lead) the resistance to Putin, the son was bestriding glitzy London like a neatly bearded, mildly accented colossus.

I liked him. He was unpompous, mischievous and smart, and an astonishingly good listener.

After that evening, my favoured servant status brought sporadic invitations to meals and parties. I was the equivalent of the local GP in an Agatha Christie, asked to dine at the great house now and then to make up the numbers for bridge. Besides, the grand need a sprinkling of little people to magnify their grandeur.

I was at the legendary garden party in Hampton Court where, two days after the Brexit vote, Lebedev posed with Rupert Murdoch and the Union flag-shoed Farage while an admirably drunk Lily Allen live-tweeted with photos.

By then, the invitations had become supplemented by summonses. At shortest notice, I was commanded to a mock-medieval hotel in Sussex for dinner. The media tsar had acquired a cable TV channel, and had some notion of presenting a satirical show himself. I think he wanted me to write it, and appear on screen as his sidekick.Blessedly that came to nothing but, over breakfast the next morning, he spoke fascinatingly of a grandfather who served as Under-Secretary for Food Production in Stalin’s wartime cabinet. I never heard a syllable about Russia’s present dictator.

It can’t have been any easier being him than anyone else gifted enormous wealth too young. Within 15 years of being able to afford Elton John LPs only at car-boot sales, he was flying Elton – not to mention a certain Foreign Secretary and future PM – to his Umbrian palazzo.

I made the journey once myself, albeit on easyJet rather than privateJet. He summoned me the week before Trump won the 2016 election, plainly intending to sack me. I was of minor use to him as the author of theatre-awards speeches and ghostwriter of occasional articles, but perhaps he was mildly fond of me as well. Whatever the explanation, a visibly nervous Lebedev bottled it, and we sat up drinking instead with a few members of his staff.

It was like being with Princess Margaret on Mustique. No one could retire until he did. Having been up since 4am for the flight, by 5am the next day, with at least a litre of vodka in me, I was edging towards fatigue.

The hangover cure he later conjured was a novel one. Revelling in his 007 baddie image, but slightly improving on the fluffy white cat, he introduced me to Boris and Lara, his pet wolves. However appalling the human Boris looked when returning from his visit, I looked worse.

A year later, the self-awareness and lack of pomp I had found engaging at that first dinner was replaced by imperious paranoia. An email arrived from someone with the unwittingly hilarious job title Chief of Staff to Evgeny Lebedev.

With it came an attachment. Although, pre-Weinstein, the non-disclosure agreement had yet to acquire its current reputation, this one seemed sinister enough.

For the lavish consideration of £1, it compelled me never to disclose a dickie bird not only about Lebedev, but about anyone who ever set foot in any of his personal and business premises. It also sought to impose a legal duty to prevent others from speaking disparagingly about him, or to report anything of the sort to his representatives. References to these obligations surviving my employ hinted that again he wanted to sack me.

I told the Chief of Staff that, what with being a journalist, I couldn’t conceivably agree to this; but that if he sent me one restricted to commercially sensitive information to which I’d been privy, I’d consider signing that. The Chief asked me to lunch and handed me what he called ‘a less thermonuclear’ NDA. I stuck it in a drawer, unread, and forgot about it.

My final encounter with this riddle wrapped in a mystery inside an enigma came at his 2019 Christmas do, the night after the general election.

Among that familiarly Tussaudian crowd, a triumphal Johnson pitched up to kiss the ring. I left soon after that (one must retain some standards about the company one keeps).

The very last time I set eyes on Evgeny Lebedev, he was in his usual hostly position. He stood on the outskirts of the room, looking blankly yet anxiously on as his guests edged towards the caviar.

As so often, he struck me as a character transposed from the work of F Scott Fitzgerald. A lost, vacuous, melancholic young man using wealth of dubious provenance to entertain those whose approval he craved for reasons he couldn’t begin to fathom, let alone explain. The Great Gatski.