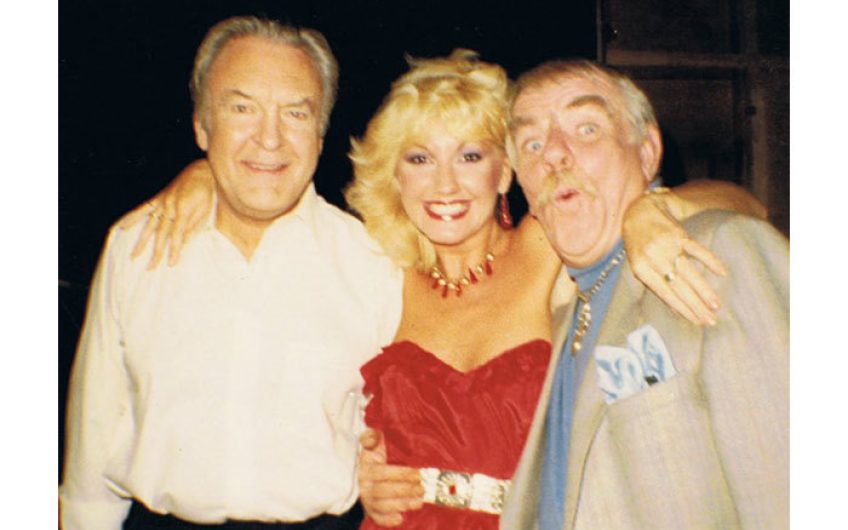 Remembering the great Windsor Davies, who would have been 89 today. Roger Lewis pays tribute to his fellow Welshman

Windsor Davies, who died earlier this year aged 88, had a very narrow range, doing nothing much more throughout his career than a lot of shouting and expostulating, rolling his eyeballs, his moustache twitching. He was a human cartoon of bristling irascibility, his swagger stick quivering.

Davies (pictured with Donald Sinden and Susie Silvey) was best-known for It Ain’t Half Hot Mum, where he played a Battery Sergeant-Major in charge of a National Service concert party. Made in the seventies, it quickly fell afoul of political correctness and was never repeated on terrestrial television – Michael Bates was blacked-up and wore a turban, the Indians were portrayed as head-wobbling goodness-gracious-me types, and the soldiers entertaining the troops were sneered at, by Davies’s character, as ‘a bunch of poofs’.

Davies, his chest self-importantly puffed up, was popularly teamed with the diminutive Don Estelle, who wore a pith helmet and comically wide khaki shorts. They made a record together, ‘Whispering Grass’, which in 1975 did well in the Hit Parade. ‘Sing, Lofty, sing !’ Davies exhorted his companion, who was clarion of voice.

Estelle, however, ended his days busking in Rochdale shopping centre. With It Ain’t Half Hot Mum kept from general view, and not released on video*, the cast received no generous repeat fees – unlike the actors in that other Perry and Croft classic, Dad’s Army, never off our screens for longer than a week, who made fortunes. Davies was saved from an impecunious fate because he’d been in Never the Twain with Donald Sinden, a sitcom about rival antiques dealers, which ran for ten years from 1981.

Davies was also in a couple of Carry Ons, and in Confessions of a Driving Instructor, where he played Lynda Bellingham’s father, who goes beetroot-purple in the face when he comes home and Robin Askwith has tipped over the aquarium, and Lynda’s cleavage is full of guppies.

For some reason, in that film, Davies wears a kilt and speaks with an approximation of a Scottish accent. He was of course Welsh, sort of. He was born in Essex, worked as a schoolteacher in Staffordshire, and after his career came to an end retired to France.

*A DVD boxed-set was released in 2010. Don Estelle died in 2003, too broke, he confessed to me on the phone, to afford the train fare to my launch party at the Groucho Club for The Man Who Was Private Widdle, my biography of Charles Hawtrey.