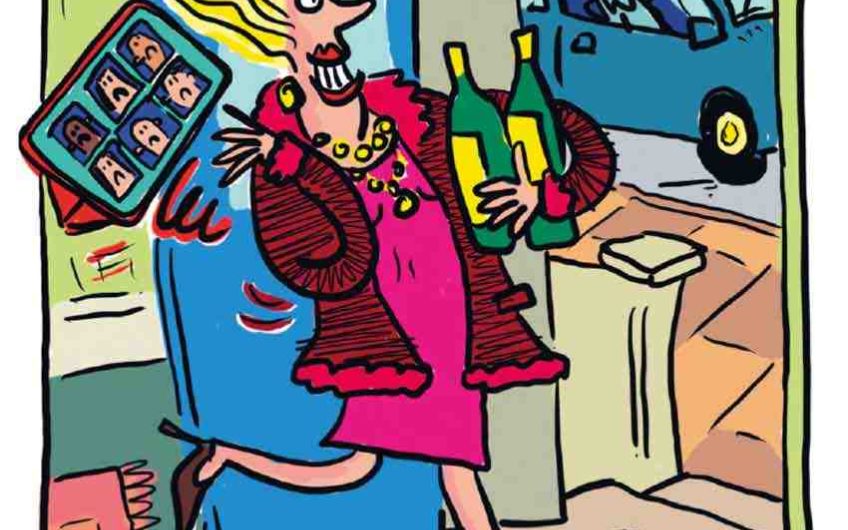 In lockdown, the Duchess of Beaufort enjoyed literary parties – held by the Great Gatsby and Mrs Dalloway. Will the real thing match up?

The last party I went to was on 4th March 2020. It was a bustling and glamorous book launch for Julia Samuel’s This Too Shall Pass: Stories of Change, Crisis and Hopeful Beginnings. Talk of coronavirus hovered over proceedings but we were all unaware of the gravity of the situation and the extent of the disruption to our lives that lay ahead.

Nobody really knew how to behave. Some were hugging; others were tentatively elbow bumping or blowing kisses across the room. A few had chosen not to come at all.

By the time my review of This Too Shall Pass was published in late March, we were heading into lockdown.

For much of 2020, I had no thought of parties at all. Addicted to the grim daily stats and permanently worried about family, friends and the future, I was grateful if I made it through lunch without experiencing social anxiety.

It wasn’t until earlier this year, when I received a save-the-date for a post-lockdown party, that I was hit with a lurching panic. Would I have to learn again how to enjoy parties? Did I even miss them?

My earliest understanding of good parties came from children’s books. I would spend hours poring over Maurice Baring’s Forget-Me-Not and Lily of the Valley, where the Lizard holds a ball on the last night of spring so that the spring and summer flowers can meet: ‘All the Butterflies were there, of course, and the Primroses, the Cowslips, the Wallflowers whom nobody danced with ... the Sweet Peas, who enjoyed themselves wildly.’

Richmal Crompton’s William the Conqueror provided a robust method for dealing with unwanted party guests (‘But I don’t wanter do anything dignified. I wanter fight ’em’). In Asterix and the Banquet, I learnt that no effort should be spared in pursuit of the perfect menu.

The real parties I attended as a child were less exciting than those I read about – although I remember gorging myself on a glorious buffet at a children’s birthday party held by David Dimbleby and his then wife, the cookery writer Josceline Dimbleby, after which I was sick all over my party dress on the way home.

At a party held for their children by the MPs Peter and Virginia Bottomley, all the guests (aged about seven) were subjected to a series of fiendishly difficult quizzes before tea. My great-uncle, Pascoe Grenfell, a retired soldier, held very enjoyable children’s parties that seemed to consist entirely of us standing at a dining-room table watching his large collection of clockwork tin toys dance, march and bang drums.

Aged 14, I read Anna Karenina. Entranced by the description of Oblonsky’s ball, I found almost all subsequent teenage parties a deep disappointment in comparison. The average 1980s disco in somebody’s basement did not much resemble Tolstoy’s ‘gauzy, ribbony, lacy, colourful crowd of ladies waiting to be invited to dance’.

At university, there were plenty of parties, one or two of which were possibly quite memorable – although I subscribe to the view that if you can remember Oxford in the late 1980s, you weren’t really there.

Having read The Great Gatsby, I was always half-hoping to come across a party in ‘blue gardens’ where ‘men and girls came and went like moths among the whisperings and the champagne and the stars’. Sadly, those parties that were billed as a feast of glamour and hedonism were, in reality, more like an amateur dramatic society doing a lame version of The Rocky Horror Show.

In Mrs Dalloway, it is the preparations and not the party itself (‘They would come; they would stand; they would talk in mincing tones’) that feature most. After reading the book in my early twenties, I was struck by the thought that perhaps I preferred being the host and not the guest. Mrs Dalloway’s ruminative planning as she goes about her day is not just an expression of existential crisis; she also wants to give everyone a good time.

Over the years, it has been by giving parties that I have learnt to enjoy going to them. There is no magic formula. A bit of planning helps (even if it is not Clarissa Dalloway-style flowers and silver polishing) – and never run out of alcohol.

In the end, a good party is simply a joyful contract between host and guest (the Latin word hospes can mean both) to come together to give and receive pleasure. ‘How awfully good of you to come!’ Mrs Dalloway says to her guests as they come up the stairs. ‘And she meant it.’

In March, I attended the Zoom launch party for Simon Heffer’s edited diaries of that consummate chronicler of parties Henry ‘Chips’ Channon. Instead of squeezing into a crowded bookshop, the ‘guests’ watched Heffer being interviewed online by Michael Gove.

It was a fascinating discussion. But it definitely was not a party. I think I do miss them after all.

Oldie cartoon predicts the discovery of a 20,000-year-old mammoth fridge