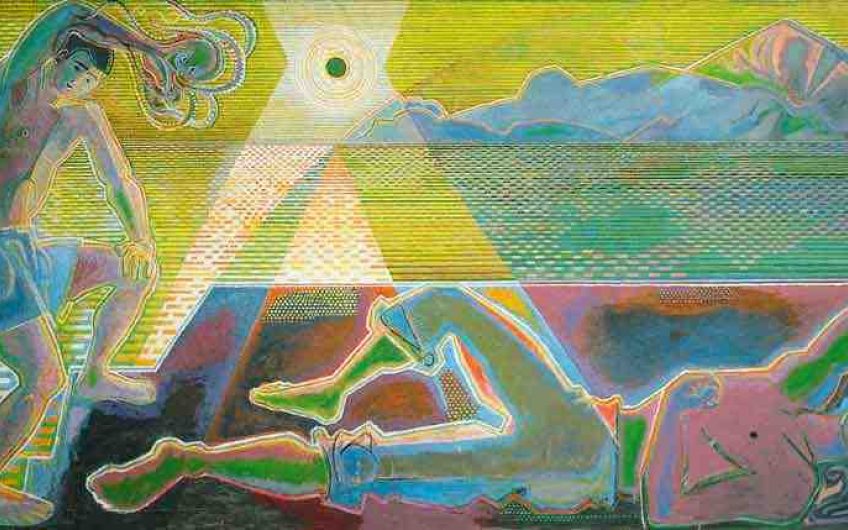 Two Figures and Setting Sun, 1967. On Hydra, a fisherman, left, dashes an octopus on a stone while a sponge diver, right, recovers from plunging to the depths. Craxton often stayed at the Hydra villa belonging to artist Niko Ghika
View Full Size
1
of 1

Until John Craxton (1922-2009) found himself in Greece in 1946, almost every Craxton portrait had been an emblematic – near to far distant – likeness of himself.

Now, as if by magic, he became a consummate portraitist of others. Youthful self-absorption was blasted away by Aegean light and life.

Preferring to record specific portraits in swiftly made drawings, rather than within the more distilled, imaginary and gradually evolving elements of his paintings, he said:

‘I arrived in Greece knowing I couldn’t draw, but I would sit down in front of a man, say in a marketplace, surrounded by hordes of children, and somehow think myself into the man, allowing his image into my personality and then drawing almost unconsciously. I got amazing likenesses in 20 minutes. They thought it was uncanny. I’d made myself into a machine – a camera.’

On the island of Poros, Craxton began to relish some of the deepest satisfactions of Greece – what he termed ‘the persistence of myth in everyday existence’. Names seemed to confirm this, being handed down from grandparent to grandchild (such as Sophocles, Pericles and Electra).

Ordinary people in rural areas still eked out livings in confined landscapes; but in an expansive, storytelling culture, with a view of the cosmos recognisable to Homer.

The young Englishman had only to enter a simple, rustic church to glimpse the glories of Byzantium, while appreciating that old centres of Christian worship were likely to have been built on older temples – and that caves dedicated to St Anthony were sacred to Pan.

‘Crete is a country in its own right and the landscape full of new ideas, forms – shapes and colours. The people of Chania are incredibly kind and helpful and I feel very happy here.’

In 1992, he described how his painting questions were resolved in the clear air of Crete:

‘There’s very little mist in the atmosphere of Greece. It’s very clear; one can see very far and very close with the same amount of clarity. One doesn’t get a tonal perspective; one gets a structural perspective.

‘The Byzantine painters were terribly clever at that. The good ones invented perspective – exactly what the Cubists thought they’d invented...

‘One of my objects in life is to try and find a way of expressing something real by unreal means. As Picasso says, art is a lie – but a lie that helps you make a truth.’