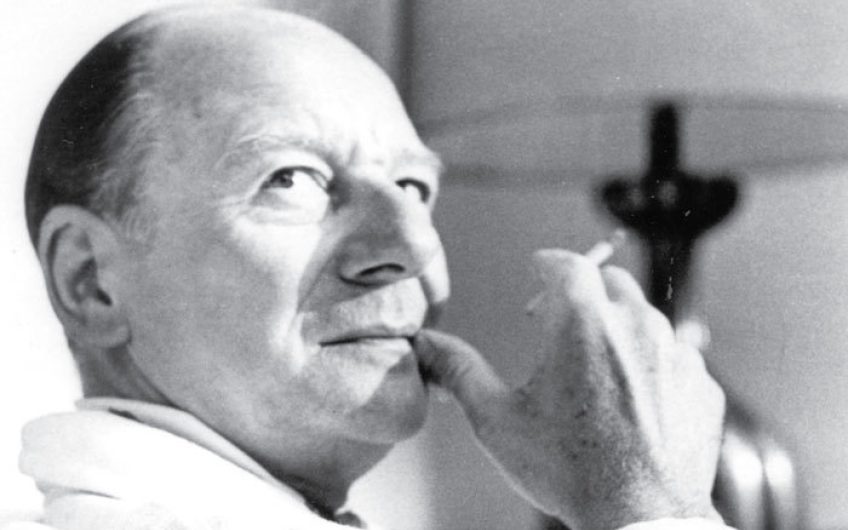 It must have been more than thirty years ago, and long before I was elected a member, that I spotted, one evening, in the upstairs bar of the Garrick Club, both Robert Atkins and Sir John Gielgud together; not actually among the same party – they had little in common – but astonishingly in the same room.

I say astonishingly because it struck me that at the time they must have been unquestionably the two most imitated men in the English theatre. Every young actor could ‘do’ a Robert Atkins (‘Now, listen here, old son’) and a John Gielgud with facility. Bob Atkins disappeared years ago, and with him some splendidly foul-mouthed anecdotes, and I doubt many outside Regent’s Park remember him now; but several journalists, after his death at the end of May, aged ninety-six, wrote stories and reminiscences about John Gielgud, usually repeating the same old ones and in some cases misquoting them, so it struck me this might be the correct moment, and The Oldie the correct journal, to recall one or two which are less familiar.

I find it difficult to credit that the much-quoted gaffe Sir John made to Elizabeth Taylor – that Richard Burton ‘married some terrible film star and went to live in Hollywood’ – is genuine, simply because it seems to me direct, snobbish and rude, and none of these are characteristic of Gielgud’s humour, conscious or otherwise. Although he did say, when somebody enquired of the career of Claude Rains, ‘Oh, I think he failed, and went to live in America.’ But, obviously, not to his face. He was hardly ever malicious, and never wilfully so, and if he was – as when he was discussing casting for Much Ado About Nothing with Michael Redgrave, and commented, ‘Oh, Don Pedro is one of those tall, dull parts for tall, dull actors. You’d do it very well, Michael’ – it was more absent-minded than insulting.

Most of his celebrated gaffes were involuntary and innocent, a quality which heightened his great flair for high comedy. There was never a Benedick to match him in spontaneity, wit and, perhaps unusually, virility. Almost everything he said seemed to be somehow by accident, as if he lacked what most of us are born with, a split-second safety mechanism, the warning signal between thought and declaration. When somebody said to Sir John, just as he turned away from speaking with a fellow-player, ‘I never knew you knew so-and-so,’ and Sir John said, ‘How could I ever forget those terrible ears?’ the young actor was in fact quite flattered. Nor was the designer offended who told John proudly that he was going to spend Christmas with the Oliviers, and he replied instantly: ‘With the Oliviers? But they don’t even like you!’ Actors were frequently heard repeating happily the gaffes he had made, particularly their own, to amused colleagues.

Gielgud told me himself that a recording exists (I have a copy) of a truly dreadful radio production of him as Sherlock Holmes, with his old companion, Ralph Richardson, as Watson, in which he pretends to be a coalman in disguise and utters the memorable line: ‘Good morning, matey, would you care for a bag of coal?’ in his customary golden tenor tones, and Watson replies: ‘My dear friend, Holmes, your voice, your face, are entirely unrecognisable!’ ‘It’s terribly embarrassing,’ said John, disparagingly. ‘Actors put it on and play it to one another late at night. They even ring each other up and play it over the telephone.’

I think I hoped, during my long association with him over the rehearsals and production of Forty Years On (Alan Bennett’s delicious comedy about an old-fashioned public school, which greatly contributed to John Gielgud’s ‘comeback’ in the 1960s), that I would be the recipient of one of these memorable gaffes, assuming myself, and my role, to be an appropriate target, and even felt a little deprived not to receive one. It took some time, but I need not have worried. At the end of the year’s run, he was appearing in Caesar and Cleopatra at the Chichester Festival Theatre. ‘Who’s directing?’ I enquired suspiciously. ‘Somebody called Robin Phillips, they tell me he’s rather good.’ ‘Yes he’s very good.’ ‘And quite young, isn’t he?’ ‘Oh, yes, he’s very young; we were both actors in our first jobs at the Bristol Old Vic.’ ‘Oh,’ said Sir John, ‘he’s not so young then.’

There was occasionally to be found a curious element of surrealism, a gentle intrusion of fantasy, which gave his conversation a kind of sweetness entirely of his own, as when he gazed compassionately up at the barrage balloons over Piccadilly in the last war and murmured, almost to himself: ‘Those poor dear boys up there, they must be terribly lonely.’

Jenny Agutter, tackling her first major Shakespearean role at the Old Vic, Miranda in The Tempest, in which Sir John was a memorable Prospero, told me he had turned to her in the wings on the opening night, seconds before their entrance, and almost as an afterthought said: ‘By the way, Jenny, I keep meaning to tell you, don’t worry about not being able to play Miranda; nobody ever could, not even Peggy.’ His dear friend Ingrid Bergman, in a Somerset Maugham play he was directing, had the line: ‘I was speaking to my mother on the telephone this morning.’ After a few minutes’ rehearsing on the first day, John interrupted: ‘Ingrid, dear, could we change your line about the telephone, and say: “I was speaking to my Scandinavian mother…”?’

Perhaps, if forced into a corner to answer that tiresome question – which is the best evening ever spent in the theatre? – I would say any one of the four times I saw John Gielgud in the superb Shakespearean anthology, The Ages of Man. Not only, among the famous set pieces, did one see performed to perfection Prospero, Leontes, Lear, but excerpts from roles he was too old to play any more, like Hamlet, Romeo and a peerless Angelo, and even parts like Harry Hotspur, which he would never have played, not even in his prime. After one of these performances, invited by a mutual friend, I was nervous and tongue-tied in his dressing-room, when the distinguished Finnish director Caspar Wrede came round, with his actress wife, Dilys Hamlett, who not long before had played Perdita with him at Stratford-upon-Avon. After a few moments of casual gossip, Sir John suddenly asked: ‘How’s Dilys?’ Pointing to his wife standing beside him, Caspar explained politely: ‘But this is Dilys.’ Without a moment’s hesitation, John said: ‘I meant Dilys Powell.’

I was a schoolboy in the early Fifties, and cycled all the way from Hampshire to queue most of the night for tickets to see his King Lear, with Alan Badel as a memorable Fool. Badel was renowned for being prodigal with criticisms of his fellow-actors, and as a young actor waiting in the wings for his cue, grew aware of Sir John as the mad King standing beside him, when he should have been entering from the other side of the stage. ‘Excuse me, Mr Gielgud,’ he whispered, ‘but shouldn’t you be coming on from the opposite side?’ ‘Yes, I know, but Alan Badel’s over there, and he keeps giving me notes.’

It is well known that his relationship with Laurence Olivier had always been uneasy, compared, for example, with his relationship with Ralph Richardson. But I remember with what generosity he praised Olivier for his Romeo, when they alternated roles in his own direction of the play at the Old Vic in 1935. ‘I probably had the edge as Mercutio,’ he remembered. ‘Larry was never very comfortable with all the swagger talk, and the poetry defeated him rather, but when it came to Romeo he was better by far than I was, because I did the verse, but he knew how to win the girl.’ And later, joking, he said to me: ‘Larry’s a very great actor, but I’m the aristocrat of the English stage.’

But when Olivier ran the National Theatre in the Old Vic, he appeared to invite Gielgud to join him in a series of misfires. Seneca’s Oedipus was hardly a success, and his brush with Molière failed entirely. Harold Pinter’s No Man’s Land, however, was an instant and self-evident triumph, with his great friend Ralph Richardson playing opposite. Gielgud modelled his characterisation of the poet, Spooner, on the dishevelled appearance of Wystan Auden, creating, for such a fastidious man, a shifty, seedy figure. The history behind the transfer to the Wyndham’s Theatre in the Charing Cross Road is complicated, but due, in part, to the gravity of Sir Laurence’s illness, which gave him no option but to revise drastically the Old Vic schedules, which had not been his original intention. When John Standing and Daniel Massey went together to the Wyndham’s Theatre, saw No Man’s Land and were knocked out by it, it was understandable that when they paid their respects backstage, they emphasised not only how marvellous it was for Sir John and Sir Ralph to appear together in a stunning new play, but how thrilling to have them both back in the West End!

‘I know,’ said Sir John, ‘it is rather thrilling. But the whole thing wouldn’t have happened at all if Larry wasn’t dead – I mean, dying – I mean, much, much better!’ Perhaps a rare example of the wish being father to the thought.

It is, after all, a genuine part of Sir John Gielgud’s legacy to us all – not only the greatest lyric verse-speaker of his time, the outstanding classical actor of the century and writer of a handful of entertaining theatrical memoirs, but finally the inventor of a totally original kind of personal humour, a source of fun and irreverence for future generations, something to savour and remember. Whoever thought it would be a brilliant notion to invite Sir John to direct Laurence Olivier and Vivien Leigh, both at the height of their powers, as Malvolio and Viola in Twelfth Night was unlucky. When he was taxed by somebody for getting it all so wrong, Sir John replied disarmingly: ‘Yes, I know – we all thought it was going to be good, and it wasn’t.’ It turned out to be a humourless catastrophe. Vexed by the failure of what she expected to be a personal triumph, the exquisite Vivien Leigh summoned the unhappy director into her dressing-room at the end of the Stratford run. ‘Johnny,’ she said, coolly and dispassionately, ‘it is well known you are the best-loved man in the theatre, by the public and your fellow-actors, but you must understand, so far as your career as a director is concerned, nobody in the entire English theatre is ever going to work with you again.’ There was a short pause. ‘Edith might,’ he said, ‘at a pinch.’