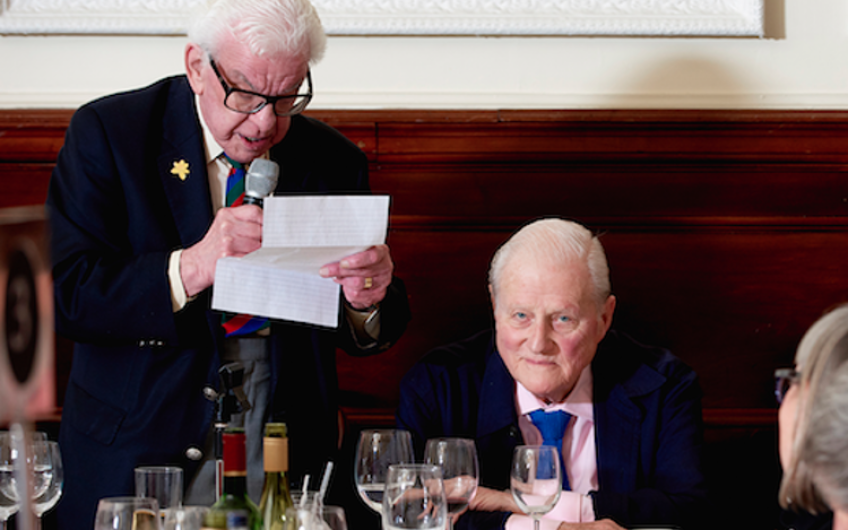 On November 14, the late John Julius Norwich’s 50th - and last - Christmas Cracker is published. Here he recalls his friend Patrick Leigh Fermor in his last article for the Oldie

The Athenian painter Nikos Ghika (1906-1994) provided me with my first breath of Greece in the summer of 1954, when we went to stay with him in his lovely old house on the island of Hydra.

Also staying there were Paddy and Joan Leigh Fermor. Ghika later designed the serpentine pebble mosaic floors at Kardamyli – the Leigh Fermors’ enchanting house in the Mani. It was Paddy that I knew best of the three. Our friendship lasted from the 1950s until his death in 2011 at the age of 96.

In the spring of 1955, when we were living in Yugoslavia – I was working at the British Embassy – a letter arrived from my mother. She had been offered a caique for a fortnight’s sail among the isles of Greece. Paddy and Joan Leigh Fermor were coming; could we come, too? At the end of August, we drove down from Belgrade to Athens, and boarded the Eros at Piraeus.

It was my first time in the Aegean, and my best. Paddy lived and breathed his beloved Greece – fluent in its language, encyclopaedic in his knowledge of its history, people and literature. And nobody has ever carried his learning more lightly.

As we sailed from island to island – and, in those days, there were almost no tourists, and I can’t describe what a difference that made – he talked about Greece, Greek beliefs and traditions, about Byron and the Greek War of Independence, about those monstrously magnificent Greek heroes – men such as Mavromichalis and Kolokotronis, whose names roll so satisfactorily across the tongue – and about the Greek Orthodox Church and its quarrels with the West over words such as ‘filioque’ and ‘homoousion’, his talk taking in all the mystery and magic of the Byzantine world. Twenty years later, I was to write a history of Byzantium myself; but I doubt whether, had it not been for that fortnight on the Eros, I should ever have done so.

One day we were in a taverna on Santorini. Britain and Greece were then at the height of the Cyprus dispute and Paddy was, of course, firmly on the Greek side. Suddenly a member of the party at the next table, hearing us speaking English and being slightly drunk, launched into a stream of anti-British invective. We pretended not to notice. Then, suddenly, he and his companions burst into song.

We leapt to our feet while he, naturally knowing all the words, sang them at the top of his voice. The mood of the other table changed immediately; and they were still more impressed when he continued with all the following verses – solo by now, since no one else knew them. Abject apologies followed: the ouzo went round once more, and we all departed friends.

It was characteristic of Paddy that, when he and Joan decided to build themselves a house in Greece, they chose the remotest corner: Kardamyli, at the far end of the Mani, the second of the three peninsulas that form the southern coast of the Peloponnese. And oh, how they loved it.

Paddy basically designed it himself. I remember him saying, while the building was in progress, ‘I want it to be part of outdoors, so that, if a chicken were found wandering through the library, no one would be a bit surprised.’

By November 1969, with its vast supply of bookcases, a huge desk and plenty of room to pace over a stone floor, the ‘powerhouse for prose’, as Paddy liked to call it, was ready at last. The two books describing his teenage walk across Europe, A Time of Gifts and Between the Woods and the Water, were both written there, together with hundreds of letters, articles and the jeux d’esprit which he so loved, and of which he was such a master. But those dread enemies procrastination and distraction were always hovering behind him, tempting him away. And as we shall see, they were to get him in the end.

Kardamyli was a huge success. It became the epicentre of Paddy’s world. For the first time, at 54, he had a home of his own. He continued to travel around Europe to see his innumerable friends, but it was here, I feel quite sure, that he was happiest. Outside Europe he was seldom tempted to roam. Except, surprisingly, for the Caribbean. A year or two after the war, he and Joan were persuaded by their old friend (and mine) Costa Achillopoulos to accompany him on a longish tour of the islands.

The result was Paddy’s first book, The Traveller’s Tree, which was published in 1950, and also his second, The Violins of Saint-Jacques, an exquisite little novella which was his only venture into fiction.

The islands fascinated him. His chapter on voodoo is a masterpiece. And then, when he got to Barbados, what did he find? A tablet in the churchyard of St John’s, carved with Doric columns and the cross of Constantine, reading: ‘Here lyeth ye body of Ferdinando Palaeologus, descended from ye Imperial lyne of ye last Christian Emperor of Greece. Churchwarden of this parish 1655-1656. Vestryman twentye years. Died Oct 3. 1679.’

Later, Paddy discovered that Ferdinando’s son Theodore had returned to England and had settled in Stepney, where he left a posthumous daughter baptised with the typically 17th-century name of Godscall Palaeologus.

She may have married, and had countless children; but, for the time being, this little girl in Stepney remains the last authentic descendant of the Palaeologi, the last imperial family of Byzantium.

Of course Paddy was a superb linguist; but I have never known anyone who enjoyed his languages so intensely. He loved on-the-spot translations: ‘To be or not to be’ in German, for example – occasionally recited backwards – or D’Ye Ken John Peel in Italian, which my daughter Artemis (his biographer) and I sang at his memorial service:

And then there were the letters –letters that could have been written by no one else. Reading them, written at such terrific speed that sometimes they grow faint because the fountain pen can’t deliver the ink fast enough, one marvels at Paddy’s facility and fluency. And yet, when he was writing a book for publication, every sentence was a battleground. When, in July 1988, Sotheby’s sold the autograph manuscript of A Time of Gifts, it was described in the catalogue as follows:

‘c.450 pages, the majority written on rectos only, some on both sides, the first chapter on lined foolscap sheets, some cartridge paper, others lined, heavily revised and corrected, revised passages frequently written on separate sheets and pasted or clipped over the original, corrections or elucidations often in red ink, foreign or difficult words printed in the margin, many sheets with encouraging notes to the typist, often stapled or stitched with coloured thread into gatherings, generally of ten pages.’

I have an idea – I hate to have to say it and desperately hope I’m wrong – that Paddy’s last years were not as happy as the rest of his life had been. He missed Joan desperately after she died in 2003, he was getting old and he gradually had to face up to the fact that he would never complete the third volume of the story of that glorious European journey in his early youth. He produced bits and pieces for it by the dozen, but something always prevented him from organising them, connecting them and making them into a single coherent document. It was, I suppose, a kind of writer’s block.

He would seize on anything – letters, articles, translations, those ingenious word games he so loved – rather than face one of two facts: the first, that he must finish the job; the second – far worse – that he couldn’t. Eventually he knew that the second was the truth. When he came to London, people would say breezily, ‘How’s Volume III coming on?’, little realising that they were driving a dagger through his heart.

Volume III is not entirely lost. The Broken Road, compiled by Colin Thubron and Artemis, breathes Paddy through and through. And anyway, he has left us so much more to revel in.

As a travel writer, he was surely in a class by himself. But he was much more than a travel writer; he was the most extraordinary literary – and social – phenomenon I have ever known, and I am proud to have been his friend.