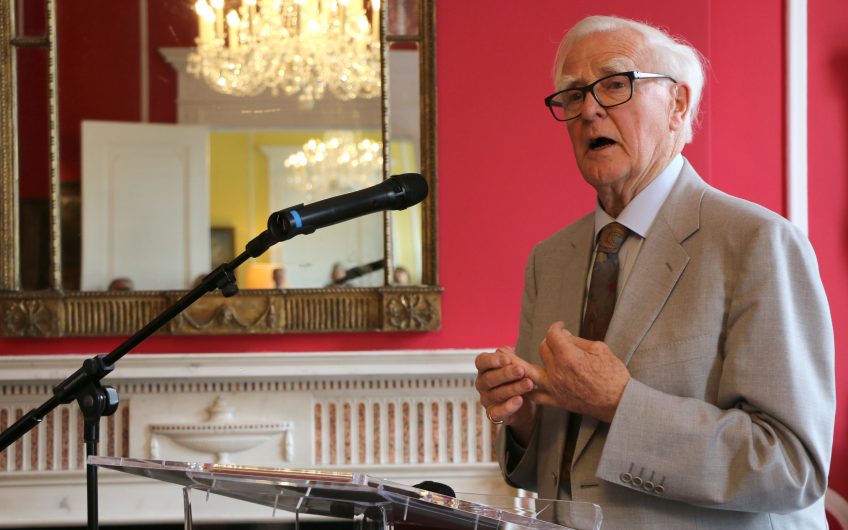 John le Carré's last novel, Silverview, comes out on October 14. Ferdinand Mount remembers him as a brilliant teacher at Eton

In my last year at school, we have a new German teacher.

The top German set is a notoriously tough bunch, and the previous incumbent retired hurt to go and teach in a girl’s school.

‘This one won’t stand any nonsense,’ my tutor prophesies.

At first sight, the new master looks quite innocuous, with a mop of corn-coloured hair and a soft, hesitant, slightly insinuating voice as though he means you to read between the lines of what he is saying. But from the beginning of the first lesson, he is in control, apparently without making the slightest effort to exert authority. He switches on charm or menace at will, and when the yobs at the back start to make trouble, he delivers merciless and exact parodies of their arrogant, languid voices.

For me, David Cornwell also has the marvellous freshness of the born teacher who is teaching his subject for the first time (he is barely 25). He takes me up partly because I am quite good at German but also, I think, because I look a bit down in the mouth. My mother died of cancer at the end of the summer holidays, and in typical English fashion everyone is avoiding the subject - and me - or that’s how it seems.

He invites me out to supper in his cottage at Dorney with his elfin-pretty wife Ann who illustrates children’s stories. She shows me some of her illustrations, which somehow seem to be rather like the cottage we are actually in, with their two little boys tumbling round the fireside and David (we are old enough now to call the masters by their Christian names) talking about anything that comes into his head. One of the things that I like about him is his irreverence towards the school and its encrusted traditions but at the same time his fascination with the place as though he was marking it all down for future use: ‘Really, only Upper Boys are allowed to walk on that side of the road? I heard that but could not believe it, and tell me, the business about who is allowed to wear the bottom button of his waistcoat undone – amazing!’ Then we talk about Goethe or Schiller, while Ann puts the children to bed, and I feel I am at home – something I have been sorely in need of lately.

His end-of-term reports sometimes have a sharp turn – ‘Ferdy must try to curb the Cyril Connolly tendency in him’ – but I do not resent this; it seems like a sign of intimacy, and in any case by now I am used to being ticked off for being a smartass. Looking back, I sometimes wonder why he was just about the only person who could get through to me in my frozen misery, when his own mother had disappeared from his life when he was five years old. But perhaps that was why.

As he warned us at the start, David does not stay long at Eton. In fact, he leaves only a term or two after I do. He is going to join the Foreign Office, but somehow word gets round that there is more to it. ‘Corns is going to be a spy.’ Waste of a good teacher, I think. He adopts the pen name of John le Carré for his first book, a thriller set in a public school, one or two of the characters being immediately recognisable, notably Grizel Hartley, the ebullient Brunnhilde married to a famous ex-housemaster.

He comes back into my life after his tremendous success with The Spy Who Came in from the Cold when he is living near Wells, only a few miles from the Somerset house of my uncle Tony Powell [author of A Dance to the Music of Time], and he and Ann come over to dinner. My Aunt Violet has also invited my mother’s old friend Mary Mayall and her husband Lees, who currently occupies the pompous post of Vice-Marshal of the Diplomatic Corps, though a more bonhomous, less stuffy soul it would be hard to imagine. By now, Kim Philby has defected in the footsteps of Burgess and Maclean, and the hunt is on for the Fourth and Fifth Men.

‘Did you ever know Philby?’ David asks.

‘Oh yes, I used to meet him with Malcolm Muggeridge, at the Gargoyle before the war,’ my uncle replies.

‘Quite an amusing fellow but obviously a complete crook.’

‘And Burgess and Maclean, did you know them at all?’

‘Burgess was the most ghastly type of BBC pansy, quite insufferable. Not as bad as Maclean though.’

‘My mother went skiing with Maclean,’ I volunteer.

Then Lees Mayall pipes up: ‘Donald Maclean was my boss in Cairo. He broke my leg when he was drunk. We remained great friends until he went off.’

‘It was your leg, was it?’ David is enthralled. In fact, as Lees and Mary continue to describe what a struggle they had in Cairo to cover up for Donald, an unholy glee comes over him, which even such a master of concealment is unable to suppress entirely. Here he is at the very core of the Establishment, and it is turning out to be every bit as rotten as he always said it was.

Not long after that memorable evening, David remarries and, by coincidence, comes to live with his new wife Jane in Cloudesley Road, two hundred yards from us in Islington. We ask him to our children’s parties, and he exercises his gentle charm on our children just as he had on me, and I begin to understand what a magician he is in life and not just on the page.

Then they move to Cornwall and inevitably we don’t see so much of them. But much later, he comes back into my life one more time when my daughter Mary becomes his editor at Penguin.

From what she tells me, he hasn’t really changed much in fifty years: he is the most demanding author you can imagine, yet also the most charming, the most sympathetic, the least patronising. Trailing along in Mary’s wake, I listen to David talking at literary festivals and prize-givings. Physically too, he has changed so little in all that time: the same bushy eyebrows and shy smile, dressed always in gingery brown corduroy or velvet, as though imitating some elusive woodland creature.

As I gaze round the eager audience and listen to their thirsting questions, I realise that for them David has become rather more than the author of the most beguiling and devious spy novels ever written. He has become a moral force whom they look to for guidance in an amoral world. The son of the biggest liar you ever met has become the man you most trust to tell the truth. ‘Lucky to have known him?’ Lucky in spades.