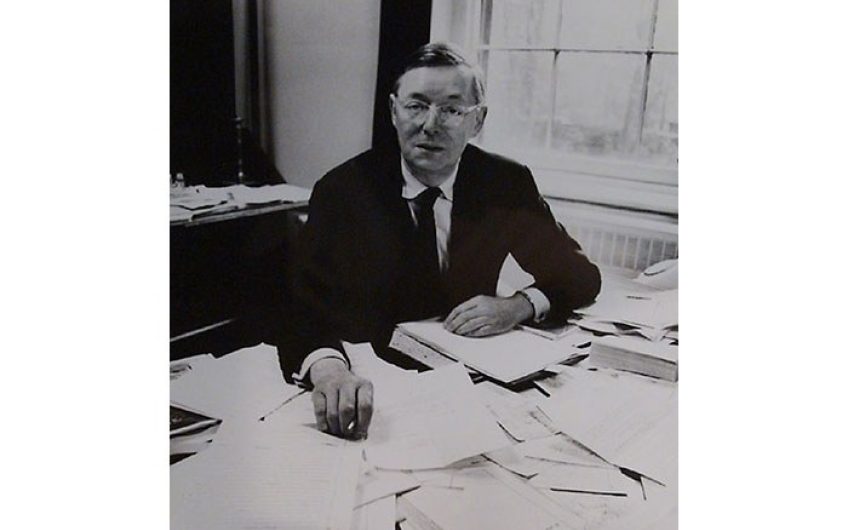 In my new novel, The Disciple, about a young American who contrives to meet a British art historian, there is one very true-to-life figure.

The art historian in the book, Sir Christopher Noble-Nolan, bears many similarities to the scholar of Italian Renaissance art Sir John Pope-Hennessy. I was professionally and romantically attached to him from 1982 till his death in 1994, at the age of 80.

I first saw the scholar with whom I had long been obsessed, and whose many books I had devoured, at a lecture – on Masaccio, in New York, in January 1982.

I immediately wrote to the object of my fascination to tell him how transported I had been by his delivery. I found his appearance and demeanour positively regal and the magisterial timbre of his voice all but intoxicating.

I quoted back to him his own words: ‘Art history is a vocation, not a profession in the conventional sense.’

My letter elicited a terse postcard, inviting me to lunch when I was next in New York. John Pope-Hennessy was then Consultative Chairman of the Department of European Paintings at the Metropolitan Museum of Art, a post he had assumed in 1977, when he resigned the directorship of the British Museum. I was in my last year at Haverford College, outside Philadelphia.

I waited for what seemed a decent interval – so as not to appear too eager. In March, he invited me to lunch in his art-filled apartment in Park Avenue.

A month later, he invited me to dine, again at his apartment, where I wound up spending the weekend and going with him, that Sunday, to have our palms blessed at the Church of Saint Ignatius Loyola. A week later, he wrote to me, asking me to be his research assistant and proposing that I come to Florence with him for that summer of 1982.

I was 21 when we first met; he was 68. The divergence in age did not seem – with the intrepidness of youth – in the least odd to me. I did not consider myself a gerontophile, per se. I felt my attachment to John Pope-Hennessy to be foreordained and was prepared to do anything to establish myself as his beloved ‘disciple’.

As to our relationship, he rarely employed the word ‘homosexual’; ‘gay’ never; ‘boyfriend’ was beyond the pale – and ‘husband’ was, in those days, simply UNimaginable.

But, far from feeling ashamed of his sexual identity, John Pope-Hennessy seemed to view it as a mark of special distinction, accorded to but the happy few. One just never spoke about it.

His mother, the redoubtable Dame Una Pope-Hennessy – perhaps, the only person he ever truly loved – actually wanted both her sons, John and his younger brother, James (the biographer of Queen Mary), to be homosexual. And get her wish she did!

She thought the celibate state infinitely conducive to a writer’s life, and there was no question of either of her sons not being a writer. Such reasoning was as anathema to the middle, middle-class, unintellectual, Irish Catholic milieu in which I had been raised in Philadelphia as it was revelatory to me.

Still, I lived in constant fear of not measuring up to John Pope-Hennessy’s exigent intellectual standards. His profound knowledge of music, history, literature and, of course, works of art seemed, to my young self, encyclopaedic.

I felt under a constant strain. Did I know the Köchel numbers by heart? Had I memorised the Berenson lists? ‘And is it not extraordinary that Für Elise should not have an opus number?’ he asked me, as we waited for a bus to take us to the German Institute.

‘Quite,’ I timidly replied.

Perhaps surprisingly, he adored thrillers – ‘the trashier the better’ – and could spend hours watching the tennis on the television – ‘all that undiluted competition!’

He also had an alarming habit of abruptly changing the subject of conversation in a challenging fashion. ‘Do you like Bambaia?’ he suddenly asked me the first time we dined together in a restaurant – immediately after he had been discoursing, for quite some time, on Arnold Schoenberg’s dodecaphony.

I looked down at the menu, thinking Bambaia might be some recherché, north-Italian cheese of which I had never heard, only to realise, later in the evening, that he had been referring to an early-16th-century sculptor from Milan – which he pronounced ‘Mill-en’.

He haughtily dismissed any subject in which he was not interested: abstract philosophical ideas, civil rights or the cinema. ‘I do not,’ he often pronounced, ‘like pictures that move!’

His eye, which he consciously trained from the time he was a young schoolboy at Downside – in the way a singer trains his voice – was legendary. ‘When a document contradicts my eye,’ he was fond of saying, ‘I simply assume that the document is at fault.’

He took me back to Florence each summer for the following four years (1983-1986), while the interminable months of September to May were spent in New York, where I was infinitely less happy.

Graduate school, at the Institute of Fine Arts, bored me. AIDS rampaged all around. I saw John Pope-Hennessy only officially, at the Metropolitan, where I had a small desk at the end of a dank aisle. Technically, I was employed, part-time, as his research assistant. Practically, I was at his beck and call, day and night – and, socially, at the weekends. During the week, he went out to dine every night with millionaire (preferably billionaire) collectors.

Happily for me, he retired from the Metropolitan in 1986 and asked me to move with him to Florence into a large apartment, with breathtaking views, in Palazzo Canigiani near the Bardini Gardens.

He would often accompany me on my afternoon forays – mornings were always devoted to writing, on a pink Olivetti manual typewriter. He would point out some unusual or little-noticed work of art. The young Verrocchio’s polychromed marble tomb-marker of Cosimo ‘il Vecchio’, at the foot of the chancel of San Lorenzo, looked, he said, ‘like a Frank Stella avant la lettre’.

He took me to see Palazzo Pandolfini in Via San Gallo, the only example of Raphael’s architecture in Tuscany. He observed that the pages of the bible in the Virgin’s hand, in Leonardo’s Annunciation in the Uffizi, looked as if they were made of silk.

He arranged for us to visit the mile-long Vasari Corridor, home to the greatest collection of self-portraits (from Andrea del Sarto to Chagall) in the world. He even managed for us to gain access to the Chiostro Grande of Santa Maria Novella – not an easy feat, as it is now a private police academy – to see the haunting fresco of The Veil of Saint Veronica by Pontormo (pictured).

‘I wonder,’ he asked, ‘if Shelley had this work of art in mind when he wrote the sonnet Lift Not the Painted Veil?’

Wisely, I refrained from replying.

We attended a Latin Mass, celebrated according to the Tridentine rite, every Sunday and every holy day in a small, poetically decrepit chapel in Piazza Santissima Annunziata. He was humble – not an adjective often associated with him – when it came to his faith.

He was happy to leave the mystery of the eternal verities to more abstract minds and to concentrate himself on ritual. He wrote that he ‘could believe in anything that happened in a predella panel’, and that he ‘would not be in the least surprised to see a saint come crashing through the ceiling of my drawing room’.

His Roman Catholic observance in no way compromised his unremittingly homosexual identification.

‘Those rules,’ he would pronounce with a dismissive flick of the wrist, ‘do not apply to one.’

John Pope-Hennessy could be generous, thoughtful and, at times, riotously funny. He could also be wildly impatient, woundingly contumelious and supremely egoistical: nothing, but nothing, was to get in the way of his work.

I suppose that I was always a little afraid of him. Ductile by nature, I longed to please him.

I was often frustrated by John Pope-Hennessy’s intransigence, overwhelmed by his demands and devastated by his seemingly unlimited emotional self-sufficiency. But I never ceased – which I hope shows in my fictional portrait – to love him.