King of the clocks - Christopher Hope 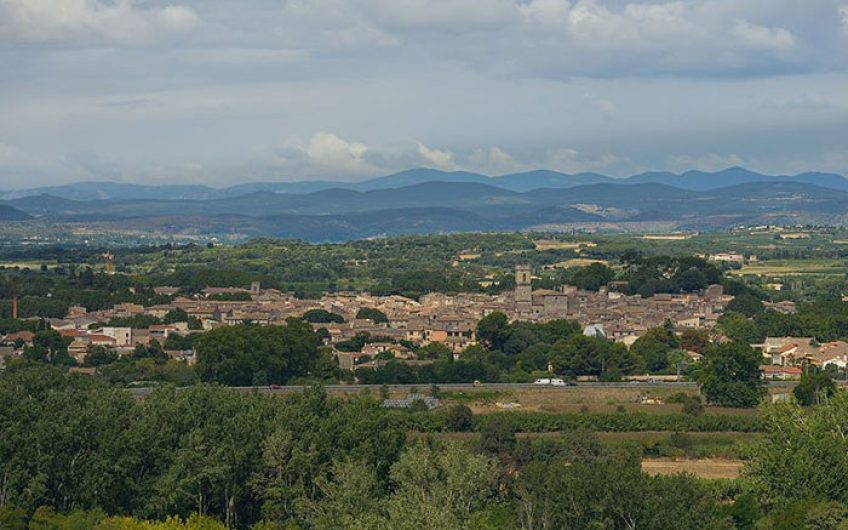 General view of Pézenas and the A75 autoroute from the Southeast in the commune of Castelnau-de-Guers, Hérault, France.
View Full Size
1
of 1

In an atmosphere of frugality interspersed with fusillades of Gallic cheer, Christopher Hope endures a long, cold winter in the Languedoc

In this little village in the Languedoc, only my landlord admits to enjoying the bitter cold. He keeps a fond eye on all the elderly whom he refers to happily as ‘old leather’. The wind off the snow bites to the bone. This is the South of France, after all, where, despite rumours to the contrary, it gets very cold. The snow catches the young dwarf oaks unawares. They lift their arms in a kind of angry expostulation. They look as if they have been frozen in mid-sentence, absolutely furious. Pine trees by the river have cracked and fallen. The snow has come down on the olives like a wolf on the fold. The vineyards have vanished.

The village sits right at the foot of the Black Mountains. From the mountains comes the wind, bringing clear weather and falling temperatures. As a tribute to its dubious transforming powers it is called the Circe. When the Circe slackens then counter-winds blow from the sea, from the distant Corbières, across the coastal plain. This is the Marin, a bad wind, bringing flu, fatigue and crimes of passion.

Like the trees, we also are unprepared for the suddenness of the winter snows. We’re not dressed for it. But then we don’t dress particularly well here. The absence of chic is profound. You see a lot of tracksuits, and when the snow falls you wind your scarf around your beret. When the snow thickens, elderly skiing outfits begin to appear. The ladies queueing for Tac-o-Tac coupons in the cafe show up in antique cream moonboots which I think they lend to each other, moving across the mushy street with unstoppable faith in the big win. ‘Smile,’ advises the sign above the mirror, ‘you may be looking at a millionaire.’ Of course, nobody smiles. Parting with money is a serious business, and we do not believe the promises of Parisian copywriters.

This is a village of three divisions (four if you count the Dutch, but they are only here in the summer). The children are away at school in town. The young people work in Carcassonne or Narbonne, or in the farms and in the vineyards. Much of the place is left to the elderly, the survivors of the third division. In most weathers the old men play pétanque. They have worked out little ruses to compensate for failing frames. You do not bend to recover your boule. Instead you haul from your pocket a length of string, from which dangles a magnet, and go fishing for it.

When the sun shines there are benches for basking. But when the snow blankets the cherry trees the village becomes a ghost of itself. An inner core of favoured clients queue for hot loaves in the only bakery that is still working. The owner knows who qualifies as a ‘client’, but her means of detection are mysterious. She has the sort of nose for who is, and who is not one of ‘us’ - the kind of nose that once characterised the Inquisitor in Carcassonne. For he sniffed out the heretical Cathars in the little mountain villages scattered throughout the Languedoc with patient cruelty.

Those who did not belong to the Catholic chosen went to the stake or were made to wear the yellow cross, as a sign of their infection by the Albigensian heresy.

In winter the shutters in the village close earlier each day. Neighbours begin wishing each other ‘good evening’ at three in the afternoon. My landlord believes the early closing of the shutters to be a relic of the Revolution. That seems unlikely. This little village is over a 1,000 years old and it stands in a country which endured, in the destruction of the Cathars in the 14th century, a genocide as cruel and resolute as anything the Nazis accomplished. By the time the persecution of the Cathars was over, not a single heretic remained. Why should people with such experience behind them take exceptional fright at the terrors of the Revolution?

I suspect the early closing of the shutters has more to do with French frugality and fears of hypothermia. Winter takes its toll. Up the road the mausoleums wait in the cemetery. ‘Apply to the Mayor’s Office,’ instruct the discreet advertisements on sites, available, it is promised, ‘in perpetuity’. A promise undermined by the mayoral ‘For Sale’ sign on the second-hand graves, now suitable for immediate possession.

‘Caravan parks for cold people,’ my landlord tails the village graveyards. He likes to masquerade as a Dutchman, falling in easily with the Dutch immigrants who have bought summer houses in the village. These Dutch colonists, says Frédérique, the solitary waiter in the village hotel, came over in ‘two waves’. When Frédérique speaks of the Dutch settlers he makes them sound like the Vikings. According to the Chronicle of Frédérique, the first wave of Dutch came ‘to die’; the second ‘to settle’.

In fact my landlord is not a Dutchman at all. He is an ethnic German from the Russian city of Kalingrad, formerly the German outpost of Königsberg. That city should be remembered best as the home of Immanuel Kant. The great philosopher took a daily walk at a time so precise his neighbours set their clocks by it. My landlord is in love with clocks. He is known for miles around as Le roi du Tic Tac, the King of the clocks. His house is crammed with them: tall, full-faced giants, squat pink dwarfs, spinning wheels and pendulums like pine cones. He is the most relentlessly cheerful man I’ve met. His response to all vicissitudes is a fusillade of good cheer, a ruthless bonhomie. He is that rare exhausting creature, the lucky man.

His other love is billiards. He owns a small table and plays nightly, luring his victims with glasses of chestnut brandy which he buys at knock-down prices from the cellars of those who have taken up the mayor’s offer in the cold caravan park. His billiard room is a large, icy garage. Lining the walls are towering grandfather clocks of every age and provenance. Each clock wears a black hat. There are toppers, bowlers, trilbies, often at jaunty angles. The clocks give lively impressions of vanished professions: there are old- fashioned city bankers, retired guards’ officers, bookies, and Victorian funeral mutes - all white-faced onlookers at the billiard matches my landlord always wins. ‘I don’t wind them, or they would all chime at different times,’ he says, with a glance of amused scorn towards his captive audience. And in his glance you catch the ruthless affection of the pasha for his eunuchs.

My landlord, a fierce sceptic, is unimpressed when he learns I am joining the annual coach trip to Lourdes. He offers me his car. Perhaps I will pray at the shrine to have his balding tyres miraculously restored? But I prefer the coach. The village faithful gather outside the grocer at five on a black and gusting morning. The Circe is seeing us off. It is a four-hour trip to the grotto. We return near midnight refreshed in spirit clutching our plastic bottles full of Lourdes water. Everyone sings Lily of Laguna and the grocer entertains us with risque observations on the uses of the ficelle, that slender wand of bread, which he waves excitedly.

Lunch in Lourdes is certainly better than anything we are accustomed to. There is something very comforting about a French village where the cuisine is pretty indifferent. Cassoulet is regarded as the great thing here. And tripe. Neither allows for the usual gastronomical gush. The bread is unremarkable. The wine is splendidly unreliable; though dressed up in fine abbey livery or in painted bottles in which energetic satyrs fondle compliant nymphs, it is often better left in the bottle. But the ordinary stuff from the Co-op casks is drinkable and customers bring battered bottles and giant jerry-cans for their refills from the plastic petrol pump.

Some, like the Colonel’s Lady, stick to beer. The Colonel’s Lady endured her husband’s beatings for years. When the old soldier died, she took to dividing her days between the two village bars. She never speaks. A slight movement of the wrist indicates that she is ready for another beer. From the cafe to the bar and back again. So the day passes until, with the same dignity, she weaves her way home to bed. This is her long, sweet revenge on her brutal husband. She is drinking his money away to the widespread sympathy and evident satisfaction of the village.

More public information is passed on by loudspeaker at very high volume as a courtesy to those who are hard of hearing. Loudspeakers flower in menacing clusters among the rooftops. A few bars of ear- splitting pop seize the attention. Then the broadcasters hidden in the Mairie decide to take up their daily chant: ‘Alio! Alio!’ - the electronic town-criers with the big decibels. Fetes, bingo, power cuts, arrival times of the travelling horse butcher from Olonzac, all these items are included. There is no escape.

Death demands a change of tone. A snatch of Chopin’s Funeral March and the secret broadcasters must strive for a decently sepulchral note. But there is only so much you can do with ‘Allo! Allo!’. Windows open to catch the name and we learn that Monsieur M died at two in the morning. The café drinkers look up from their pastis. The windows close, the King of the clocks shows a quickening interest. You can always rely on old leather. Another for the caravan park. Another cellar for sale.

Joe Biden - the first President with a stammer. By Nigel Phillips

The USA at the weekend