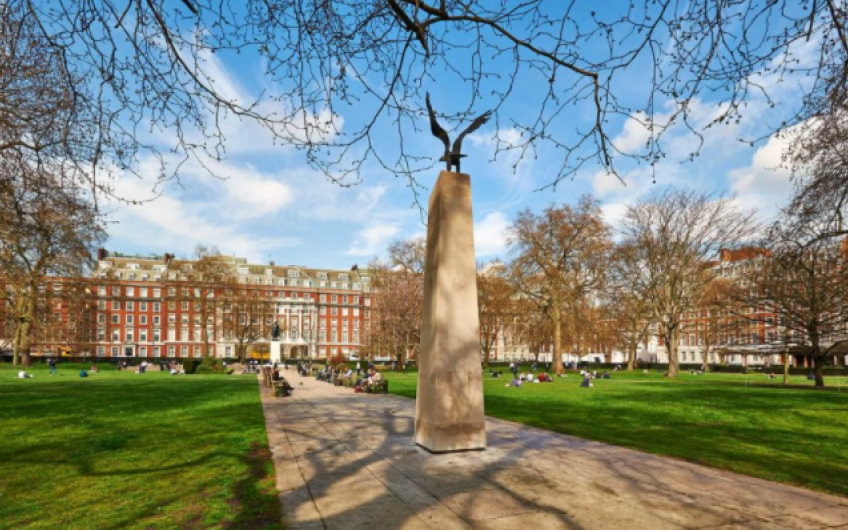 When the US embassy in London eventually vacates its exceptionally brutal, Brutalist home on Grosvenor Square for the blast-proof moated cube nearing completion at Nine Elms, south of the river, few traces will remain of an American presence in that corner of Mayfair.

The first American embassy set up there in the 1930s, but a diplomatic presence reaches much further back, to the 1780s - when John Adams, second POTUS, opened the first mission to Britain in his rented home at the corner of adjacent Duke Street and Brook Street. The house, against the odds, still stands.

The area was dubbed Little America for the density and sheer goddam self-important buzziness of the swarms of Stateside diplomats, spooks, secretaries and soldiers, hovering around Eero Saarinen’s 1960 concrete hive.

All that fuss began to recede soon after the fall of the Berlin Wall, and Grosvenor Square will soon return to - if not quite the peace of the oaken glade it was until the early 1700s - then to a more docile incarnation.

The building will remain. Well, at least its external appearance will. Since 2009, it has been protected not only by anti-car bomb barriers and, at times, a Somme’s-worth of defensive metalwork, but also by that most fearsome of paper deterrents, an English Heritage listing. Grade II, since you ask.

In the gardens of the square itself, an eclectic group of memorials and statues will be left behind long after the ambassadorial mothership which spawned them has blasted off. Each one is a mute witness to an extraordinary era so recently past, so swiftly archaic.

One is a memorial to President Roosevelt, a statue of the ailing wartime leader in bronze – his cape and stick echoing, strangely, the favourite evening attire of one of Grosvenor Square’s slightly less diplomatically-inclined residents, Oscar Wilde. FDR’s widow unveiled the statue in 1948, by when the Second World War had already chilled into the permafrost of Cold War.

Another token of loss and suffering in the square is the September 11 Memorial Garden, dedicated to the victims of that attack, of whom 67 were British, and opened in 2003.

The third monument is very hard to find; it might well have been removed. It is an inscribed stone marking the 50th anniversary of the D-Day landings, unveiled by the then prime minister, John Major, in April 1994. Its precise location, as was the case with that of the landings themselves until dawn on that fateful day, is keeping us guessing.

A bronze of Ronald Reagan, the 40th President - a leader, whose war service was anything but front-line, yet who was credited with winning the far longer stand-off with the Soviet Union - was unveiled on 4th July 2011, a century and a few weeks after his birth.

Which leaves us with the fourth memorial – the most intriguing of all.

The Eagle Squadrons memorial is a plain stone obelisk, small enough to miss, topped by a bronze eagle, wings outstretched, sculpted by Dame Elisabeth Frink and unveiled in 1985. The stone is inscribed with the names of 244 American and 16 British fighter pilots who volunteered to fly with the RAF against Nazi Germany, long before Pearl Harbor dragged the United States into that conflict.

Profoundly isolationist, and with anti-British sentiment boiling over into outright hostility in Congress, pre-Pearl Harbor United States nevertheless proved to be a rich, deep pool of talented, highly motivated pilots for the RAF.

For two years from late 1939, more than 6,000 Americans applied for places on selection and training programmes to fight Hitler with the RAF, a scheme run mainly in Canada – even though it was illegal for a US citizen to serve in another nation’s armed forces. Penalties included the loss of American citizenship. From these, a few hundred made it into European skies.

The recruitment programme was a PR gift for isolated Britain - which, since late 1939, had been fighting an intense, wide-ranging, all-out battle within the United States to help nudge public opinion towards armed intervention against Germany. The scheme played very well in Blighty, where cinema newsreels showing college boys from New York, Wyoming and Utah donning RAF uniforms fanned the flames of resistance.

This was, remember, during that long, bleak hiatus when the Russians were official collaborators, in diplomacy and tanks, with the beast of Berlin.

Soon, three ‘Eagle Squadrons’ were serving with the RAF, composed almost entirely of Americans flying Spitfires and Hurricanes. The first, 71 Squadron, took to the skies during the later phase of the Battle of Britain. By the time the United States entered the war, some 80 Eagle Squadron pilots had been killed in action, most of them over northern France and the Channel. As America’s war effort took off, the RAF’s surviving Eagle pilots were quietly absorbed into the rapidly expanding US Army Air Forces – and the whole curious episode of the Yanks in blue was all but forgotten.

What remains of the RAF’s Eagle Squadrons is the small, quiet, easily overlooked memorial in Grosvenor Square, and a handful of history books. And no mention in the vast array of Second World War histories. Why such amnesia?

Memorials do not, on the whole, celebrate the sacrifice of adventuring idealists and dreamers - especially those who, no matter how briefly, bravely and with what justification, broke some of the salient rules of statehood in the name of a greater good.

In the international conflict that preceded the Second World War, the civil war in Spain, more than 3,000 Americans volunteered to fight against Franco. Some 700 of them died doing just that. As with the Eagle Squadron obelisk, noticing their memorial is a matter of chance. Dedicated in 2008, it is tucked away in a quiet corner of sleepy San Francisco. It does not, it is fair to say, figure on the tourist trail.

The outgoing US Embassy has been bought by a Qatari investment firm owned by its royal family, and is being transformed into a luxury hotel. Ironies teem like frogspawn in a spring pond. Qatar is now subject to embargo, on the grounds that the tiny state is a sponsor of terrorism. Sanctions have been imposed with the full backing of Washington.

Meanwhile, builders who have been carrying out internal renovation work, removing walls and suchlike, have been expecting to find Soviet-era listening devices, built into the very fabric of the hive when it was going up, all those years ago. None have come to light. But they would say that, wouldn’t they?

As has so wisely been pointed out, ‘The past is never dead. It’s not even past.’