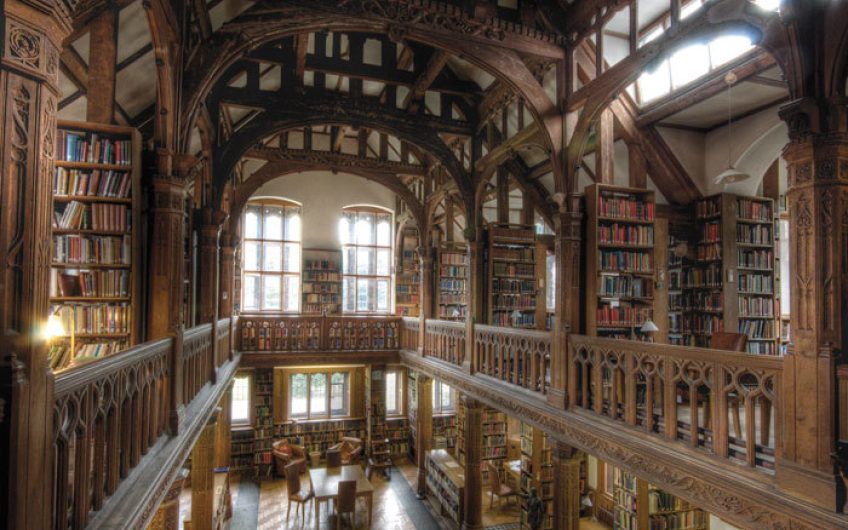 In 1894 William Ewart Gladstone, nearing the end of his days, pushed a book-filled wheelbarrow from his castle home to a corrugated hut a mile away. The ‘Tin Tabernacle’ became home to his 32,000 books, a monument to his belief in the pursuit of truth through study and contemplation, and desire to share what he called ‘the vital spark’ of ideas ‘altogether new’. On his death, the hut was replaced by a building in the Neo-Gothic style, the library itself something between a vaulted Tudor barn and a cathedral nave. The UK’s sole residential library, it now has 250,000 books, from gilt-edged tomes annotated by Gladstone himself to Chuck Palahniuk hardbacks malevolently glistening in the light of the coal fire.

I arrived on the second day of the year, still a little stunned to have been awarded a month as writer-in-residence, and was shown to a room so neatly white and so elegantly lacking a TV I felt I’d taken holy orders. Then I found the darkest corner I could, stuck my nose in a cleft of books, and got hopped-up on that unmistakable scent of dust and vanilla.

At night I took my spot in the gallery where lamp-lit desks nestle between banks of books, discovering – everyone does! – that some benevolent spirit lurking in the shelves makes one Gladstone afternoon worth a week elsewhere.

‘Thing is,’ said a lady in an embroidered jacket which bespoke a lifetime in Arts and Humanities, ‘here there’s no danger of conversation about football, or house prices.’ I nodded, bold as brass, as if I hadn’t just been fulminating on the subject of London rent.

But she was right: there was the retired librarian, with his pastel sweaters and mistrust of broccoli (we survived two world wars without it), painstakingly transcribing a diary kept by the daughter of the British Museum’s first curator. There was the poet-theologian, with his Tolkien hair, Ugg boots, pipe and weskit, who so enlarged my mind I quite forgot the fish pie and for a moment believed I understood the co-inherency of the Trinity. Lillian, with her grey mane and shy smile, spent a fortnight researching medieval fountains – the last time I saw her she dozed in a nest of books, dreaming (I hope) of sunlit courtyards elsewhere. There was also the fellow whose digestive system was evidently unequal to the fish pie, since he belched constantly and without apology into the silence. I texted my husband: I WILL KILL HIM! – but he left for Vienna before I could pitch him headfirst into the eschatology section.

I soon discovered that a rather drab woman sitting by the fireside was invisible. I eavesdropped as a handful of clergy bustled in: oh yes, Tamara was most able, most able: definitely episcopal material, once that tiresome hurdle is removed; and how was the new parish, and was there a Waitrose in Fishguard?

A gentle spirituality pulses away from morning Eucharist to the evening G&T. Used to the mockery of London friends, it felt wonderfully transgressive to admit to a naval chaplain (six-foot-six in his socks, with WATCH GAME OF THRONES written on his left hand) that I was in a spot of bother on the faith front. ‘Splendid news!’ he roared, and went into an analogy about ceremonial swords that cheered me up no end.

I emerged dazed and blinking with one novel completed and another begun, and a headful of Victorian rectors, Essex legends, early amputation techniques, Latin grammar, Mother Julian, and the mystery of the cook’s world-class bread-and-butter pudding.