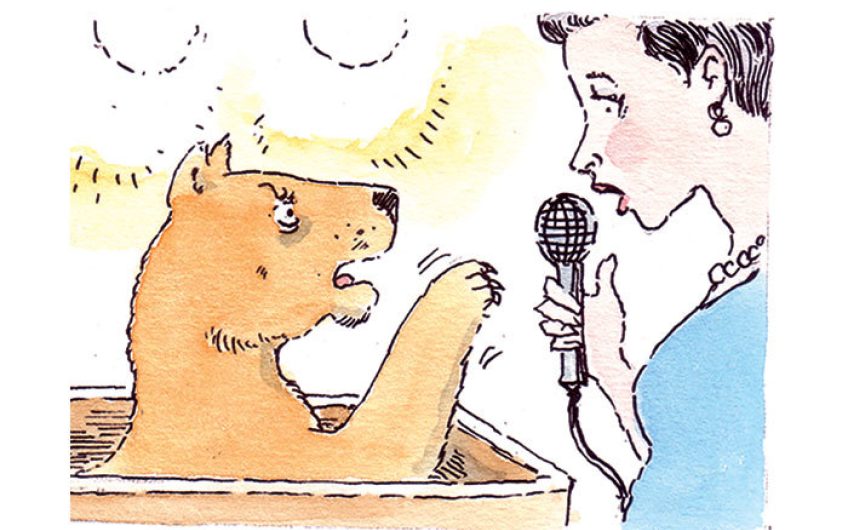 In the early 1950s Lime Grove Television Studios were positively hand-cranked compared with the space ships that are the ‘creative hubs’ of today. It was a relaxed, casual sort of place to work, except I do remember the mysterious importance of RACKS – or were they WRACKS? These were the boffins who appeared to live in the basement – I saw them as troll-like chaps – who seemed easily upset by certain patterns of garment which sent the picture into wild dazzles (the worst offender was the ‘Prince of Wales check’). I faced reprimand over one dress and was told ominously ‘RACKS won’t like that’, as though I had offended the gods of the underworld.

Then there was my hair – in those days dark, and considered too harsh for the black and white cameras. So I was sent, at BBC expense, to the famous Steiner hairdressing salon in Mayfair where I was imprisoned for several hours while they put ‘highlights’ in my locks to turn them stripey white, like a zebra.

I had devised a programme called Signs of the Zodiac – nothing to do with astrology, more a sort of magazine confection examining the various traditions associated with the different zodiac signs – the animal of the month, the birthstone etc. A fairly tame idea – until I got to Leo the Lion.

A small lion cub was ordered. It arrived in a simple wooden box together with a keeper. We had a short rehearsal. General chat about lions and their ways, and then the box was opened. Naturally, little Leo didn’t like the hot lights and the hours of incarceration. His paw swiped towards me and I became rather little-girly and stepped back to avoid damage. The producer, a very steely young man, bawled at me from the director’s ‘box’ (everyone could hear – no secret earpieces then): ‘DON’T BE SUCH A COWARD, VERRALL.’ I’d never been called a coward before and it made me pull myself together and even stroke the savage beast. The live transmission went ahead without a hitch.

The ‘colour of the month’ had to be illustrated on each programme. When it came to white, I wanted an original take on the subject, and so British Oxygen came to demonstrate the properties of frozen oxygen. Their party trick was to drop objects into flasks of frozen oxygen housed in huge canisters which emitted elegant white ice-cold steam. A rubber ball was dropped in and it shattered. Then a daffodil. Fascinated, I spent some time peering into the huge flasks doing my presenter’s banter, when I suddenly realised that inhaling the gas had made me rather floaty and not entirely with-it. I felt like Mary Poppins in the laughing-gas scene. Again, I managed to pull myself from the brink and in a sort of miasma I finished the piece.

Apart from the lion and the intoxicating white steam it was, by today’s standards, probably a rather boring series – but I enjoyed the research and the people, and look back with affection on those simple days.