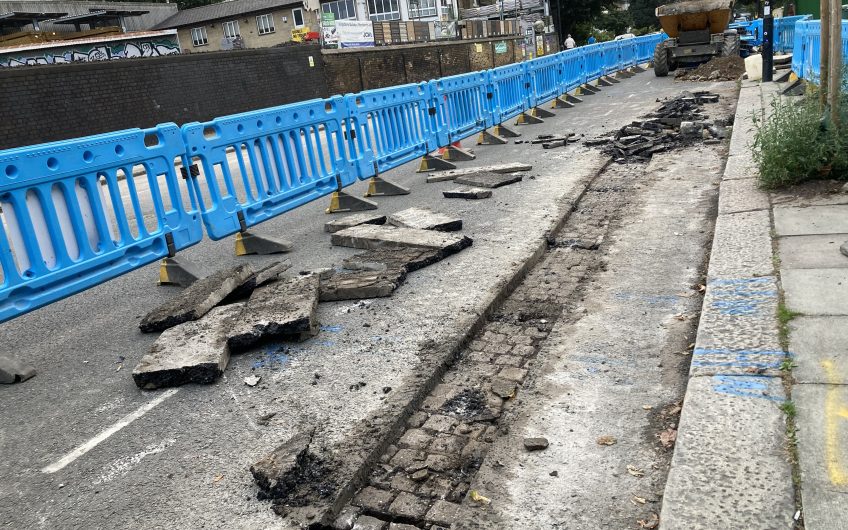 The row of granite setts, exposed in Caversham Road, London. To the right are the pitted, granite kerbstones
View Full Size
1
of 1

Who knew road works could be so exciting?

They're laying broadband in my Kentish Town street – and exposing the Victorian granite setts beneath. You can see them in this picture, laid out in a long row beneath the ripped-open tarmac. Setts are little, jewellery-box-sized cubes of granite, placed together in a grid, like flat cobblestones. A few original wooden cobbles - like those in Endell St, Covent Garden - still survive in England, often near hospitals and in rich areas, where silence was at a premium.

On the right-hand side you can see the lovely kerbstones - also Victorian - made of super-hard granite, to put up with 150 years of carts, horses, people, cars and lorries bumping into them. Look closely and you'll see the kerbstones have been pitted - to stop people slipping on them. What Victorian thoughtfulness!

Pavements and kerbstones have a longer shelf life than the roads they flank. Yorkstone, originally quarried in Yorkshire, but also quarried elsewhere, is the classic paving stone. The tight-grained sandstone - rich in iron oxides, feldspar, clay, mica and quartz - weathers so gracefully that it's often ripped off streets by opportunist cowboys.

There are other varieties of paving stone, too: in Shropshire, they used Dhustone, a basalt from the Clee Hills. Kerbstones still tend to be made of granite, as they have been since the early 19th century. The granite of Mountsorrel, Leicestershire, was first quarried for road stone in the late 1820s, when a group of Scotsmen from the granite city of Aberdeen, came south to dig it out. Pink granite setts from Leicestershire were used to pave roads all over England.

The M1 was largely built on crushed Mountsorrel stone; so much so that a whole hill in Markfield, Leicestershire, once topped by a windmill, was quarried into oblivion for road-building.