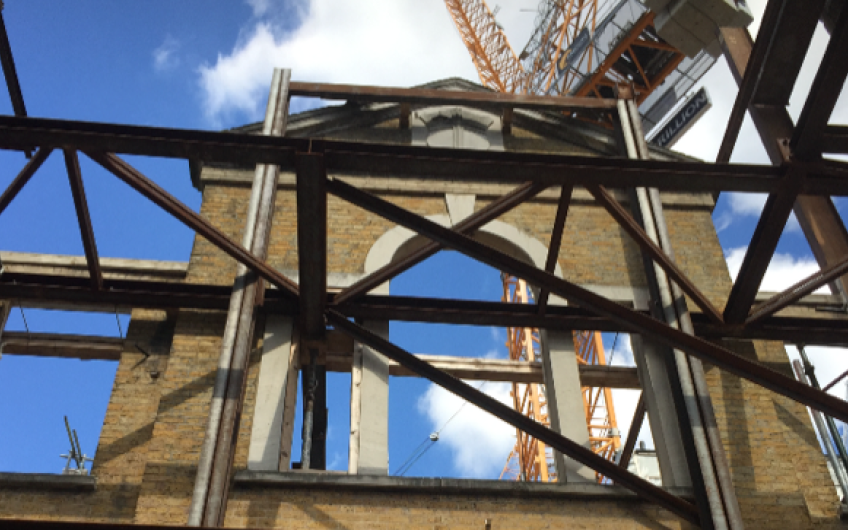 Slowly and surely, London has become a film-set Wild West town – apparently solid until you take a peep behind the frontages and see the wooden props and scaffolding sustaining the whole illusion.

Years of unprecedented speculative redevelopment has left the capital more denuded of architectural and historical depth and integrity that at any time since the Luftwaffe's last day-trip – a fantasy-land of ‘saved’ Georgian, Victorian and Edwardian façades pimping themselves as the real thing but no more than a veneer which hides the charmless expanse of milking-shed engineering erupting behind.

It's everywhere. Take a long stroll from, say, Regent's Park down to Mayfair, cutting through Fitzrovia then across to Westminster, sweeping back around through Holborn, then on east through Shoreditch, Hoxton and Dalston and north to King’s Cross and Islington. Architectural body-snatching on scale never seen in peacetime in any major Western city. These are facelifts in reverse, where the building’s familiar frontage is left alone while high-viz workforce swiftly render the body of the building – its worn rooms, familiar entrances, creaking stairwells, sticking windows, haunted corridors, the soul of a place that has lived and survived – to a void.

The systematic evisceration of historic buildings gives the lie to Britain's supposed love affair with its built past. As with kindness to animals and an innate sense of fair play, convincing evidence of a commonly-held national nostalgie for our venerable buildings and streetscapes is becoming thin on the ground.

So what that many of these 19th and 20th century buildings, which still make up the bulk of inner London, have failed to house a blue-plaque worthy or two, or host a significant event, or possess little deemed of exceptional architectural merit – and thus haven’t qualified for special protection. Their importance lies elsewhere. They were workplaces and homes for generations of Londoners, and, steadily, every day, they are vanishing.

Shame on us. Having escaped the wartime destruction that reduced so many continental cities to teetering façades and piles of rubble, we have now allowed our relatively unscathed capital to endure a similar filleting – only now we cloak the whole indecent process behind acres of polythene sheet stretched across scaffolding. It is a strategic offensive schemed out in council meetings, rather than military map rooms.

How, in the nation which nurtured and codified the concept of common heritage ahead of all others, placed the protection of the built past on statute as no other country had done, can this be happening?

Much of the problem lies in the guidance, rules and laws that apply to the protection of historic buildings and their less esteemed cousins – those buildings that though lacking in any great architectural merit nevertheless are deemed to be part of an interesting, familiar chunk of a town or city. Yet this protection of buildings is, in reality, often little more than skin deep. The street frontage is what is identified and protected in, say, a formal listing description – but whatever lies behind the front is, de facto, frequently relegated to disposable old tosh, destined for the crusher and skip.

Does it really matter, apologists for this façadist onslaught maintain, if we eviscerate an old building so long as its external appearance is left sufficiently intact to con the casual passer-by? Who cares?

The entire culture and law of architectural protection in Britain is founded, in large part, on ideas first promulgated by Ruskin and Morris, the Marx and Engels of crumbling stonework. Their most significant tenet was the avoidance of deception in all its forms, and the promotion of truth in materials and structure. No veneers, no façading, no con. In theory, these remain, to this day, the core principles which guide our conservation bodies. Yet the chasm between these ideas and what is now deemed acceptable by architects, developers and the sundry bureaucrats who are supposed to hold them in check can never have been wider.

Philosophical wibbling over depth, truth and substance might have remained the province only of the dwindling, demoralised band of career conservationists had the whole matter not been brought to the surface by the horrific blaze which destroyed Grenfell Tower in June. The drive to renew the block’s façade while neglecting the ageing interior appears to have been the salient dysfunction leading up to the disaster. See what happens when architects, developers and politicians hold sway – terminal two-dimensionists, the lot of them. Nothing good, that’s what.