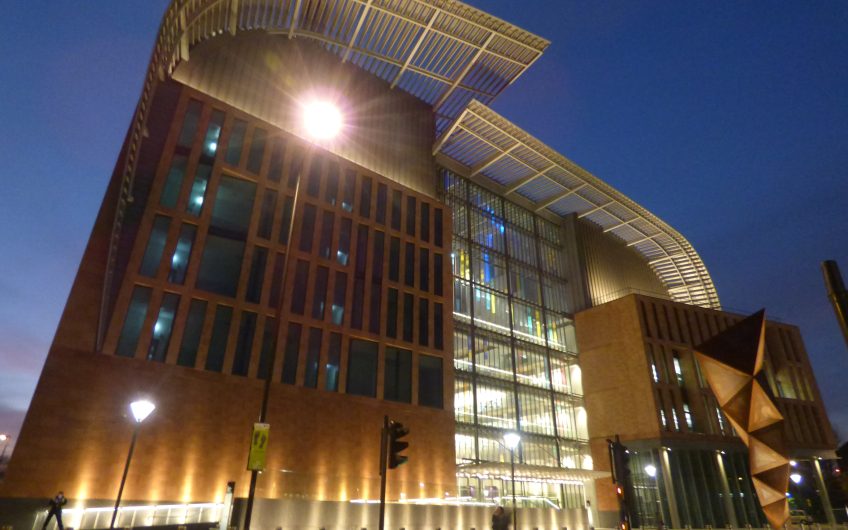 Two years ago, the Queen officially opened The Francis Crick Institute, a magnificent building tucked away behind the British Library, in London’s often overlooked Somers Town.

Two years on, the newcomer has become a powerhouse. Indeed, the whole area’s DNA has been transformed from the coal wharves along Regent’s Canal to this new building. But what exactly is it and what happens there?

As the Oldie found out when it visited earlier this month, the Crick is the largest biomedical discovery institute under one roof in Europe.

The vaulting architecture matches the institute’s vaulting ambitions. Not only is it an unusual shape, it also houses an unusual, but blindingly obvious concept: that scientists from across disciplines should work together and not apart. Hence the shell-like roof that embraces the four interconnected blocks.

Underneath it, there are almost 1,500 staff researching the biology that keeps humans alive. The interdisciplinary ethos turns on the head the image of the geeky scientist in a white coat working alone in the lab to, well, a lot of geeky scientists working together for the common good of those of us who can’t even spell Deoxyribonucleic acid; let alone know that it is more commonly called DNA, the molecule that makes us uniquely us, and whose structure Francis Crick helped to discover, leading to his Nobel prize in 1962.

The institute is a breeding ground for future Nobel Prize-winners. It is crammed full of the top scientific brains from around the world and has become so recognised among burgeoning Crick and Watson’s that it received more than 1,500 applications for its 45 PhD places last September.

When the Oldie was invited in, the vast building was buzzing with excitement. The idea of fusty labs filled with Bunsen burners falls away when you see the vast atria with cantilevered bay windows, filled with open-plan meeting places created precisely so that researchers come together to talk about their work and ideas. There are still plenty of labs where research boffins are burrowed away, but they are encouraged to come into the light and share.

This ethos means that teams of experts in one field can cross-pollinate with teams in other fields to prevent, diagnose and treat illnesses, rather than stick to the traditional silo of one discipline not knowing what the other is doing: collaboration not competition.

Last month, Cancer Research, one of the Crick’s founding partners, brought together three leading scientists, Dr Sophie Acton, and Professors Peter Johnson and Caetano Reis e Sousa, to discuss immunotherapy, a cross-disciplinary approach that began with immunology and has now moved into cancer biology. The ultimate goal is to harness the body’s immune system to combat cancer and, further down the line, neurodegenerative diseases to do with ageing.

It is considered inevitable that researchers will crack cancer at some point. Already Professor Reis e Sousa’s specific work on dendritic cells – central players of the immune system – is also exploring how they detect tumour cells and might initiate an anti-cancer immune response. In time, his work may open possibilities for treating diseases like Alzheimer’s. For us Oldies with less time than others, having experts from different disciplines sharing their findings while working under one roof speeds that progress.

But it is not just a building for boffins. There is a public gallery space to explore what goes on behind the scenes. The current free exhibition, Craft & Graft (until 30 November), focuses on the specialist technicians, like the fly breeders, tech-fixers and even bottle washers, whose vital work makes the science happen.

Who knew that 70 per cent of genes for human disease have a fruit fly equivalent?

Diary of a student, aged 62 and three quarters. By Nicola Foote