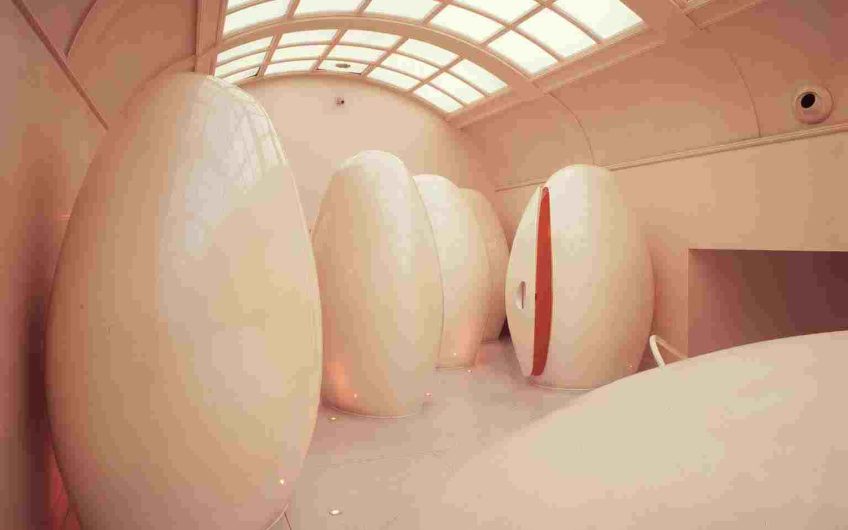 Behind its Georgian, stucco façade, a Mayfair restaurant heralds a new dawn in British lavatorial design. By Lucinda Lambton

This is as surreal a spot as it is possible to imagine: 12 seven-feet-high fibreglass eggs, each containing a lavatory. They were created in 2003 inside sketch (no upper-case letters here!) restaurant in London’s Mayfair.

They were designed by Algerian restaurateur Mourad Mazouz to be the stars of the restaurant’s glazed atrium. Built in 1859, the atrium was designed by congregationalist James Edmeston, an architect and author of 2,000 hymns. He wrote one every Sunday, including Lead us, Heavenly Father, lead us.

What a curious discovery! Such shocks to the senses abound in this building, with an assembly of bars and restaurants designed to within an inch of their 21st-century lives. They lie behind a distinguished façade of 1779, designed by James Wyatt, architect to George III.

Only a strange, faceless stone dog affixed to the wall prepares you for the abundance of decorative oddities behind the 18th-century exterior. With arched and pedimented windows, as well as gigantic pilasters and garlanded friezes, your neoclassical expectations are high.

Yet even this turns out to be a pleasing surprise, for the handsome ‘stone’ exterior is in fact stucco: one of the first buildings in the world ever to be given this fine coating of plaster. One Dr Bryan Higgins took out a patent for the process in 1779, the very year this house was built.

No 9 Conduit Street, though, is not like others. Straight away, the shocks are extreme. Wyatt’s barrel-vaulted hall ceiling has been gilded and the staircase has thick swirls of pink and puce resin dripping down the steps.

In the Glade restaurant, murals envelop you in a delicate forest and a transparent, fluorescent, pink pianola tinkles forth by itself. In the Parlour bar, chair feet are carved and clad in ballet shoes. There are lavatories that look and play like musical boxes, and a rustic chandelier the size of a tree.

It is, though, the giant lavatorial eggs that, above all else, have a particular, not to say peculiar, originality. Mourad rightly claims that you can judge a restaurant by its conveniences and these pass with flying colours.

Step up one of two sweeping staircases on the first floor and you are surrounded by the eggs. When you open their all-but-invisible doors, their secret role – and a very surprising one it is, too – is revealed. The Gents are lit up with a blue light and the Ladies with pink.

And if these ‘pods’ are not already extraordinary enough, then see them at dusk, when the natural light fades and electric hues start to glow around their contours: again in either pink or blue.

Those who created sketch must be keeling over with delight at the success of how it has developed over the years. During the Chelsea Flower Show, sketch opens a fitting show of its own, with an outlandish smothering of blooms throughout the building. The tops of all the eggs have been covered with turf and moss and planted with shrubs, blooms and topiary.

One Easter, every egg was topped with a life-size, lifelike goose, some of them on nests of twigs. Over Christmas, faux snow lay heavy on them, often with snow-laden trees and bushes. Another year, the eggs were elaborately gift-wrapped with huge bows.

All the atrium’s glass has now been transformed by panes of the most vibrant hues: scarlet, yellow, pale and royal blue, turquoise, purple and orange, all screeching their shades over the eggs.

Let us dwell once more on James Edmeston, the Congregationalist. What in heaven’s name would he think of it all?

In the positively brilliant beginnings of modern sanitary history, in the 1870s, Britain invented the flushing WC with fantastically fanciful forms. By the 1970s, that British lavatorial design became bereft of all interest and charm.

The only exception to dreary white forms were ‘suites’ in avocado, primrose or an alarming puce with black trim. It took many grim years for the realisation to dawn that design in this field should and could improve.

Today, developments of sanitary design have gone hand in hand with the most futuristic of forms and technology. Architects and designers create lavatories and cloakrooms that are the most daringly designed aspects of their buildings.

As separate entities on a smaller and more affordable scale, these all-important rooms allow the whim of the designer to flourish unbridled, flouting all convention and answerable only to a captive audience!

Today, with a computer click on the word ‘toilet’, the world is your oyster: from these futuristic eggs to ‘Victorian Gothic’ suites. The so-named Stratford range is edged with thick ceramic rope around the bowl, bath, cistern and washbasin.

The grand old firm of Twyford is at the forefront of lavatorial design with the VIP: the Versatile Interactive Pan can be moved up and down to suit the tallest and the smallest, as well as those who wish to squat or want to use it as a urinal. There are also sensors that detect trouble with your health or diet.

The eco-lavatory is the lavatory of the future and many systems are now successfully in use. Let us hope their development will go hand in hand with good design, with aesthetics and technology working in happy harmony to improve the human lot.