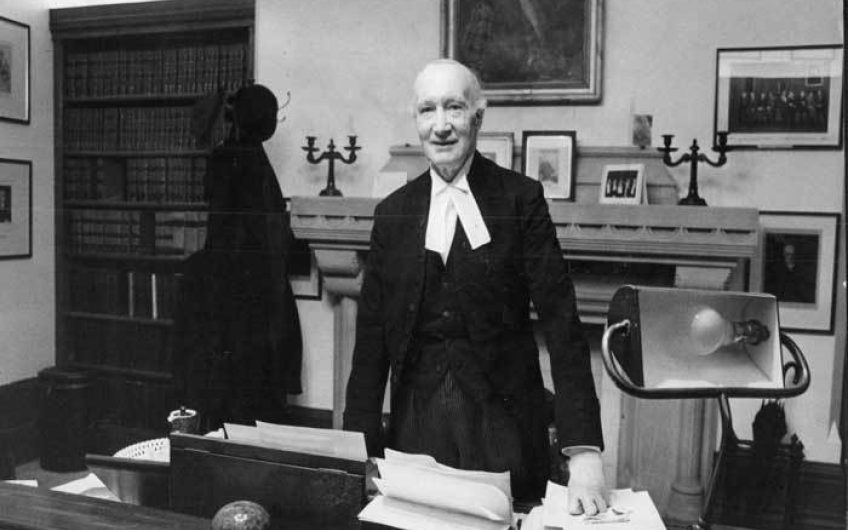 As Master of the Rolls for twenty years, Lord Denning was perhaps the best-known judge of the 20th century – remembered among the public principally for his inquiry into the Profumo affair in 1963.

His fellow lawyers knew him for his tendency to ignore statute law when it conflicted with his notions of justice; many of his judgements were consequently reversed, though some were later confirmed by Parliament.

Auberon Waugh once described him as ‘a lovely man’: he spoke in a gentle Hampshire voice, which he retained from his modest background as the son of a village draper. Late in life he got into trouble for saying that the Guildford Four and the Birmingham Six should have been hanged.

Having been born in the reign of Queen Victoria, he saw action on the Western Front in 1918, became a High Court judge during the Second World War and died a few weeks after his hundredth birthday.

On the train travelling to Bristol I took a seat opposite a florid, elderly man with wings of white hair wearing a smart (though grubby) collar and tie and a voluminous black coat. On the rack above were a bowler hat and stick. On the table between us was a battered, cheap cardboard attaché case and beside this was a pile of orange peel. The man was eating an apple.

Pieces of apple stuck to his stubbly chin. His clothes were untidy, crumpled. The phrase ‘gentleman of the road’ occurred to me.

I put my bag on the table. He began to grope on the floor at his feet.

‘You knocked my banana off the table with your bag,’ he said.

I apologised, and went on hands and knees to search for the fruit, alas without success.

People nearby were laughing behind their hands. He opened his case and pulled out a folder containing a pile of letters, envelopes, papers, some of which fell on to the floor. I thought to myself: here is an impoverished aristocrat carrying on a brave but ultimately doomed attempt to regain the family fortune.

He got up and went towards the toilet. A man sitting across the aisle leaned over and said: ‘Do you know who that is?’ I shook my head and he went on: ‘It is Lord Denning.’

‘Positive. I used to practise as a barrister.’

The Lord came back from his ablutions and we sat in silence until we approached Reading. As he put on his bowler and made ready to leave the train, he said to me, smiling: ‘The banana was in my case all the time. I am so sorry.’