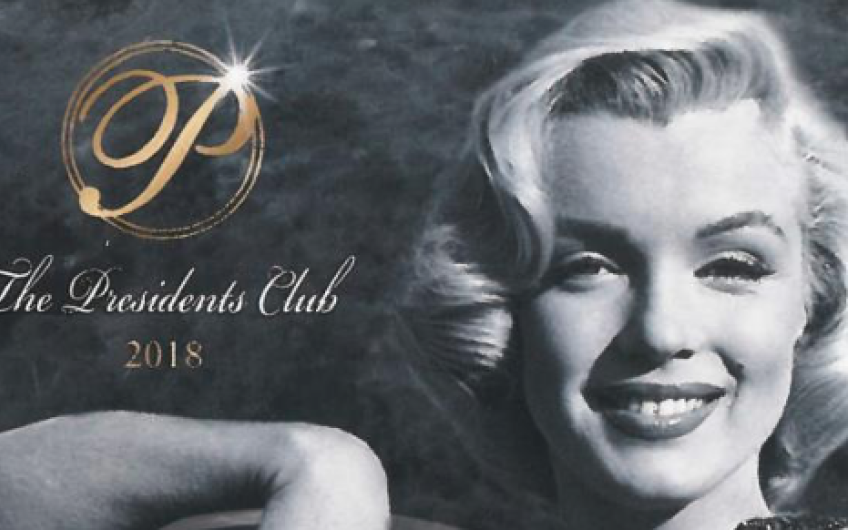 The scandal of the infamous Presidents Club reminds our publisher, James Pembroke, of his own experience with the Young Presidents Club, a far more respectable group of CEOs under 50.

James wrote this piece for The Oldie in 1994 about his evening with the subsequently imprisoned Lord Brocket who reluctantly played host to the Young Presidents and their lady wives.

As Auberon Waugh once wrote in The Oldie, an Englishman’s ambition is to own a large country house. If that is an Englishman’s ambition, his fantasy is to be an English lord. Oh, it will never be admitted, except by those who are honest enough to purchase a title, but on those long solitary train journeys, when minds wander, an Englishman’s head is often adorned with a coronet. Hence, our belief that Tony Benn, who reversed the situation, must be mad.

I spend most of my train journeys being interviewed on television about my deeds of valour, feats of ingenuity and ground-breaking plays. But it was an alarming experience actually to enact one of these dreams of glory.

‘All we have to do,’ said my wife, as she then was not, ‘is pretend to be Lord and Lady Brocket for an evening. Five hundred Americans have paid a fortune to have “a gala evening with the British aristocracy, at charming Brocket Hall”. Chance Entertainment want me to hire four other people to make up the family.

‘But, Josephine,’ I wailed, ‘who in their right mind would pay a fortune to have dinner with impostors. Why can’t the real Lord Brocket do it?’

‘But then they’ll know that they’ve been conned... they’ll be livid!’

‘Rubbish. They’ll know we’re fakes and will just find us amusing. Look, when were you last paid a hundred pounds to go to a party?’

Three more would-be aristos were soon rounded up: Penny, a Welsh girl; Matt, an Australian; and Sara, who works for Andrew Lloyd Webber. It was decided, in the tradition of school plays, that since Matt was the tallest, he should be Lord Brocket. Sara, the second tallest, would be his wife, Josephine would be his sister, I would be his errant younger brother and Penny would be my even more errant girlfriend.

We met at St. Pancras and jumped on the train to Welwyn Garden City.

It was a rather depressing entrée to the pages of Debrett’s. Matt, the only real thesp, spent the journey practising his accent. We complained to Josephine that he had been over-zealous. ‘Oh, it’s in his blood,’ she explained. ‘He’s from a major Australian theatrical dynasty.’

Matt’s moment to outrank us amateurs had arrived. ‘My father was Matt Hammond, the Chief Ranger in Skippy, the Bush Kangaroo.’

The Redgraves have no cause to look to their laurels. Matt went on to tell us all about Skippy. Apparently, there were three Skippys: one for jumping and action shots, a good- looking one for close-ups and an understudy Skippy, who stepped in when the other two were resting, and who earned most of his money in commercials.

We arrived at Brocket Hall and introduced ourselves to Chance Entertainment, in the most extravagant marquee to hit English shores. There was a table in the middle of the dancefloor, where we Brockets were to sit so that everyone could get a good view of us at play. The woman from Chance Entertainment didn’t look too impressed by this troupe of bedraggled actors. We assured her that we all had black tie. Suddenly, the whole idea seemed distinctly dodgy.

At that moment a tall, confident man and woman strode in, with attendant lackeys. ‘Don’t worry,’ said Lord Brocket (for it was he) in front of his Long Island-bom wife. ‘Americans will believe anything.’

It was agreed that he would kick Matt out of the marquee after dinner, and then make a speech. He left, with the fawners at his heels. It wasn’t his problem.

Sara asked who were these 500 guests. ‘Mostly Americans,’ said the lady from Chance. ‘They’re members of the Young Presidents’ Club and have paid about £40,000 a head for a week of entertainment in England. This is their last night and they want to have a good time.’

It was simple. These people had paid for a night with the aristocracy and nothing we could do would convince them they were getting anything less. As for the unmasking, it would be taken in good humour - they’d all love it.

It was five o’clock and our guests were due at 6.30. Matt and I were putting on our dinner jackets, when I discovered that I had mistakenly brought my flatmate’s trousers, which were three inches short. We went to the main hall and met up with the others, to compare sartorial notes. Josephine was wearing a see-through lace body-suit, which she wore in her cabaret act, Pussies Galore. Penny, another of the Pussies, was in a minidress. Only Sara and Matt would have been allowed into Annabel’s.

We took a quick look round the house, which was all that the Young Presidents could have wished for - huge oil paintings, and sufficient grandeur to make Jack Cade leap from his grave and start all over again.

The coaches were coming down the drive. From now on I was to be the Honourable James Nall-Cain. The five of us stood in a reception line at the front door, while the guests tumbled out of their charabancs.

They were all wearing plastic boaters and had 18-inch cigarette- holders with fake cigarettes. However, the moment they saw us, they fell into an awed silence and an orderly queue. The curtseys and bows began. We were five popes, granting absolution. After an age of ‘welcome to our pied-a- terre’, we mingled with the throng.

They all had name badges, but the only one I could remember from the formal introductions was Beverley Whipple from Wisconsin, so I bestowed my graces upon her.

‘And?’ she demanded, hinting at greater distinction than just a curious surname. I hesitated. ‘Haven’t you read my book? John!’ she cried to her husband, ‘It’s Lord Brocket!’ The room turned. Beverley had bagged her tiger. In seconds, I was surrounded by outstretched hands. But I was Beverley’s and not up for auction. She dragged off her prize.

‘You don’t know my book about the G-spot?’ If I’d been told she was an author, I would have expected her to have penned a sequel to Uncle Tom’s Cabin. She was five foot two, elderly, and apple-pie wholesome. ‘I’m Beverley Whipple, who found the G- spot. You know about it, don’t you?’ Well, she certainly did. And two minutes of trigonometric finger-bending instruction ensured that I should henceforth be able to land right on top of it, blindfolded, from a standing jump at a distance of five feet.

Beverley also explained the mysteries of the Young Presidents. They met with their wives about six times a year for a week’s ‘mind-broadening and education’.

Beverley had been invited along with her husband to give one of the lectures. And what did they all have in common? They had all become presidents and chairmen of vast companies before the age of fifty. They were from all boulevards of the globe.

It was quite obviously a way of making extremely useful business contacts but every time I mentioned this possibility, they shouted me down, albeit sycophantically.

Oh yes, a title has tremendous power. Suddenly, hugely successful men and women wanted my advice on everything from their children’s education to the best type of grass to import for their lawns in Buenos Aires or Tokyo.

Beverley, who seemed something of a joke to the YPs, was suddenly a star because she had me.

I desperately wanted to confess to my deception. I knew she’d be crippled when she found out after dinner.

Meanwhile she was feeling even sorrier for me, being the younger brother.

Occasionally, I would look over my shoulder to see Josephine’s knickers peeking through her outfit. But nothing would shake their belief. During dinner, we wandered around the room to see if our guests were all right. Daughters were hurled at us for dances. All of us were dreading the moment when Brocket arrived.

We clung to the doorway.

Matt got up to deliver his speech. Our peer in absentia arrived and literally kicked Matt off the stage.

‘Some of you may be concerned that my wife is wandering around in a see-through dress,’ he boomed. ‘Well, here she is.’ And there she was, in a long Catherine Walker dress, glowing with Long Island breeding and charm.

Some of them tried to laugh, others were livid. As I bolted for the service tent, I caught a glimpse of Beverley’s tears. It was the most cruel trick.

Though £100 came in handy, fantasies on train journeys have never been the same since. Admittedly, this is partly due to the fact that I’m now married to Josephine, and silences are few and far between.