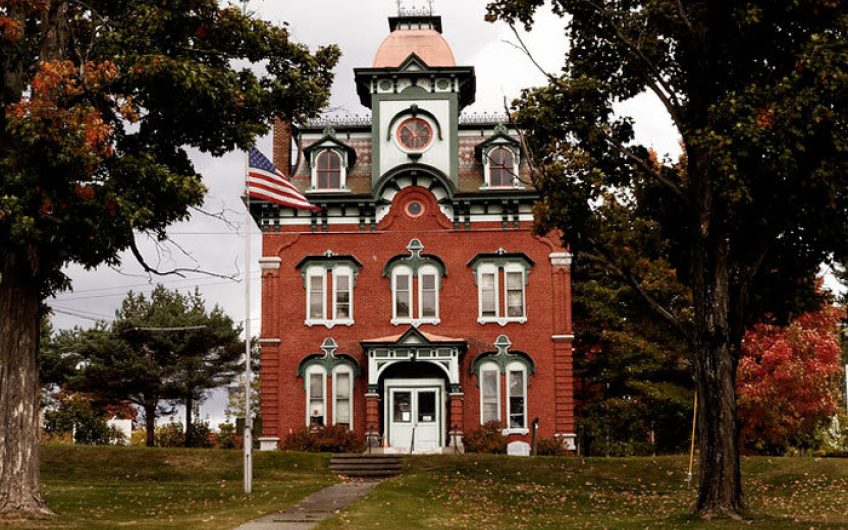 I wanted to buy one of those 1920s Edison phonographs. Not so I could listen to 78s on it, but for the oak cabinet, so I could listen to LPs without looking at a ziggurat of Seventies hi-fi units. This being America, I found a network of dealers specialising in Depression-era antiques. But, this being America, they were all patriots. They refused to sell me a restored machine, so I could replace its iron American innards with Japanese plastic.

Eventually, I found a dealer in Reading, Pennsylvania, who hadn’t seen Sands of Iwo Jima. He was willing to sell me a tiger oak cabinet that he had gutted for spares. It was only $150, but the shipping would cost twice as much.

I looked at the map, and made a short time-and-motion study. If I drove from dawn to midnight and timed the loop around New York City right, I could cover the 700 miles in a day and spend perhaps $100 on sustenance and gas.

The sun rose as I steered my Volvo estate out of the neighbourhood and onto the Massachusetts Turnpike. I had a flask of coffee, a couple of poppyseed bagels, and a box set of Herbert von Karajan collaborating with an orchestra on the Beethoven symphonies. There was nothing on the Pike except the early birds heading the other way into the city. My thoughts were my own, but I had none, because I had Herbie at top volume and the windows down.

You could drive at autobahn speeds on American highways because they’re so straight and empty, but the speed limits are often lower than those of an English country lane. In New Hampshire, where residents are armed to the teeth and dosed to the eyeballs on OxyContin and home- brewed meth, the speed limit is 55mph.

But speeding on a road trip is an illusion. America is so big that the gains are marginal over the course of a day. If you push it like you’re commuting in the Ruhr or the Thames Valley, you’ll exhaust yourself in an hour. The trick is to keep the wheels rolling along, and let the road and the music do the work.

I made the New York state line in the last movement of the Eroica, stopped for gas, wiggled over the Hudson at the Tappan Zee Bridge and across the top of New Jersey, and then slipped into Pennsylvania. Herbie was into the Fifth as I sailed down the Appalachian Valley past the ruined Bethlehem steelworks, near Allentown, and the nuclear plant at Three Mile Island.

I pulled off for lunch north of Philly, and the exit ramp led up to a ridge. The junction overlooked a green valley with a town on its right flank. I felt I had been there before as I turned right, hit a rundown Main Street, and found a diner. Inside, everyone was white, short and dark-haired.

She told me that Morgantown used to be a coal town, and its people were descended from Welsh miners.

Now I remembered when I had been there before. Eastern America is a geography teacher’s nightmare, in which the map of Britain is chopped up and rearranged like a William Burroughs ‘cut-up’ sentence. I never know where I am going, because I cannot forget where I’ve been. Boston used to be outside Lincoln, but now Lincoln is outside Boston. Chelmsford was east of Bedford and south of Carlisle, but now Bedford is south of Chelmsford, and both are east of Carlisle.

Geography got lost in the American translation, but history endures. In Albion’s Seed (1989), David Hackett Fischer traced the origins of American culture to the displaced tribes of the Eastern seaboard. The exodus of East Anglian Puritans to Massachusetts supplied corporate and educational ethics. The gentry of the Southern plantations were descended from Cavaliers and, whisper it, their indentured servants. Mid-Atlantic industrial culture was formed by Quakers from the Midlands. The Scots and Irish shaped the back country of Appalachia and the ranch style of the West.

And a few Welsh families settled Morgantown, dug the coal that powered the trains that linked the coasts of the imperial state, and stayed there after the mines closed, like a lost tribe in a Bruce Springsteen song.

Eisenhower’s highways cut across the map, but once you’re on the local roads, you’re back in the human archipelago. I once changed planes in Santa Fe, and a Native American in a blue-jewelled cowboy hat floated towards me on a moving walkway. I once took a wrong turn in Chicago, and found a paradise of Swedish-speaking bakeries.

After the Welsh valley of Morgantown, the land flattened into German and Dutch farms – Witness country. The farmers were selling their heirloom sideboards and tables by the side of the road. I turned off, and saw an Amish man on a horse.

I found my dealer in Reading, loaded my booty into the boot, and turned for home. The return leg was endless. Herbie and the band ran out of tunes, and after the choral finale of the Ninth, I was on my own. Driving east, I felt as if I were pushing against the current of American history. At midnight, I spun the dial, sipped my coffee and counted down the neon lights for home.