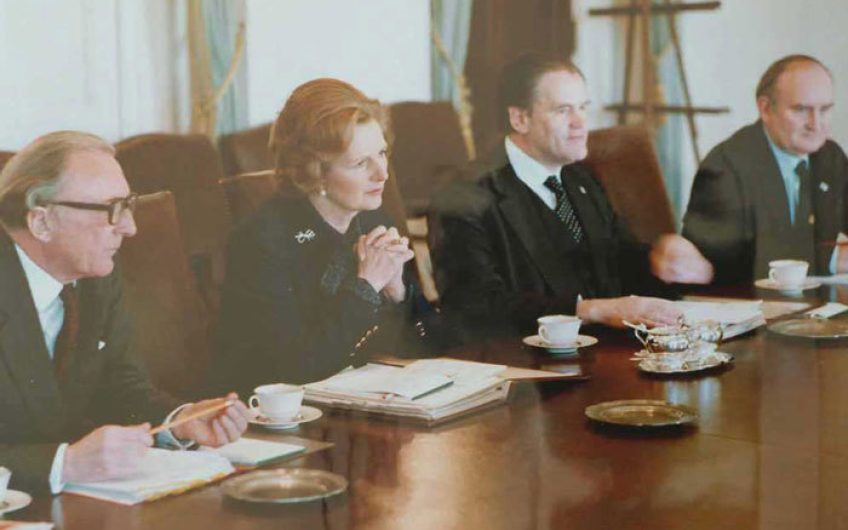 Margaret Thatcher in the White House Cabinet Room, meeting President Carter, on 17th December 1979, shortly after she came to power 40 years ago
View Full Size
1
of 1

I met her only after her fall from power, when she chaired a colloquium at which I spoke. When I finished, she said to me, confidentially, in a kind of feline whisper, ‘I can tell that you’ve spoken before.’

Naturally, I was flattered; and when I met her again the following year, she remembered who I was and quickly proved that her alleged memory was not just a pretence. It is difficult to dislike an important person who remembers who you are after meeting you only once twelve months before and who, in the meantime, must have met hundreds, if not thousands, of people.

In any case, I found her charming (I think she liked men better than women) and it was obvious that she was, or had, a considerable personality. She was far more fun than one might have supposed. She had character too, which is not the same as personality. She staked her future on what she obviously considered a matter of principle, the retaking of the Falklands, which was extremely risky; and she brushed off the attempt to murder her and all her government without the aid of counsellors who circle disasters like vultures.

But of course one cannot assess a politician’s legacy entirely by personal recollection or by encomia to the force of their character. And over the years, I have come to see her legacy in a more negative light, without it in any way altering my esteem for her as a person. There is, in any case, only so much a politician can do, at least in a normal polity, and it is rarely that good effects come without bad.

My late friend, Peter Bauer, used to say that Mrs Thatcher had two great achievements to her name (but only two): the destruction of the power of the unions, and the raising of him to the peerage. This was not meant a hundred per cent seriously, but the kernel of truth, or what Bauer believed to be true, in it was that she was much more strident in speech than in action, and by making herself so disliked, or hated, by many, she discredited the ideas that she espoused but seldom put into practice.

I was absent from Britain for much of the decade that she was in power, and this made it much to see that she left the country much more prosperous than she had found it. She restored a belief in commerce as an honourable activity, which was very necessary: she was the Guizot of our times (and aroused as much antagonism as he had done): Enrichissez-vous, she told the British population, if you want a better life.

It is obvious that she found Britain in a parlous state. The economic model espoused by her opponents was that almost everything should be subsidised. But of course subsidies require a subsidiser, and as she famously put it, the trouble with socialism is that you run out of other people’s money. It was clear that things could not go on as they were.

But there was a dark side to her restoration of the prestige of commerce to a nation that had once been known above all as commercial. Whatever she believed in private, she gave the public the impression, both by word and deed, that she believed that commerce should reign supreme in all walks of life, and that the only line that counted was the bottom one. And she appeared to believe, with a faith touching on the religious, in management as a science in itself, irrespective of what was to be measured, or in what circumstances.

Without intending to, she corrupted the public service which until then had been inefficient but not notably corrupt. She found it inefficient, and left it both inefficient and corrupt. She did this by a failure fully to appreciate that the disciplines and incentives appropriate to private enterprise cannot automatically be transferred to a public service whose output is not easily measured or its success estimated by double-entry book-keeping. She turned the public purse into a fund for bureaucratic looting, which is what it remains, and the fact is that almost any low-level bureaucrat is able without difficulty to subvert or undermine the intentions of any political superior, however forceful or determined the latter. The politicians propose and the functionaries dispose, and Mrs Thatcher was not able to escape this quasi-law of modern political life.

While the public service could not be dismantled (Mrs Thatcher never went so far as to say that it should be), the powers of management and administration within it increased dramatically, and the bureaucrats seized the opportunity with both hands. They started to claim not only that they were businessmen rather than mere bureaucrats, but to claim the perquisites of businessmen, and awarded themselves such. Empire-building, administrative expansion, pseudo-information-gathering, the proliferation of meetings, the development of an hermetic language and the loss of any understanding of the underlying purpose of the supposed service, became the norm.

I think that Mrs Thatcher also misunderstood the nature of the British population also. She thought it consisted of honest, upright, hardworking, thrifty people who were thirsting for the opportunity to improve themselves as she had improved herself. Perhaps they were like that in Grantham in 1938 but, if so, they had changed in the interval. They were more spiv than entrepreneur, more inclined to spend money they did not have than to save it and more cicada than ant.

The upshot was the Tonyblairian state, in which licensed traders protected by regulation made immense profits on the basis of cheap credit extended to one and all, while a bloated public payroll, also paid for by debt, offered lucrative careers to those who worked in them while providing often abysmal services to the multitudes. In other words, again without in the least intending to, Mrs Thatcher played John the Baptist to Mr Blair’s Christ. Her legacy was not freedom of enterprise, but corporatism.

I am not sure, however, that anyone else could have done better, and the comparison with her current successors from the point of view of calibre is indeed a painful one.