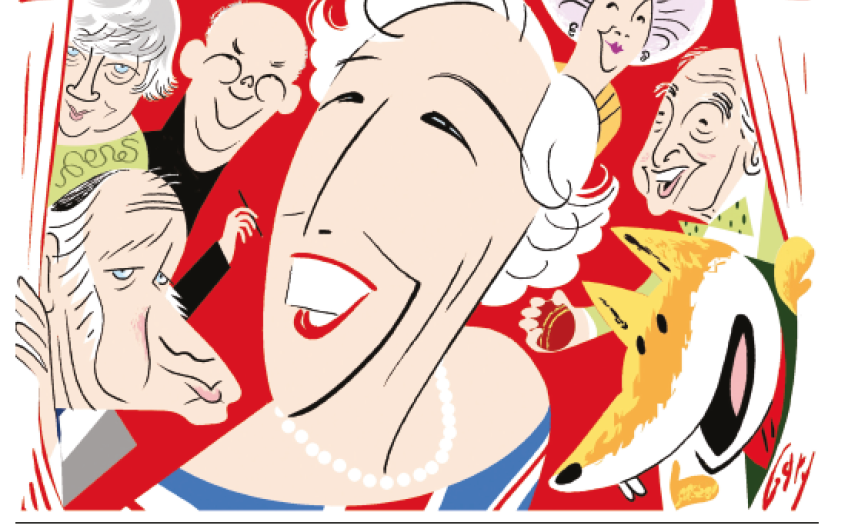 The Oldie of the Year Awards saw a dazzling galaxy of stars at Simpsons in the Strand on Tuesday.

'When Daniel Craig steps down as James Bond, would you consider making me your Double O Three and a Half?' said Basil.

Dame Judi graciously agreed. She was there to present the Oldie Palmer d'Or Award to her co-star from As Time Goes By, the great Geoffrey Palmer, who's just turned 90.

'I wish, wish, wish that this was the awards for "most promising newcomer" or maybe even "the naughtiest man I ever had the pleasure to work with", but it’s not. It’s the Oldie awards,' said Dame Judi, addressing Geoffrey, 'I’m going to quote Bernard Shaw, as he said about Ellen Terry: "She never seemed old to me." Well, nor you to me.'

Henry Blofeld – our Dear Oldie Thing of the Year – recounted how Ian Fleming had invited him to lunch on his honeymoon, where he broke it to him that he had named his evil criminal mastermind Blofeld after the beloved cricket commentator.

April Ashley, our Oldie Woman Ahead of her Time, recalled her encounter with Albert Einstein. And Alan Ayckbourn, our Oldie Drama King of the Year, remembered a drama student in the 1970s saying he would devote his career to modern comedies. 'Like Ayckbourn, then?' a friend said, to which the student replied: 'No, I mean living playwrights.'

Shirley Williams declared how delighted she was to become Oldie Political Legend of the Year.

The cheers really raised the roof for our principal Oldie of the Year, Dame Vera Lynn. In the past year, aged 100, she has outsold all female artists, written a book about her time entertaining the boys in Burma, and saved the White Cliffs of Dover. Not bad!

Her daughter, Virginia Lewis-Jones, collected her mother's prize to the strains of There'll be Blue Birds over the White Cliffs of Dover.

There is nothing like Dame Vera Lynn. And nothing like the Oldie of the Year Awards in their 25th anniversary year!

The Oldie of the Year

This year’s prize goes to a national, and international, legend. Six more epic winners from the world of stage, screen, sport and politics were revealed on January 30th over lunch at Simpson's-in-the-Strand.

Anne Robinson appeared on her show and found it dingy, cheap and disturbing.

The comedian has had enough of health and safety infantilising Britain.

She’s back on our screens in The Real Marigold Hotel, but dealing with the TV suits is a nightmare.

The Pankhursts hated each other – Jad Adams

Their biographer celebrates the centenary of the women’s vote but mourns a family at war.

PLUS Michael Simkins on appearing in the new Abba film; Princess Margaret’s love of the musical Oklahoma!; Gyles Brandreth on Just A Minute fans in India

You can also hear actor Michael Simkins, talk about how a surefire flop can so easily flip into being a smash – and vice versa.  Simkins has first-hand experience of both. He talks about the ‘nature of acting’ with Harry Mount and Annabel Sampson – ‘You are essentially on a tightrope; on one side lies triumph, and on the other, doom.’ Listen here.

Richard Blair – George Orwell's son – reminisces about his Jura Childhood on The Oldie podcast. He and Annabel Sampson – who spent many a childhood summer on the island – discuss the place and Richard's near-death experience aboard a dinghy that capsized at the Corryvreckan whirlpool. The site, he later reveals, is where he plans for his ashes to be cast – ‘so the whirlpool will finally get its dues’. Listen to the conversation here.