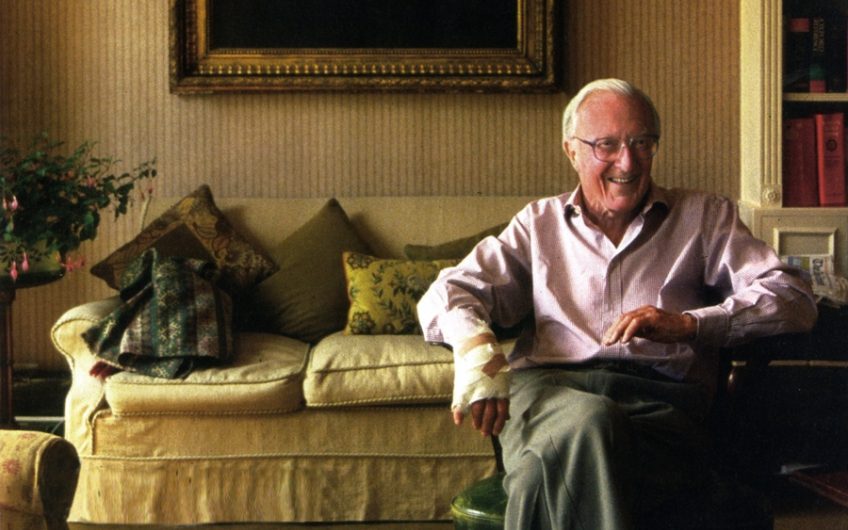 Lord Carrington emerges from his lovely 17th-century manor house in the village of Bledlow, with a devoted Sir Edward Heath running protectively in front of him. Edward Heath is a dachshund, and all the Carringtons’ dogs are named after prime ministers. Visitors often ask if there’s one called Margaret, but Carrington is too polite to say he doesn’t normally have bitches, although he was recently given one he renamed Hilda (Thatcher’s middle name).

Besides a fondness for dogs, Carrington is rather keen on bees. There are 365 hives on his Buckinghamshire farmland. Honey keeps you fit, says Carrington, who certainly looks younger than his age (87) and is in excellent shape: slim and energetic; sharp and quick-witted. Unfortunately, he is unable to shake hands because he has just had an operation for Dupuytren’s Contracture, a condition which means the little finger can’t be straightened, and his hand is heavily bandaged. Oddly, this somewhat unusual ailment also affected Mrs Thatcher.

Peter Carrington is an impressive man, the more so for his huge sweep of experience. A wartime Grenadier and MC, his ministerial career spans more than thirty years and six prime ministers. He is (along with Bill Deedes) one of the last living ministers to have served under Churchill. He was a junior agriculture minister (dealing with the Crichel Down land case), then High Commissioner in Australia, First Lord of the Admiralty, Leader of the House of Lords, defence secretary, energy minister and, most notably, Mrs Thatcher’s first Foreign Secretary, a job he greatly wanted and much enjoyed: ‘The summit of my political ambitions.’ After he resigned at the start of the Falklands War, he became Secretary General of NATO, and has held numerous directorships including being chairman of GEC and Christie’s.

He claims he never wanted to be prime minister ‘because I don’t think I would have been very good at it’. He loathed visiting local Conservative Associations, and says the unhappiest period of his political life was in the early Seventies when he was party chairman.

The Lancaster House conference on the future of Rhodesia was a tempestuous time, and has remained controversial. ‘For the first fifteen years Mugabe behaved with great good sense... Now it’s awful; he just wants to stay there regardless of the damage he does and the whole thing is a shambles. I’m not at all optimistic that things will improve.’

That aside, he engagingly admits that politics has been fun. Carrington has enjoyed the independence of being a landowning peer, with a financial security which most MPs no longer have. He disapproves of the ‘professional’ politician. ‘They go from university to a think tank to being a minister’s aide, to a candidate, to an MP and they’ve never done anything else. I think that’s very bad.

‘On the whole the chemistry with her wasn’t bad. I’m fond of Margaret [Thatcher]. She enjoys a good squabble’

They’re so limited in their experience.’ Some would say Old Etonians - such as those around the new Tory leader David Cameron - don’t have wide experience of life either, but Carrington firmly says that’s irrelevant. ‘What matters is what people are like, not where they came from. None of them are in touch with the voters. I think we want some leaders.’ Would the Tories do better with somebody older and more experienced than Cameron? ‘Probably, if there’dbeen anybody. I think he’s done jolly well, I really do.’ Nevertheless, Carrington is not on message re green issues - he is dismissive about organic farming - and he shudders at the idea of women-only shortlists.

On Europe, he has moderated his views. He used to be ‘violently Europhile’, but he is opposed to a federal Europe and thinks the idea of a European foreign secretary, when there is no common foreign policy, is ‘an absurdity’. But he is all too aware of Cameron’s problem. ‘It’s very difficult to be Leader of the Opposition at a time when the government’s got a few years to run because if you produce a range of policies, either the government will pinch it or rubbish it... But the truth of the matter is that oppositions don’t win elections, governments lose them. Look what’s happening now -1 can’t believe it will do the government any good that they thought only 15,000 people would come from eastern Europe, and 600,000 did. They’re just incompetent. And they’ve demoralised the civil service by saying they’re absolutely useless!’

He thinks the UK is now much less important internationally than it was before Blair. ‘Iraq, and more recently Lebanon, have totally sidelined us. We have far less influence than we had. That “Yo, Blair” exchange when a microphone was left on. It was so humiliating.’ Carrington blames the war in Iraq - which he personally opposed in the Lords - for Britain’s decreasing influence. 'I cannot understand why the Conservative Party didn’t say, “Don’t do it...” Blair got it wrong, and it’s been catastrophic. He’s a busted flush. And his refusal to ask for an immediate ceasefire when they were absolutely decimating the infrastructure of Lebanon... It’s absolutely deplorable.’ Besides criticising the Tories for not opposing the war in Iraq, he thinks Cameron and his shadow foreign secretary William Hague should have been far more vocal against Israeli action in Lebanon. ‘To criticise the Israeli government is to be thought anti- Semitic. I’m not anti-Semitic, I just think the Israelis have behaved abominably... In the end, you’ve got to negotiate with Syria and Iran to try and get alongside.’

In 1982, when it was difficult to get alongside the Argentines, who had invaded the Falkland Islands, Carrington resigned as Foreign Secretary immediately. It was widely seen as honourable. ‘I think it was very necessary. There had to be a scapegoat. You can’t go to war... if the country isn’t united. But I don’t feel I got it wrong.’ Although Margaret Thatcher tried to persuade Carrington to stay, she admitted his resignation made things easier for her. Previously, they had been ‘an effective combination’ - he had unrivalled experience while she was finding her feet, and he maximised his influence by limiting himself to foreign affairs. ‘On the whole the chemistry with her wasn’t bad. I’m fond of Margaret. I didn’t really agree with her about a lot of things but she quite enjoys a good squabble.’ Douglas Hurd claims that Thatcher was once ‘firmly excluded from the gentlemen’s conclave over port’ after dinner at Bledlow, but Lord Carrington doesn’t recall being quite so provocative: ‘I think that’s rather unlikely. I had more sense than that!’

Ted Heath was perhaps more to his taste. ‘He was difficult and grumpy but he could be terribly kind.

In many ways he was a very admirable person. Very lonely, I think. We had lunch with him just before he died. He was a sad person, really.’ Carrington treasures a memory of the time in 1971 when Heath met the Prime Minister of Malta, Dom Mintoff, listening with considerable patience and kindness. Shortly afterwards, Mintoff unexpectedly arranged to meet his estranged wife chez Heath to talk over their marital problems. Carrington was nonplussed. ‘I admired Ted’s fine qualities but I was sceptical about his suitability as a reconciliation counsellor of the Mintoffs over tea at Chequers.’ But Heath was amused, and handled it with aplomb. ‘They went off in the same car together, anyway,’ he assured Carrington.

Carrington’s own 64-year marriage to Iona has been a great deal more successful. She uncomplainingly uprooted herself and their young family when he was posted abroad, and often travelled with him: ‘It was expected, in those days,’ she says. ‘It’s only recently the press have objected to a wife going too.’ Lady Carrington has had to put up with an awful lot, according to her husband.

‘One couldn’t have done any of this without her... And she could tell me when I was being stupid!’ Now they are passionate horticulturalists with a beautiful garden, sometimes open for charity, which they created more than thirty years ago.

His other artistic love is opera. He can’t sing or play an instrument, but a fellow pupil in his house at Eton was Humphrey Lyttelton, who ‘learnt to play his trumpet in the room below me’. Carrington is actively involved with Garsington, the annual open-air opera festival near Oxford. Established by Leonard Ingrams 17 years ago, Garsington now has an international reputation and has launched the careers of Orla Boylan and Riccardo Novaro. The Carringtons happened to be with Ingrams only a few hours before his sudden death last year.

A Foundation was set up in his memory, and Carrington is doing his bit to help raise £3 million, which will secure Garsington’s future and provide bursaries for promising artists. So far, £400,000 has been raised. ‘Asking people for money is embarrassing. I’m not very good at it’ - but Garsington thinks otherwise. ‘He is undoubtedly the most alert, lively and active member we have,’ says the Head of Development. ‘If you give him a problem he’ll come up with a solution - almost in a military way, with great precision, good humour and tremendous energy. He doesn’t like to be defeated.’

A steely determination to succeed and be in control is smoothed by great charm, intelligence and sensitivity. Hurd described Carrington’s wit and half- pretended pessimism as personal weapons, but Carrington himself thinks people need to be ‘stroked’ - in the gentler sense of the word. His modus vivendi is diplomacy, courtesy and communication.

Carrington heads a large family, with five great-grandchildren. None of his descendants has gone into politics, although ‘they’re quite good at grumbling!’ His own grumble is that there’s no brake on a government with a large majority. ‘The Commons won’t be, because they don’t want to lose their seats; the Lords is feeble; the Cabinet’s no good because the PM can sack them; the Conservative Party was hopeless, and the only opposition is the media... It doesn’t matter what they do about reform of the Lords - they’ve made such a mess of it.’ The first Lord Carrington, Robert Smith, was a banker who gave financial advice to his prime minister, William Pitt the Younger. Pitt elevated him to the Lords, and it is said that Smith later helped bail Pitt out of his personal debts. Carrington doesn’t believe this, and says his great-great-grandfather was a man of‘utter integrity’. He has a simple solution to the current loans-for-peerages scandal. ‘The easiest way of stopping people buying peerages is to stop them calling themselves Lord. Call them senators or something.’

As he sits with a snoozing Edward Heath in his lap, the sixth Baron Carrington is philosophical about the future. ‘During the three-day week [1974] and all that, one really thought the country was on the verge of some kind of catastrophe...

But nothing is ever as awful as it seems to be at the time. It’s quite a good lesson.’