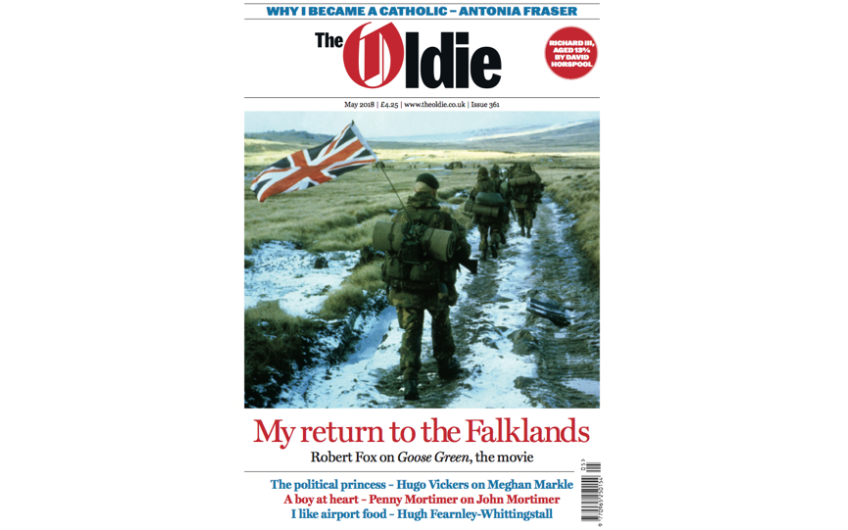 Robert Fox goes back to the islands as an adviser on ‘Goose Green’, the first movie about the conflict – where he was one of only two journalists embedded with British forces at the Battle of Goose Green

Meghan Markle, the first royal bride to address the UN, will be a revolutionary figure

Why I became a Catholic – Antonia Fraser

As her new book about Catholic Emancipation is published, the historian recalls her teenage conversion

A boy at heart – Penny Mortimer on John Mortimer

John Mortimer would have been 95 this year. His widow recalls her enchanting, hilarious, annoying husband

The chef has travelled the globe in search of local delights, but he can’t resist the charms of airport grub

Our history columnist has discovered what the hunchbacked king got up to in his troubled, teenage years

PLUS Gyles Brandreth on groping Marlene Dietrich, Rachel Johnson on her Desert Island Discs and Giles Wood on his loathing of English delicatessens

Listen to the podcasts, recorded to supplement the issue. Harry Mount interviews Tom Hodgkinson, our Town Mouse columnist and cofounder of the Idler empire, about eminent Victorians, town vs country, and the key to a harmonious, idling existence. Listen to their conversation here.

Plus, an exclusive recording to supplement our cover feature, that will be available to listen to with the app version of the magazine. Or from Wednesday next week. Robert Fox discusses his sombre return to the Falklands to advise on a new feature film about the Battle of Goose Green – where he was one of only two journalists embedded with British forces. In conversation with Harry Mount.