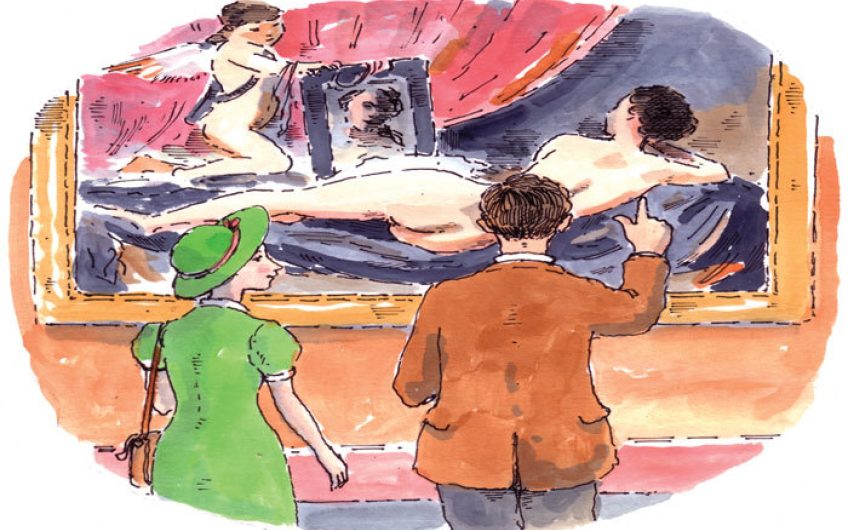 In 1938 I had trouble passing my school certificate. Unlike my clever sisters and brother, there was no question of university for me. My parents were concerned about ‘what to do with Ursula?’ Instead, I was sent to the Constance Spry Flower School. My mother’s decision was law.

So I went to a boarding house in Earls Court where one of the lodgers had a great influence on me. His Australian accent set him apart; as well as that he was an artist, which gave him mystique.

The lodgers sat at designated tables in the dining-room. I sat with two other student girls. Mr Brown sat alone at a small table just inside the door. He often arrived late and left early, missing pudding. He loved theatre, which explained his absence.

One evening he stood in the hall, warming his hands at the radiator. I joined him. We discussed the recent London fogs, which were new to both of us.

‘So you’re a country girl, are you?’ I was pleased to be seen in that light. I had been brought up in greenbelt land near Guildford. London was a shock: dirty, noisy, crowded – and now fog.

On rare occasions Mr Brown stayed for coffee served in the drawing-room after supper. He liked to pass the small cups and saucers around. This custom was typically English, he thought. One evening he and I were alone after the rest had left. I was on the sofa opposite him.

‘I could paint you, and enter it for the Academy,’ he said. I glowed. I wasn’t used to compliments. I knew nothing about the Academy. Where and what was it? He said he would like to show me some pictures and suggested meeting in the National Gallery.

I got lost, taking the wrong bus and arriving late. There he was at the top of the steps. We went in. I had dressed with care but he ignored my green hat with the big brim the same colour as my dress; his only concern was the paintings on the walls. He pointed, he explained. Would he suggest supper later – or a cup of tea?

He didn’t but paid my fare back to Earls Court (threepence). On the way he offered to teach me Italian, the language of the operas he loved. I learnt three ways of saying goodbye: addio, arrivederci, arrivederla. With my consistently absent parents, ‘goodbyes’ had haunted me all my life.

Later he said he couldn’t look at me without longing for a pencil – if he could have me for a year, he might knock some sense into me. I said nothing.

He played the piano one evening in the sitting room while he sang ‘Your Tiny Hand Is Frozen’. Then he sat by me, taking my hand. The owner of the establishment peered around the door, not speaking, leaving the door open. ‘Checking on us,’ he said.

One day his table was bare. He was unwell, they said. He was in his room, in bed, looking flushed. ‘Come in, Ursula mia.’ I offered to read to him. We both loved Hans Andersen. I had the book. I went to my room to fetch it.

The owner was outside. ‘You mustn’t go into Mr Brown’s room. We are responsible. Your mother would not approve.’ Of course she wouldn’t – she would be horrified. I went back and told him I couldn’t come in. He looked angry as he put out his hand. ‘Come here, Ursula.’ I wanted to touch, to hug, to make him better any way he chose. Instead, I went back to put Hans Andersen away.

The flower school closed that summer. No more making wreaths, bouquets and floral sprays for me. I joined my family for the usual seaside holiday in Swanage.

Hitler was causing concern in Europe. Never mind him, my concern was getting back to Mr Brown. Instead, war was declared and life was never the same. I collected my clothes and books from the house in Earls Court, praying that he might be there. He wasn’t.

Before I joined the Women’ Royal Naval Service, I learnt to type in Guildford. I loved others, but nothing compared with the obsession I had for Mr Brown. I never saw him again.

He returned to Australia. He wrote describing his sea voyage on the Orontes, where he’d written and produced a pantomime to amuse the children on board. ‘So poor Cinderella was left alone, sitting sadly on the cold grey stone. Only the mice with grey green eyes watch Cinderella as she softly cries.’

My mother died in 1963. When lying ill, she said: ‘You could write. I feel it.’ She might not have liked what I do but her words felt like a blessing.

Both she and Vincent Brown influenced me in different ways. Like lodestars, they lit my path.