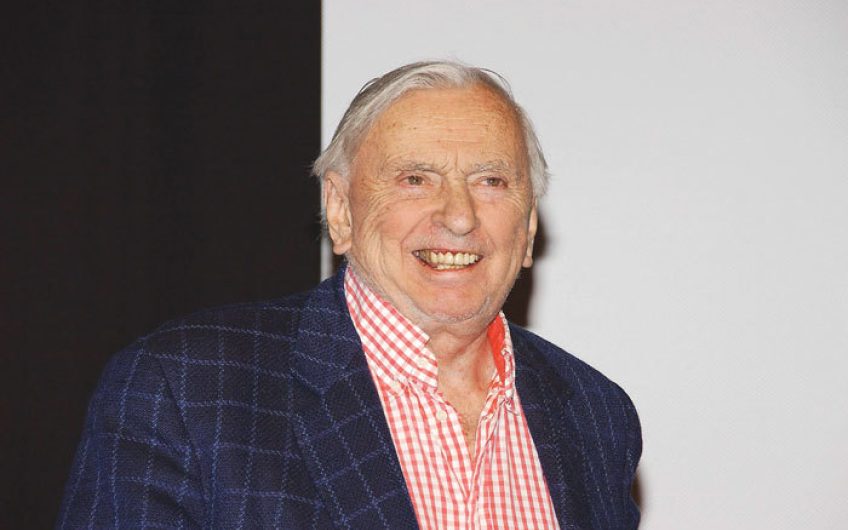 Gore Vidal, an irascible drunk suffering from dementia, died at his house in the Hollywood Hills on 31st July 2012, aged 86. Howard Austen, his partner since 1950, had died in 2003. Vidal left 37 million dollars to Harvard University and nothing to his family of half-siblings and their children, who are contesting the will on the grounds that he was mentally incompetent when the codicil leaving everything to Harvard was drafted. He enjoyed being contentious when he was alive, and seems to have made sure that the contention would continue after his death.

My own memories of him are mostly pleasant. I remember a dinner given by my publisher friend Tom Rosenthal, and his wife, Ann, for Gore Vidal and Howard Austen, myself and my partner, David Cook, and Lynn Barber of the Sunday Times. During the first course there was a power cut. Candles were found but the meal could not proceed because there was no power in the kitchen. So Howard sang to us – sentimental songs from the Fifties – while Gore beat time on the dining table with his fist. After forty minutes the lights came back on.

How had I come to meet Gore Vidal? I had reviewed his third novel, The City and the Pillar, for the Oxford student magazine, the Isis, under the heading ‘Kiss Me Hot-Lips: I’m Asbestos’, and his British publisher sent a copy of the review to him. He was amused, and wrote to me, and when in 1952–53 I spent a year in the USA as a Fulbright Scholar,

I visited him at his house on the Hudson River. He was a year younger than me, but he knew more, had seen more, done more, he gave advice like a friendly uncle, and from then on it became a joke between us that he was my Uncle Gore.

After Oxford I came to London, worked in journalism, then in advertising, published novels of my own, wrote for television and then for the theatre. My Uncle Gore and I kept in touch by letter and whenever he came to London he would stay at the Connaught and we would lunch together. I reviewed his novel, Julian, for one of the posh Sundays and earned his reproach. ‘Who needs a considered judgement?’ he said. ‘What’s wrong with unqualified praise?’

He came for a longer stay and rented a house in Belgravia, where there was a butler and I was given oysters for dinner. I had never eaten an oyster before and stared at my plate, wondering how to begin. ‘Drench them in Tabasco,’ he advised. ‘And take lots of brown bread and butter.’ He gave a party where I met Paul Newman, and a birthday party at the Ritz attended by Princess Margaret, whom he introduced to David, whose film Walter had been part of the launch of Channel 4. David said to her, ‘The last time I saw you was when you came to watch a rehearsal at RADA when I was a student. You haven’t changed a bit,’ and she gave a great grin, and said, ‘Flattery will get you everywhere.’

I have not kept his letters or copies of my own: neither of us was writing for posterity. He invited me to visit him at his villa in Italy, high on the cliffs above the Gulf of Salerno, but I never went. And my last memory of him is the least pleasant. Instead of lunch at the Connaught I suggested he should call at my flat in South Kensington and I would take him for a meal at the Chanterelle in Old Brompton Road, which used to be owned by another novelist, Walter Baxter, who wrote Look Down in Mercy. I invited a couple of friends – a director of opera and an academic who, I vaguely remembered, had met Gore at a festival he had run somewhere in the south of Italy.

The opera director cried off at the last moment. The academic arrived early, beer-drunk after carousing with his students. Gore arrived late, gin-drunk. We walked to the restaurant and sat at a table at the back. The food was good and wine flowed freely. The academic grew more and more obstreperous, downright rude, called Gore a has-been, a second-rate writer and a third-rate mind. Something unpleasant must have happened at that festival, and I had not been warned. ‘Time for you to go,’ I said, and walked the academic to the door and into the street. ‘Can you get home safely?’

‘I’m not going home. I’m going to Heaven.’ This was not a reference to life hereafter. Heaven was a gay night-club.

I returned to Gore at the table. He fancied a liqueur. Then I walked him back to South Kensington station and put him in a taxi. That was our last meeting. No more letters. I had lost an uncle.

After the sun, the rain – and the petrichor!