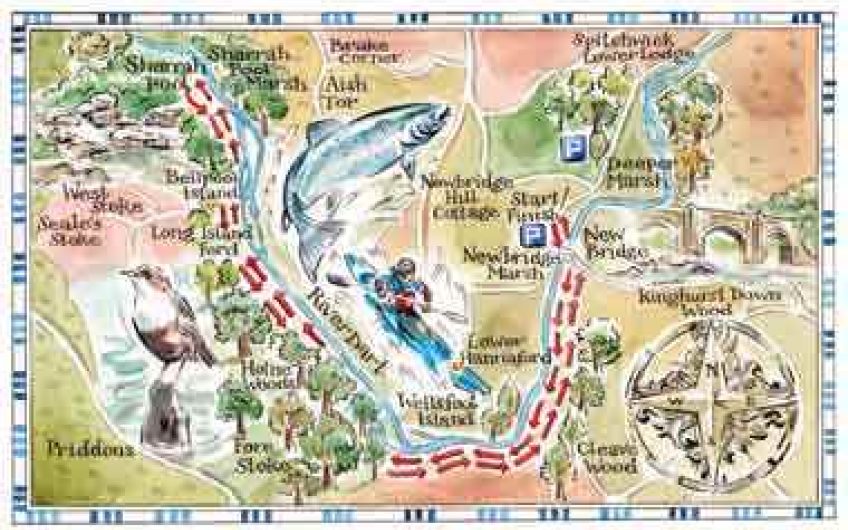 Park at Newbridge car park, TQ13 7NT (£2 all day; arrive before 11am to find a place). Cross the old bridge, turn right onto riverside path that follows the western bank of the Dart, upstream. Sharrah Pools are beyond the waterfall, two miles from the car park. Walking quite rough and steep at times. OS Map: OL28 Dartmoor
View Full Size
1
of 1

It was a Sunday in the depths of the summer holidays and the children were being dragged on a wholesome excursion.

I tried to combat their mutiny by warning them that their whinges could appear, in writing, in The Oldie.

‘Write about a walk? That’s the most boring thing ever,’ scoffed Milly, eight.

The children did not yet know that this was no common-or-garden country park excursion, however – this was the prince of walks.

A wander from the (very old) Newbridge in Dartmoor, through ancient woods in the steep valley gouged by the River Dart, one of the most charismatic bodies of water in the country.

Its name derived from the Celtic for ‘the river where oak trees grow’, the Dart’s water was ‘liquid dark’, wrote Alice Oswald in her epic poem Dart.

It may be barely 20 miles long but the Dart collects the outpourings of some of England’s wettest moors and hurtles them downhill, along with kayaks, salmon, froth and spume. Walking beside this river after a downpour, as we were, was like trotting with a tiger, or strolling beside a phalanx of speeding F1 racers. The Dart cleared its throat, roared and threatened to pounce but mostly just pounded every rock foolish enough to lie in its path into smooth, round submission.

The children were not submitting to this river’s mighty charisma as we walked through sessile oaks dripping with the memory of rain, a woodland filled with as many horizontals as verticals, and mossy logs resembling amputated green limbs.

The path teased the river, drawing close and darting away up the river cliff. The Dart’s peaty water was the colour of crème brûlée as it dived into a hole in the rock. It swept over round stones looking like slicked-back hair.

Limbs flopped as though they were discarded puppets.

I told them we would walk to find ‘the fairy pool’ which attracted the kind of derision that children of my generation reserved for a particularly eager-to-please supply teacher. I offered £1 for the first one to spot a dipper bobbing beside the river, its white bib reminiscent of an obsequious waiter. But the incentive failed to elicit any enthusiasm, and I soon won my own prize.

Incentives are unpredictable things. Winning encouragement was eventually supplied by another walker, who told us that a sausage dog named Bruno was waiting by ‘the pool’ and would be eager to meet our lockdown pup, Betty. The children became animated for the first time that morning.

At last we reached the pools, to be greeted by an enthusiastic Bruno and some children who were having the loveliest time in the frothy, bubbly, peaty-orange Dart. Our children forgot to moan and we adults made doubly sure to obliterate any further whining by submerging ourselves in the river and filling our ears with water.

Tingling and beaming with the magic of cold water, we turned for the easy trot home. ‘Why will the walk back feel shorter?’ asked Ted, suspiciously.

‘Because it always does,’ I said.

At last, the children ran ahead, swinging coats, chattering, their imagination switched on by the oaks’ fabulous beards of moss and lichen and the whole spirit of the woods by the water. ‘I can hear a giant running his bath,’ said Ted, as the Dart raged beside us.

It felt as though the giant picked us up and flung us home; we reached the car park so quickly. I like to think I resisted the urge to gloat to the children about the unbearable rightness of being Dad – about the wonders of this walk, and how they’d enjoyed it in the end – but I didn’t quite manage it.

The US Mail keeps working in lockdown