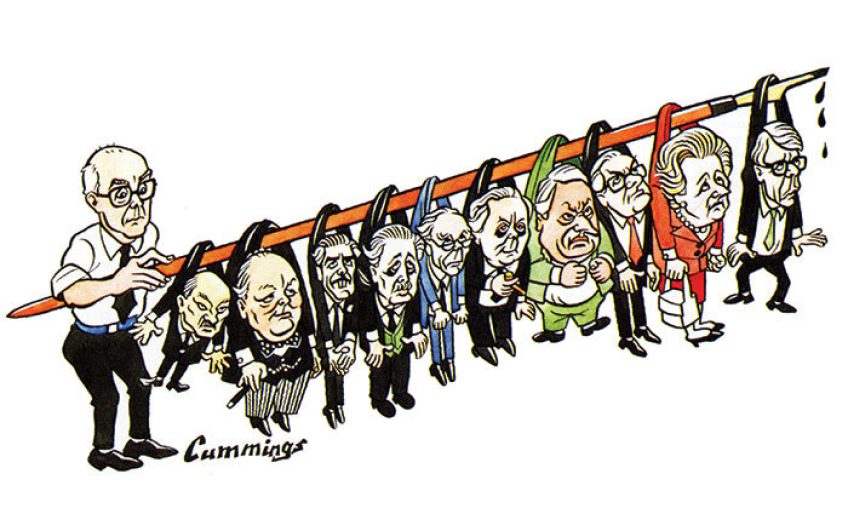 You may well wonder what masochistic impulse has made me chronicle the actions of a collection of people, most of whom have conducted this country to its present sorry state. The answer is, I wanted to be a cartoonist from childhood, and my political journalist father, A J Cummings of the News Chronicle, fired my enthusiasm.

Michael Foot was my first editor, for whom I drew cartoons for Tribune. After six of these cartoons were published, I was approached by a member of his staff who said his colleagues were very worried because the cartoons attacking Stalin and the Soviets were so right-wing. He couldn’t understand ‘what had got into Michael Foot’ in publishing them. Not exactly the Michael Foot of the ludicrous allegations of him being a KGB agent!

After this episode I wrote to Lord Beaverbrook asking for a job. He sent me back a cordial note saying he was ‘just an old man who now had nothing to do with the papers and spent his days in the sun’. But he gave me an appointment to see the editor of the Daily Express, Arthur Christiansen. He took me on, and thereafter I stayed on the Express for 41 years and a succession of twelve stimulating editors. I was also taken on by the redoubtable John Junor of the Sunday Express. Like everybody in the newspaper business, I had many ups and downs. One particular ‘down’ was when the unions stopped the Scottish Daily Express from publication because they didn’t like the political content of a cartoon.

Lord Beaverbrook occasionally didn’t like the content of my cartoons, but he never stopped one being published. Though once he asked me to stop caricaturing de Gaulle for a while. I’d recently done a particularly critical drawing about the General which so incensed the French government that they lodged an official protest from the Quai d’Orsay. They were suspicious that Harold Macmillan was masterminding an anti-French campaign in revenge for de Gaulle’s ‘No!’ to Britain joining the Common Market.

Winston Churchill, however, was a politician who did like my political message when I poked fun at Attlee’s socialist government. I’d invented a spoof Hampstead-style Labour MP (called ‘Zilliboy Shinbag’) who every day made a fool of the socialists by making foot-in-the-mouth statements – a sort of left-wing John Gummer. Beaverbrook told me I was Churchill’s favourite cartoonist, and he invited me to dinner to meet the great man. Churchill gave me a searching interrogation on how I did my job. As he was so keen on painting, I wondered if he’d be tempted to try his hand at caricature.

A politician who was sensitive to being caricatured was the Leader of the Labour Party, Hugh Gaitskell. At a party conference he once approached me with a charming smile and outstretched hand, saying I was the only person in a group of journalists he did not know. When I told him my name, his smile was extinguished, he withdrew his hand, turned his back and abruptly marched upstairs to his hotel bedroom.

By contrast, socialist politician Emanuel Shinwell told me, ‘My boy, however much you irritate a politician by lampooning him in a cartoon, he’ll be much more irritated if you leave him out of your cartoons!’

Another super-controversial politician was Enoch Powell. When he made his ‘rivers of blood’ speech attacking immigration, I drew a cartoon suggesting that what he said was what most people were thinking. I drew him being accused in the High Court of the crime of ‘telling the truth’. I received over 200 letters from readers congratulating me on the cartoon.

However, some months later, Powell made a speech suggesting repatriation for immigrants. For this, I did a cartoon showing Macmillan being repatriated to his native Scotland and the Royal Family being repatriated to its origins in Germany. This cartoon provoked over 100 letters from angry readers because I dared to mock the words of St Enoch.

In the course of their careers cartoonists often invent a character. Many years ago an election campaign started up, and Arthur Christiansen told me that everybody was worried about rising prices, so I must invent a figure symbolising them. I conjured up an immensely tall, thin, sinister figure called ‘Mr Rising Price’. This was reproduced from the bottom to the topmost part of the big Daily Express broadsheet page. It was carried on every day in ever-expanding guises, and was instantly a terrific success, capturing the mood of the readers. It continued to appear for many years and is still referred to.

The irony is that when I invented Mr Rising Price, inflation was minute compared with the hyper-inflation launched by Macmillan, Heath, Lawson and the rest.

People often say to me that today is a good time for my profession because there’s so much to cartoon about. Unfortunately, the world is so lunatic that it’s going way beyond exaggeration and satire. So many British institutions, groups, politicians and individuals have abandoned common sense to embrace the idiocies of political correctness, trendy technology and other follies. They are like the lunatic asylum inmates who won’t sit down because they believe they have glass bottoms.

Even the great satirist Malcolm Muggeridge, were he still alive, might conceivably have been reduced to silence contemplating such an embarrassment of riches of idiocy. In such an environment cartoonists can also feel slightly redundant.