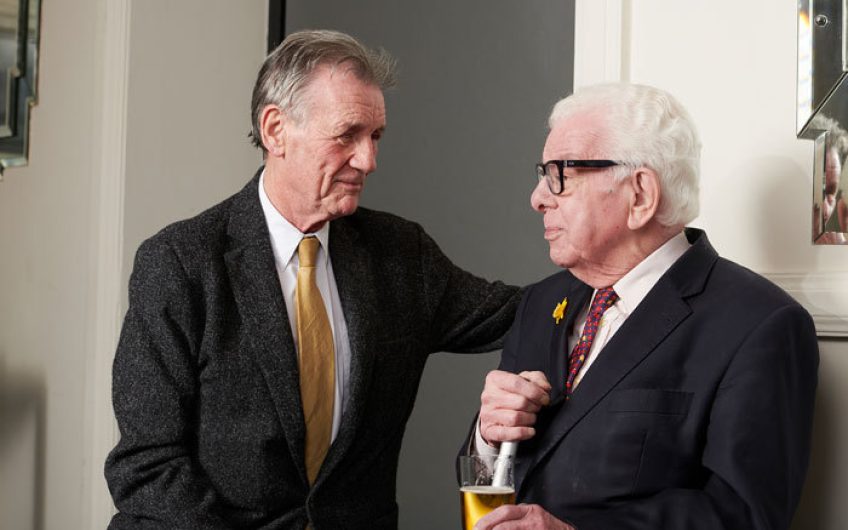 The two Yorkshiremen: Michael Palin and Barry Cryer at an Oldie lunch, 2020. Picture by Neil Spence
View Full Size
1
of 1

Sir Michael – as he doesn’t ask to be called – saw Jones just before he died in January 2020, suffering from dementia, aged 77.

‘He clearly was very unwell,’ says Palin. ‘But I talked to him like I always did. I wouldn’t accept the dementia had shut his understanding up. It had shut his communication up.’

And so Palin suggested to Alison, Jones’s first wife, who was by his side, that they should sing one of the songs he’d written with Jones to get some reaction.

‘We sang Every Sperm is Sacred from The Meaning of Life.’ he says. ‘Unfortunately we couldn’t remember all the words. So, if Terry was hearing me at all then, he just heard what a complete shower we were.’

Jones was asleep at the time but he did have flashes of memory a year before, when Palin read to him from a book they’d written together, Dr Fegg’s Encyclopedia of all World Knowledge.

‘Rather like listening to a piece of music you know, he immediately reacted and laughed at two or three occasions,’ says Palin. ‘I hadn’t heard him laugh for such a long time. The great thing was, he laughed only at the bits he’d written. He’s truly defeated the dementia there.’

Palin, 78, first met Jones over 50 years ago at Oxford, where Jones was in the year above him.

‘He was quite a charismatic figure – very dark and rather brooding,’ he says. ‘I was slightly in awe of him. I then found this dark, intense, brooding Welshman actually had a terrific sense of humour.

‘He would use Welshness as an excuse when he got into strong, passionate arguments and went slightly ballistic. He’d say, “That’s because I’m Welsh and the Welsh have been ignored for centuries.” Cleese loved that – a red rag to a bull.’

When Monty Python began in 1969, Palin forged an alliance with his old Oxford friend, Terry Jones, while the former Cambridge undergraduates, John Cleese and Graham Chapman, banded together.

‘It was quite a significant difference oddly,’ says Palin. ‘I don’t know why there should be. They were more interested in words than ideas. Whereas Terry and myself – and Terry Gilliam, when he joined – were more interested in abstract ideas, surrealism, images, John and Graham were the consummate sketchwriters; brilliant work like the Dead Parrot and the Cheese Shop.

‘They weren’t so interested in how things looked and how ideas developed – which was very much Terry’s thing. He was very keen on film.’

The differences between the Oxford duo and the Cambridge duo produced some tension. ‘Generally it was creative tension. John would tease the Oxford group and we’d retort that he had no soul. It was very silly – but very much part of why Python worked. It all came from different directions.’

It helped, too, that the Pythons came from different parts of Britain. Jones was born in Colwyn Bay. Palin, born in Sheffield, thinks of himself as a Yorkshireman, despite living in north London for half a century. In his admiring introduction to Leeds-born Barry Cryer’s Comedy Scrapbook, Palin writes, 'In case you think that money might have passed hands to get me to write this, I must of course remind you that Barry and I are both Yorkshiremen and fully aware that flattery is not tax deductible.'

(Palin first met the late, great Barry Cryer in a rehearsal room in 1965, working together on The Frost Report, David Frost's satirical TV show. They were happily reunited in January 2020 at an Oldie lunch.)

Palin likes the insight by TV presenter and writer Barry Took. ‘Python was all provincials,’ Took told Palin. ‘None of you were metropolitans.’

This meant, Palin thinks, that they had something to prove. Monty Python weren’t quite fighting against the Establishment. But, because they came from outside London, Palin says, ‘You had to work a bit harder. And you had that feeling that London had to be fought against – there was a certain smugness and complacency there. We were lads from Weston-super-Mare [John Cleese] and Sheffield – and Esher [where Terry Jones grew up].’

Palin is also mourning the death of the musician Neil Innes, who died in December 2019, aged 75. Innes, who wrote songs and sketches for – and acted in – Monty Python, was often described as the seventh Python.

Innes was, then, like Palin, a nice man. That nice label is an albatross round Palin’s neck.

‘I slightly object to the nice tag,’ he says. ‘Nice is such a wet word really. I was in a way the most conciliatory Python. I brought people together, settled arguments sometimes.

‘Maggie Smith once described me as a saint, the sort of good person who, if he went and strangled a baby in the street, people would say the baby attacked him first.’

Palin is now working on a fourth volume of his diaries, covering the years 1999-2009. His last globe-trotting tour, to North Korea, was the subject of a Channel 5 series and his new book, North Korea Journal.

The people’s devotion to the ruling Kim dynasty seemed genuine.

‘Their statues looked like the people you see in Waitrose on Saturday morning. And yet they inspire the enormous devotion. I think largely it is a real devotion. The regime isn’t shaky. It’s quite solid.’

Palin looks in rude health. He has, though, just recovered from a heart operation.

‘You realise you’re vulnerable,’ he says. ‘In some arrogant way, I thought, I’m fine. I run and I take exercise and I have a good diet. I’m going to live to 150.

‘And then suddenly you look under the bonnet and there are things not quite attached to other things. Someone’s been in there after 76 years and had a look round and put in various repaired valves.

‘My father used to do repairs to the car. Within a couple of weeks, they’d fall apart. So never say everything’s all right.’

Palin had been breathless and tired. His heart was working at 70 per cent rather than 100 per cent before the operation at St Bartholomew’s Hospital, Smithfield. By coincidence, while he was there, his son Will Palin (Michael has three children by his wife of 56 years, Helen) was running the £22m restoration of St Bartholomew’s to celebrate its 900th birthday, including the marvellous murals by William Hogarth.

‘Will had just started,’ he says. ‘I was taken out to see the Hogarths by one of the nurses, with all my tubes and so on, to see this hall that Will is helping to restore.’

Fit and well once more, Palin is now embarking on another TV tour of a top-secret exotic destination. The nice workaholic isn’t going to retire any time soon.