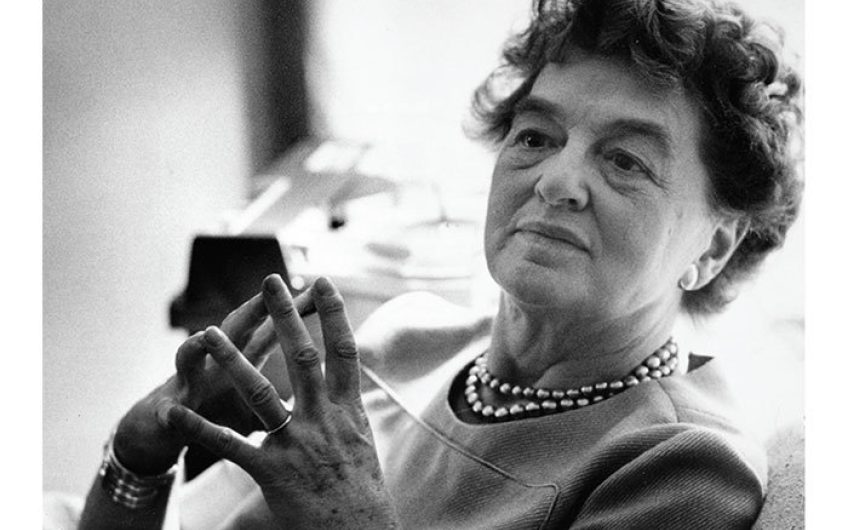 You should never use the words “With love” in a dedication unless you mean it,’ the witchy, keen-eyed woman with a flounce of curly white hair and a jangle of silver bangles up each wrist told me after I’d inscribed the words in a novel of mine I’d given her. Miss P L (‘Mary Poppins’) Travers was right. I didn’t love her. But that was her life-long unrealistic hope – for a secure, unconditional, untroubled love. Instead, for lack of this, she created Mary Poppins and a million-dollar fortune. But she wasn’t really happy with her success. Pamela was a contrary, divided, hypochondriacal woman, and Mary Poppins was her cure-all, magic nanny – a wonderful tonic for millions of children, but one who never quite cured her creator.

Pamela was a friend of my grandfather and she adopted my younger brother Camillus in 1940. He was one of two twins abandoned by our parents; she picked him up in Dublin from my grandfather’s house. My grandfather, having been landed with me and my sister previously, was anxious to get shot of the twins as soon as possible, so when Pamela arrived in the nursery and saw the two tiny babies, he said to her, like a grocer, ‘Take two, they’re small.’ She didn’t – she went away and had both babies’ horoscopes prepared by an astrologer in California, who recommended she take Camillus and not Anthony. Pamela was very big on gurus. This was tough on Anthony, who was abandoned once more to my mother’s impoverished parents in Ireland.

Pamela was also very big on doubles, believing in the essential duality of life. But her own essential quest was simpler: she was always looking for a Mr Banks, a solid but sensitive and engaging man like her creation, the banker of Cherry Tree Lane – surely an idealised version of her own unsatisfactory father. Travers Goff was a small-town bank manager in rural Australia before he was demoted to bank clerk; he had abandoned Pamela when she was eight, dying after a long association with the bottle.

If Mr Banks was a fanciful version of her father, then Mary Poppins was a whimsical, bossy reflection of Pamela herself. Pamela had an unhappy, disrupted childhood. And so she set out in her life, and in her Mary Poppins fantasies, to set her two worlds to rights: to create a magic childhood in the books and, with the help of her gurus, to find a happy life in reality. It was a tall order. She succeeded wonderfully in the first quest but not the second. She found the real world pretty awful. And so she further immersed herself in fairytales, myths, dodgy health cures and Jungian blather – encouraged by a wild assortment of charlatans, most notably the caviar-guzzling, Armagnac-tippling Russian mystic Gurdjieff in his exotic Paris flat, who told her she should have a daily enema and took her money for his advice.

In the late Fifties she asked me to stay in her Chelsea house to set Camillus to rights. He had become a difficult youth – not surprising, since she had never told him who his real parents were, saying she was his mother and his father had died of a fever in the colonies. This lie had been uncovered in dramatic circumstances shortly before my arrival, when Anthony, intent on finding his twin brother, finally discovered Pamela’s address and turned up on her doorstep. Camillus opened the door. ‘I’m your twin brother,’ Anthony told him. Sensation!

Truth never had a firm root in Pamela’s nature. First and foremost she was a storyteller, a fantasist to the tip of Mary Poppins’s parrot-headed umbrella. Like Carroll with Alice and Barrie with Peter Pan, Pamela found herself in possession of a universal figure, a magic nanny who has roused the wonder and delight of generations of children. But Pamela had none of the nannying and mothering skills of her creation. Rather the opposite. Despite her airy-fairy fantasies, Pamela was a steely, self-centred, very controlling woman. She got what she wanted – an oven-fresh, ready-packed baby boy. Being without a secure family background of her own, husbandless and loverless, she wanted to create a real family for herself. Just as she had imagined the Banks family, so she would invent a conveniently dead father for her new off-the-shelf son, and motherhood for herself. And if not actual motherhood, then she would be the magic nanny: she could be Mary Poppins in reality. The victim in all this was Camillus, who wasn’t a character in a fairytale.

Pamela asked me to stay with her, in the hope that in meeting his more secure elder brother, Camillus might steady himself. I don’t know that I helped him much, for I saw very little of him in the three weeks I stayed with them. I was working all day in a bookshop, and Camillus was usually out gambling all night. Of an evening, in the hope that Camillus might join us, Pamela and I sat in her first-floor drawing-room chatting over drinks that she mixed from a cupboard on the landing: fifty-fifty, sweet and dry vermouth.

Camillus made quite a success of his gambling. In the small hours one morning I heard a to-do in the hall. Looking down the stairwell I saw Camillus gesticulating, then saying to Pamela, ‘You think I don’t apply myself, don’t earn any money!’ and then throwing a snowfall of old white five-pound notes in the air.

Camillus was far better off in his adoption by Pamela than he would have been with his real parents or grandparents. With her patience, love, and money, she gave him many practical and priceless things that he would never otherwise have had. I remember looking at this small, fragile woman and thinking, ‘You’re a tough one all right’. But she was a real artist, and she had the application. She lived to be ninety-six and left over two million pounds. Mary Poppins and Pamela Travers: airy-fairy and down to earth – the same little lady of Cherry Tree Lane.