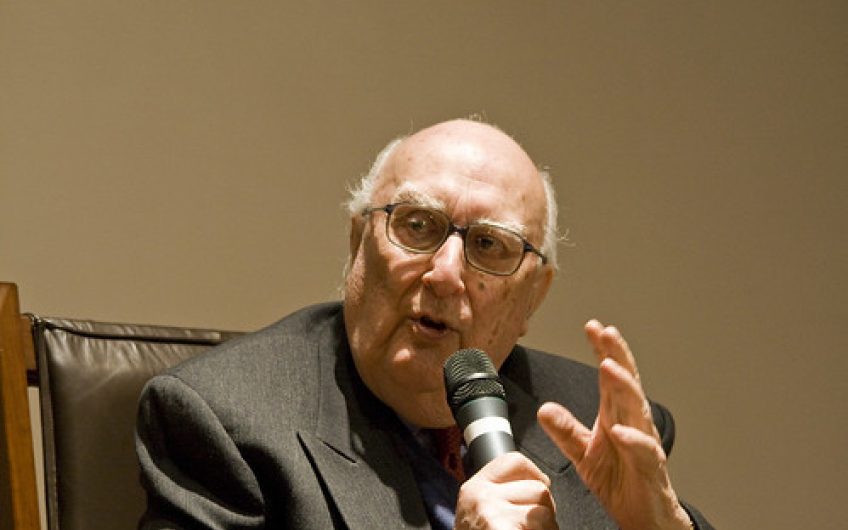 "Andrea Camilleri a Luino" by Premio Chiara is licensed under CC BY 2.0
View Full Size
1
of 1

In recent times no two people have done more to change the image of Sicily – and for the better – than the late Andrea Camilleri, who died this week at the age of 93, and his alter ego, creation, and nemesis, Commissario Salvo Montalbano.

At the age of 68, after a successful life as a theatre, television and film director, Andrea Camilleri produced the first of his 27 novellas on the life and crimes investigated by Montalbano and his team in the sleepy southern port of Vigata. Since then, some 30 million copies of the stories have been sold worldwide, and on television the adventures have been portrayed in 32 countries.

Montalbano has become one of the great detectives whose influence reaches well beyond the realms of fiction. He has become a literary and folklore archetype – a partner in and out of crime of Sherlock Holmes and Philip Marlowe. Holmes and Marlowe have been played on stage, cinema and television by a host of brilliant actors, from Basil Rathbone to Humphrey Bogart and Robert Mitchum. In the case of Montalbano, one actor, the great Luca Zingaretti, has captured the role for ever.

He and the brilliant light-touch director Alberto Sironi have made the ‘Inspector Montalbano’ television series a global brand – from the opening shots of the bald-pated Montalbano ploughing through the waves off his Lido di Ragusa beach house to aerial top shots of Ragusa itself and its province. The series has portrayed southern Sicily in all its glory: stunning baroque palaces and churches, crumbling rustic forts and farmhouses, burnt hills swathed with vines and olives in what Goethe described as “a desert of fertility.”

Within a year of two of the airing of the first episodes, the visitors started pouring in. Tourism in Sicily went up more than forty per cent in two years, and the island is now one of the top holiday destinations in Europe, particularly for Brits in search of the magic of Montalbano.

Baroque towns that were in danger of falling down only a few years back – Modica, Scicli, Noto and Palazzuolo Accredi, not forgetting Ragusa itself – are now main destinations for visitors, including a delightful Oldie tour three years ago.

“You may remember what these places were like when you came here fifty years ago,” I was told recently by Alessandro the genial manager at ‘L’Eremo’, an enchanting family hotel converted from a medieval priory, just south of Ragusa.

“Take Vittoria, across the valley from here. It was, frankly, a bit of a dump – now it has some of the best restaurants and food in Italy. And the wine is not bad, really world class in fact. A lot of this is down to the Montalbano effect – it has changed things completely.

“You must pop up to Room 11 – it's our showpiece. The first murder in the first Montalbano series was filmed there!”

Food forms a baseline rhythm on the screen and in the books. Montalbano is a true ‘buongustaio’ – always dining in silence whenever he can, the hapless fidanzata, an architect and useless cook from Genoa, notwithstanding. Two of the favourites are the rice and saffron pyramids, ‘arancini’, and the extraordinary cream-puff cones, ‘canolli.’

Bill Nott, our wine critic, gave a brilliant disquisition on the Montalbano diet on the Oldie tour. It may or may not be down to him, but arancini now occur on menus from Hackney to Halifax.

Canolli form the very public vice of Dottore Pasquano, the pathologist in all the episodes till recently. He is played by Marcello Perracchio, a true son of Ragusa, who died in 2017 at 79. Most of the supporting cast in most episodes are Sicilians, playing brilliant vignettes.

Sironi, Zingaretti and their team set up in Ragusa for months, and trawl clubs and theatre groups high and low for talent. The ‘Sicilianita’ of the whole project creates so much of the magic. The books themselves are written partly in Sicilian and partly in Italian, which means the subtitles struggle with accurate translation. Sicilian jokes are sharp and brutally realistic – even the swearing has a crude lyricism – though Pasquano often resorts to the universal ‘stronzo’ (turd) – in Italian, as in Anglo-Saxon, a term of endearment or opprobrium according to taste.

The books are written to a tight formula – 180 pages of 18 chapters of ten pages each. “It translates very easily into a script – and we all like this,” says Cesare Bocci, who plays Inspector ‘Mimi’ Augello, Montalbano’s sidekick and compulsive ‘donnaiuolo’, or skirt-chaser.

The social and physical landscape round Vigata – which has now been formally attached to the road sign outside Camilleri’s home town of Porto Empidocle – has a dreamlike quality, with a touch of ‘verismo’, the tradition of Sicilian realism which runs from Verga, through Cavalleria Rusticana to Leonardo Sciascia, Camilleri’s great near contemporary.

Woven into the story is the Mafia. Part of the brilliance of the whole Montalbano epic is that the Mafia rarely takes centre stage – but it is always there. “It’s as if Camilleri and Montalbano ran in parallel to the Cosa Nostra, always aware of each other,” says Ciccio Lalicata , Sicily correspondent of La Stampa.“The Mafia was always part of the air I breathed, from birth,” Sciascia told me not long before he died.

The two big clans round Vigata are the Cuffaro and Sinagra, loosely but accurately based on fact. One of the most electrifying scenes is when Balduccio, the old Sinagra capo, brilliantly played by Francesco Sineri, another ancient local actor, tries to explain the notion of ‘The Honoured Society'. On the terraces at Donnafugata (as in The Leopard), he quavers, “In the society of men a line has to be drawn, however, between men who must be men, but if they cross the line they become beasts of the field.’ He then explains why this sense of honour compelled him to shoot dead his son.

Like Sciascia and the great judges Falcone and Borsellino, blown up by the Mafia in 1992, Camilleri has been accused of “anti-Sicilianita” – anti-Sicilianism. He has never been afraid of controversy and has taken on George W Bush, Giulio Andreotti Italy’s Mephistophelian, eight-times prime minister and Silvio Berlusconi in the stories. A recent episode directly criticised the anti-immigrant policies of Matteo Salvini, deputy prime minister and leader of the right-wing League party, causing a huge row which the author said smacked of a new Fascism.

But perhaps his biggest challenge became his own creation, Salvo Montalbano. Like Holmes with Conan Doyle, he came to have an outsize life of his own. A magic-realism short story opens with the Inspector phoning the author in the middle of the night. “I am fed up with this, I quit, I resign,” the detective shouts at his creator. “All you have given me is a life of blood and corpses. No more!”

In fact, the death of Camilleri, surely one of the most simpatico of writers of our times, is a story of a death foretold for his great creation. Spoiler alert. Some time ago, he wrote the final word; ‘Il Cuoco dell’Alcyon’, Montalbano’s last bow. The book has been held in a safe by his publisher, to be released now, on Camilleri’s death.

“Sherlock Holmes was recovered” he told an interviewer in 2012, “but it will not be possible to recover Montalbano. In that last book, he’s really finished.”

Unless, of course, they can find a Reichenbach Falls somewhere in that dreamland between the verismo and fantasy of Camilleri-Montalbano’s Sicily.