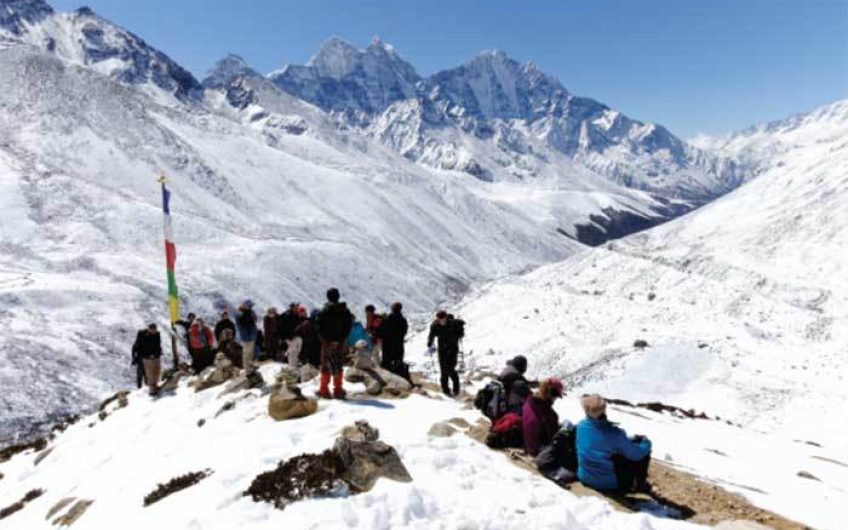 May 29th 1953. It was a sunny day, and two men planted an axe and a flag at the top of a snowy mountain and entered the history books. The men were Sherpa Tenzing and Edmund Hillary. The mountain was Mount Everest. The achievement of these two – the one a gentle Nepali, the other an adventurer from New Zealand who came to be revered as a national treasure in his lifetime – echoed worldwide (indeed, the announcement of the conquest was made on the morning of the Queen’s coronation). With the help of a team of 400 porters and guides, these two intrepid climbers had reached the top of the world, and what could be more romantic than that?

And the mountain! It may have been named by westerners after the head of the Great Trigonometrical Survey of India, the faintly pedestrian-sounding Sir George Everest, but in Nepalese it is known as Sagarmatha (goddess of the sky) and in Tibetan as Chomolungma (goddess mother of the universe) – 29,035 feet of Ordovician limestone, marble, quartz, sandstone sandwiched together into one glorious sixty-million-year-old icy-white millefeuille. To the Nepalese and the Tibetans, the mountain is sacred, a temple of geological history that, until Tenzing and Hillary conquered it, was best left to its own devices.

Ex-army officer Henry Chaplin has recently returned from a summit attempt where he was accompanying a five-man team of injured soldiers under the Walking with the Wounded umbrella. When Henry’s team reached base camp at the end of March, they knew they were setting themselves a stiff target. Unseasonally high temperatures meant that the prevailing conditions – even for a fully able-bodied team – were treacherous. Ice poked through the thinning snow, there were reports of constant avalanches and falls of deathly ice-rocks, and the winds – often at speeds of 115mph and more – were relentless. In spite of this, base camp was playing host to another 500 wannabe Everest summiteers.

High numbers at base camp bring other threats. You may have survived the altitude sickness, the hypothermia, the barrenness, the miserable weather. But how will you fare when you find yourself confronted with poor hygiene and disease? Or as Martin Hewitt, leader of the team and no stranger to personal challenge (he was shot while leading an attack against the Taliban in Afghanistan and has a paralysed arm as a result) puts it: ‘You don’t mix much at base camp, in case you get D&V’ (what those of us in civvy street refer to as diarrhoea and vomiting).

After a couple of weeks of acclimatisation, the next challenge is to press further up the mountain. This year, the shortened weather window led to a huge rush. For Chaplin and Hewitt, this meant that when they reached the Lhotse face they found themselves in queues of up to 300 people.

A licence to climb Everest costs $10,000. Guides, gear and supplies for the trip will add considerably to the expense. Sensible climbers will go as members of a large guided group and places on these cost $30,000 upwards. However, there is a risk with less experienced mountaineers. They may not be bad climbers per se, but they lack the experience to make sensible judgments, or indeed to be able to help others in need. We heard of a girl making the ascent who passed a man lying in the snow. He waved at her. She waved back and carried on her way. To her surprise, he was dead when she came back down.’

By mid-May, the Walking with the Wounded expedition made the decision to turn back. ‘Conditions were too dangerous and we couldn’t continue exposing our Sherpas to the risk. Not everyone followed our example, however. In fact, after we left, ten more people died.’

Asked if he would go again, Henry Chaplin is emphatic. He would do anything to support Walking with the Wounded. But as for Everest and D&V, he wouldn’t dream of it.