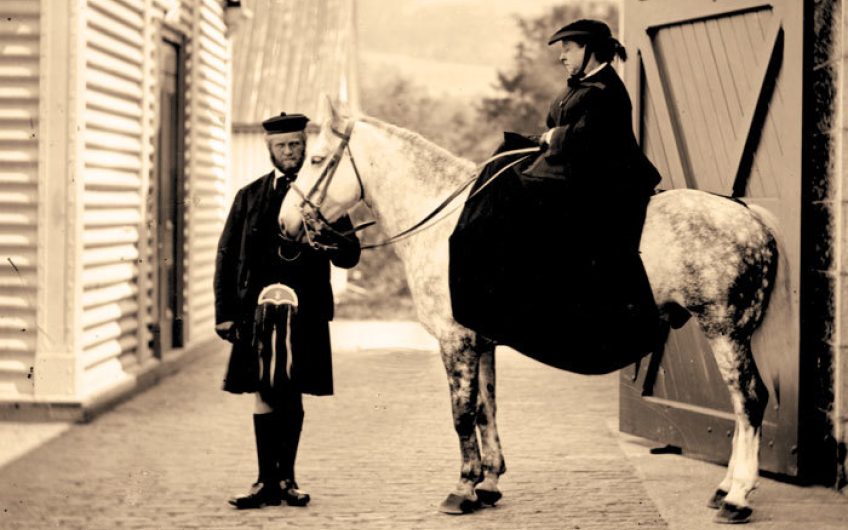 Dead and buried for more than a century, Queen Victoria continues to brood over the Royal Family. Several of her descendants have been revealed as promiscuous philanderers, but was Victoria guilty of an indiscretion of her own?

The young Queen was bereft after the death of her darling Prince Albert. He was only 42 when he died of typhoid in 1861. As well as being spiritually and intellectually well-matched, the couple had enjoyed a mutually fulfilling sex life, resulting in nine children. In her miserable widowhood at Balmoral, Victoria grew ever closer to John Brown, her late husband’s uncouth ghillie. She spent every available moment with him, much to the consternation of her family and advisers.

According to the historian Tristram Hunt, Brown ‘was rough, foul-mouthed and frequently drunk, but she seemed enchanted by him.’ Her alarmed daughters joked of Brown as ‘mama’s lover’; lewder souls called him ‘the Queen’s stallion’, while the republican press referred to the Queen as ‘Mrs John Brown’. Under the circumstances, the still fecund monarch and her devoted servant could easily have become intimate.

A well-known historian now claims that Queen Victoria gave birth to Brown’s child in secret, some three years after Prince Albert’s death. According to this new version of events, a girl was born on the Balmoral estate, but was later shipped off to the United States.

The story may seem far-fetched, but John Julius Norwich says he was told about it by the late Sir Steven Runciman, a much admired historian of Byzantium, a Fellow of Trinity College, Cambridge, and a close friend of the Queen Mother and other members of the Royal Family. Runciman told Lord Norwich that the details of the secret birth remain in the Royal Archive at Windsor, and are contained in the private diaries of Jane, Marchioness of Ely, Victoria’s Lady of the Bedchamber and closest confidante.

Jane, whose mother was a cousin of the first Duke of Wellington, arrived at court in 1851, a decade before Victoria was widowed. She travelled everywhere with the Queen for more than thirty years. Still in deepest mourning, Victoria withdrew from public life after Albert’s death, and spent much of her time at Balmoral. To the frustration of her courtiers, to whom he was insufferably rude, Brown was her constant companion.

According to Lord Norwich, ‘Sir Steven Runciman told me that she said to her family and staff: “I am going to spend the summer alone in a little cottage far away on the estate in order to think about dear Albert.” She returned after three of four months a different woman. She was absolutely restored, tinkling and smiling and funny, totally transformed.

‘A couple of weeks later she said to the Marchioness of Ely, “Jane my dear, we are going on a little drive in the pony cart. It is just going to be you and I, and I shall be driving the pony cart.” Off they drove to John Brown’s cottage, and the Queen said: “Now Jane dear, you stay here in the pony trap. I shan’t be very long.” The Queen went into the cottage, and five or ten minutes later a servant arrived on horseback. The Marchioness had never seen him before. He too went into the cottage.

‘She then heard the noise of a baby crying,’ Lord Norwich tells us, and the Queen came out with Brown. She was beaming, and carrying two glasses of champagne. She gave one to Jane and said ‘We have something to tell you.’ She told her about the baby, and Jane replied: ‘How wonderful, ma’am.’

According to Lord Norwich, the baby was never seen by any of her family or staff at Balmoral. ‘The second act of this drama occurs at least eighty years later. Queen Victoria’s great-grandson Prince Henry of Hesse, whom I knew slightly, was a painter. Sometime after the war he was exhibiting in New York and an elderly lady came up to him and said, “I think we are related.” He replied: “Are we? May I ask your name?” She said: “I am Jean Brown.”

‘I heard this from Henry himself and he believed her,’ John Julius insists. ‘Presumably she had been shipped across to America at a very early age and had lain doggo for more than eighty years.’

Henry went to his grave convinced of the existence of his cousin Jean Brown, but she was never heard from again, and it is thought that she died in New York in the 1950s. No one knows whether Queen Victoria made any financial provision for her illegitimate daughter.

What is known is that the Queen was in love with Brown. When he died in March 1883 Victoria was distraught. She wrote to his sister-in law, ‘Weep with me for we all have lost the best, the truest heart that ever beat. My grief is unbounded, dreadful, and I know not how to bear it, or how to believe it possible.’ ‘Never forget your poor sorrowing grandmama’s best and truest friend,’ she told her grandson, the future George V.

She had Brown’s image in bronze erected at Balmoral (it was removed after her death by Edward VII), and had to be dissuaded by the Dean of Windsor from writing his life story on the grounds it would fuel rumours that she and Brown had been lovers. She told her physician Sir James Reid, the grandfather of The Oldie’s editor, to secretly deposit in her coffin mementos of her beloved ghillie: a lock of Brown’s hair and a picture of him were placed in her left hand, concealed from view by a carefully positioned bunch of flowers. She was even wearing John Brown’s mother’s wedding ring, given to her by Brown in 1883.

Sir Steven Runciman also claimed to have discovered in the Royal Archive a marriage certificate for Queen Victoria and John Brown: he showed it to the Queen Mother, who immediately burned it.

Two years after the Queen’s death, Sir James Reid was summoned to Buckingham Palace. Edward VII was being blackmailed over some 300 letters written by his mother which contained intimate details of her life with John Brown. They were recovered by Reid and given to the King. Reid noted in his diary that many of the letters were ‘most compromising’, and committed to a memorandum book the secrets they contained. On his instructions the book was burned after his death in 1923.

Could these letters have contained details of Jean Brown’s birth and subsequent dispatch to the USA? As Sir James’s biographer and grand-daughter-in-law, Michaela Reid, concludes, ‘No one will ever know.’