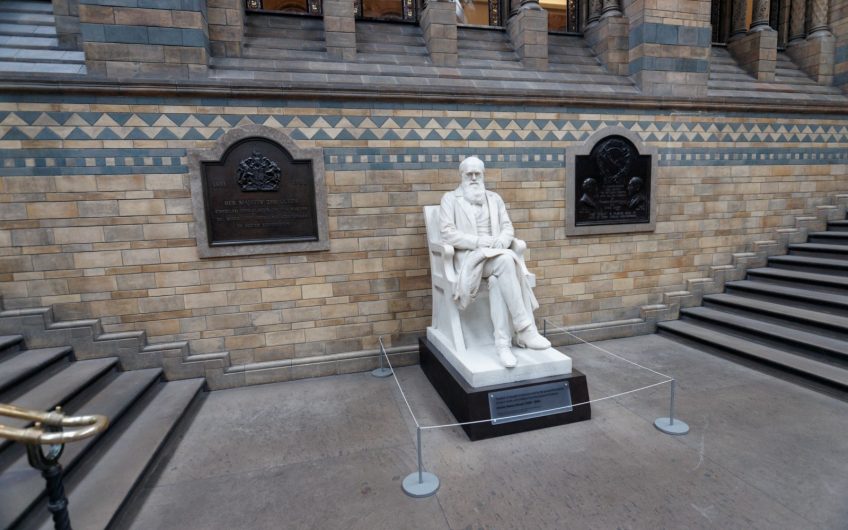 It will be interesting to see how long it is before someone reads Charles Darwin’s Descent of Man and decides that his statue should be removed from the Natural History Museum. He was not merely, like so many Victorians, profoundly racist. He it was, especially in that disgusting book, who tried to give racism a “scientific” justification .

Writing as a scientist of international renown, Darwin used his reputation to state that the inferiority of “savages” to “civilised” people was an observable fact. He claimed that the size of people’s skulls and their intellectual faculties were correlative (something which every scientist in the world now knows to be nonsense). He rejoiced that the nineteenth century was one “in which civilised nations are everywhere supplanting barbarous nations”. The subjugation of Africa and parts of Asia was the only hope the inhabitants could have of gaining a modicum of “civilisation”. Northern Europeans were superior to all the other races in the world because of their greater energy. The immense Negro and Portuguese element in Brazil, for example, accounted for the fact that Brazil was economically more backward than, say, France.

Although, in the Origin of Species, Darwin was obliged, for his theory to work, to believe that “the American aborigines, Negroes and Europeans” all derived from a common ancestor, this by no means meant they had all evolved subsequently at the same pace.

The sixty year old Darwin looked back to his younger self, who had visited Tierra del Fuego on HMS Beagle. He repeated the claim he had made earlier that the inhabitants were cannibals, which is completely untrue, In his laughably ignorant and wrong-headed reflections on the “evolution” of human language, he says that, whereas the civilised languages have huge vocabularies and complicated grammars, the inhabitants of Tiera del Fuego spoke a language “which scarcely deserves to be called articulate”. What he meant was, he did not bother to learn the Yaghan language which actually has a vocabulary of over 30,000 words. The Descent of Man gives the impression that “savages” of this planet do not really have languages at all, in the civilised sense of the term.

It was the Descent of Man which inspired Darwin’s cousin, Francis Galton (pictured above), to evolve his idea of “eugenics”. In his conclusion to The Descent of Man, Darwin said that if the prudent avoid marriage, while the reckless marry, it was inevitable that “inferior” members will supplant superior members of society. In the hands of Galton and his followers, this led to a fear of “race suicide”. Sidney Webb (pictured below), for example, founder of the New Statesman, the London School of Economics, and a pioneer of the Independent Labour Party, feared that Britain was “gradually falling to the Irish and the Jews”, which was why, in his newly-founded LSE he established a Professorship of Eugenics.

All these Darwinian views were, of course, adopted wholesale in other parts of Europe. Less than thirty years after Sidney Webb founded the Chair of Eugenics in London, Germany was enacting the Reich Censorship Law, the Blood Protection Law, the Marital Health Law and the Nuremberg Laws for racial segregation, all based on the bogus Victorian science which started life in the gentle setting of Darwin’s study at Down House – now property of the National Trust. Surely they should think seriously about dismantling this seedbed of bogus racist theory?

I was vilified in some quarters, three years ago, when I published Charles Darwin, Victorian Mythmaker, but I do not retract my view that although he was a brilliant naturalist, Darwin’s scientific theories are flawed, many of them are plain wrong, and his socio-political views, dressed up as pseudo-science, have done untold damage to the world.