My ABBA tribute – at the police station 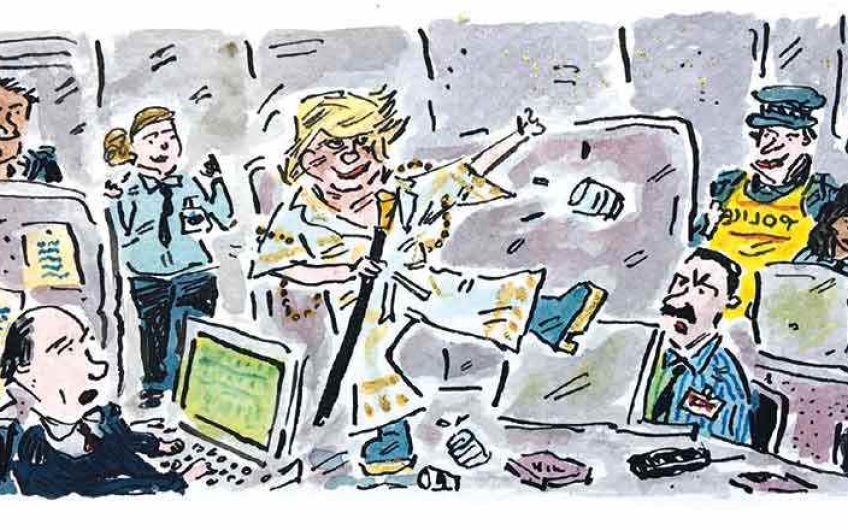 Like the Swedish supergroup, Jem Clarke's got a new look for his relaunch

Mother has been buoyed by my first substantial job of the year – and became particularly giddy when she heard it would involve two days a week working in an office in a far-off city.

‘With multiple trains, he’ll be gone before we’re even up,’ she gabbled excitedly as she scraped butter substitute onto a celebratory crumpet. Crumpets are normally reserved for surprise death notices of perceived enemies. Father and I often reflect that if Mother could find a tall enough stool to reach the computer desk, she would make an excellent troll, in every sense of the word.

My own attitude to my return to full-time filing duties is a little mixed. At age fifty-and-change, I will be the oldest by decades among the new starters, but I’m excited by the prospect of listening to Voyage, the new ABBA album, on repeat during the lengthy commute.

I have some loyalty to the Super-Swedes. I incurred the wrath of my father when I ran up a huge telephone bill using the Dial-a-Disc service after becoming addicted to Fernando, and had my first snog to Super Trouper.

‘A little bit ploddy and over-eager to engender any romantic feelings’ was my date’s review of the song and my kiss.

Annoyingly, I bumped into the same person a couple of years ago, and she can’t remember even kissing me, let alone dancing to ABBA. I insisted she must because it was such a significant moment in my life, but she rationalised, ‘I’ve probably kissed a lot more lips since then than you have.’ Unnecessary.

I hatched a plan: just like ABBA, I could use my new job as a ‘relaunch’ of Jem Clarke as an object of attraction. Unfortunately, unlike ABBA, I could not pay for a hologram of how I used to look three decades ago. So I settled for my first-ever hairpiece – £30 (thanks, Amazon) – and a pair of white skinny jeans.

‘Am I rolling the years back, Dad?’ I asked, emerging with longer, blacker hair and drainpipe legs.

‘Yes, but only inasmuch as you’ve just reminded me of Max Wall.’

I had to trial this look for ‘walkability’ and ‘credibility’. Luckily, that very afternoon I had an appointment with a senior police officer. He had invited me to meet with him at Cleethorpes Police Station to discuss my lengthy email, rounding up my many concerns about a decline in local policing baseline standards.

I felt safer going in my new ‘disguise’, in case I was later targeted because of my complaints. For good measure, I teamed my tight white trousers and flowing faux locks with a walking cane.

The police station is only a street away from my house and I was soon rapping with my cane on the locked station door.

To no avail. Peering in through the gloomy glass, I could see the station lobby was unmanned.

I used all my ‘SAS-are-you-tough-enough’ smarts to sidle along a small ledge until I dropped down into a yard at the back of the station. I knocked on the back window with the over-eager impatience of a trainee bailiff.

In hindsight, I realise the police are understandably jumpy in these times. Suddenly, the fire exit was kicked open and an officer wearing body armour appeared, yelling, ‘Identify yourself!’

I threw my cane down and, for no good reason, raised my wig in greeting as if it were a hat, explaining as best as I could, ‘I’ve got an appointment at four o’clock.’ Desperately trying to recall the name of the officer, I squealed suddenly as I remembered: ‘Marsh – Willy Marsh.’

‘Wait here,’ barked the officer. I was led, shamefaced and de-wigged, through what looked like a 24-hours-in-police-custody theme park. Real police-folk sat at desks, looking intently at cyberscreens, while doubtlessly sharing off-colour jokes. I was taken into a room and the officer announced, ‘All right, Sergeant. I’d like to introduce you to … Willy Marsh.’

I suddenly realised where I’d gone wrong. Marsh was in fact the name of the district that a Sergeant Will policed. And now they thought I was called Willy Marsh. It was so confusing that I just went with it and we had a genuinely useful conversation. He even unlocked the front of the police station to see me out.

I walked proudly out of the police station, having fulfilled my civic duty – and no one had sniggered at my trousers. I put my earphones on and listened to the emboldening lead ABBA track, I Still Have Faith in You, and waved confidently at a couple I knew as they passed, my chest as swollen as my taut-trousered testicles.

Then the police-station door re-opened. A voice yelled, ‘Oy, Willy! You forgot your wig.’ A hairpiece was frisbeed at me, landing on my shoulder.

I wish ABBA better luck with their comeback.