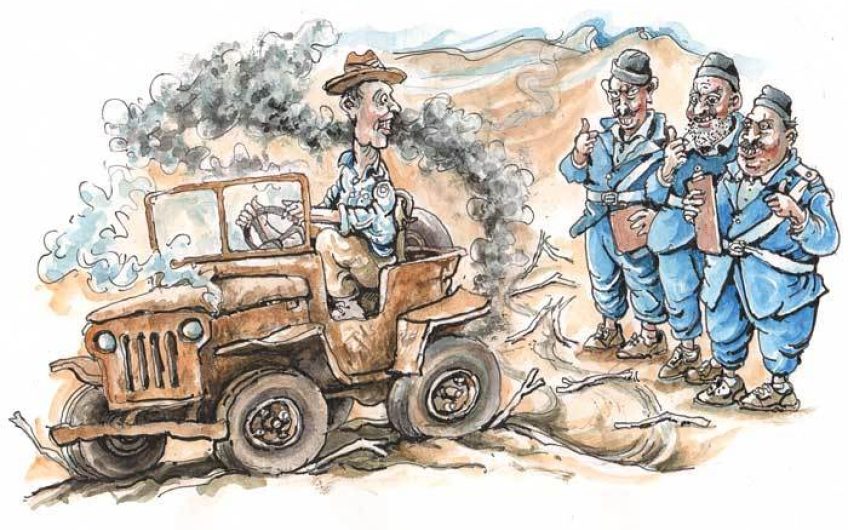 In Kabul in 1953 the king, Zahir Shah, lived in his palace and there were no hippies, Russians or members of the Taliban. Pathan warriors, hand in hand, strolled through the streets with roses between their teeth or stuck in the barrels of their antiquated guns. In the shadowy bazaars, shrouded women quarrelled, their shrill voices emerging like smoke from the embroidered grilles in front of their faces.

Outside Kabul, the imposing British embassy, known as Curzon’s Dream, was guarded by Gurkha sentries. Every morning the ambassador’s favourite dog, his noble Afghan hound, or tazi, was led from his kennel by a gardener for his regular run. At night the great building, the size of a palace, was bright with coloured lights to mark the young Queen’s coronation and the climbing of Everest by the beekeeper Edmund -Hillary and his companion Tenzing Norgay. Since the capital was in almost total darkness, the illuminations made an impression on passing nomads.

I was taking up employment as a teacher of English at the Royal Military School, where, perhaps understandably, the Ministry of Defence preferred to recruit an Irishman rather than anyone from England.

Some time after my arrival I was lucky enough to meet the American -military attaché, who agreed to sell me his -battered ex-army Jeep. Suddenly a whole new world opened up to me. Now I could drive out of Kabul with friends and enjoy the amenities of Paghman and Babur’s tomb. I might go further in exploring such a wonderful country, to the great Buddhist statues at Bamiyan, which, like the British embassy, would be blown up half a century later. I had plans to drive northwards to the remote -province of Nuristan. I was intensely proud of my new possession in a world that was almost without cars.

But there was a hitch.

‘You must have a driving test,’ the debonair young Afghan official in dark glasses told me over a glass of the obligatory tea. Who would have thought of such a ridiculous idea in a country where donkeys, horses and camels were kings of the dusty roads?

I showed him my Irish driving licence. I did not tell him that in Ireland at that time no driving test existed, and there were no qualifications necessary to obtain the document except to fill in a form which, in addition to my name, address and age, required a statement that there was no insanity in the family.

After examining the document for some seconds he smiled and shook his head.

He arranged for me to appear with my Jeep on a stretch of empty land some distance from the city.

A few days later I followed the -directions I had been given. Paper kites fluttered over the rooftops of the tawny, mud-built houses. In the main street one of the new traffic policemen, resplendent in white peaked hat and blue uniform, waved his arms and blew his whistle at sad, thin horses and the occasional overcrowded bus. Recently the American vice-president, Richard Nixon, had paid a visit to Kabul. To give him the right impression of the city’s modernity, all standing passengers on buses were forced to lie prone in the aisles so that only those who were sitting comfortably were visible to his passing motorcade.

The Jeep was hoodless, stripped bare, and equipped with canvas seats. It was spouting clouds of smoke from the ­exhaust and I had difficulty with the gears. In front of me a line of Kuchi camels, following their ­traditional route to the distant snow-­covered mountains, was blocking my way. The horn did not work. With difficulty I managed to squeeze past and reach my inquisitors.

A group of men in their uniform of best blue suits, Karakul hats perched on their heads, was waiting for me as I drove up. Each of them carried a briefcase under his arm. We salaamed, murmuring ritual words and clasping our chests.

What was I expected to do?

‘Please, sir.’ An official pointed to a narrow, twisting path marked out with a series of small sticks that had been thrust into the sandy soil.

‘Four sticks down no licence.’

From each briefcase came a pen and a piece of paper. ‘Back and forward.’ It was another blazing-hot day and everything shimmered. I started the engine and exhaust smoke made it -difficult to see anything. I lurched forward and knocked down a stick. And then another.

By the time I had reversed, every one of the curved line of sticks had been rolled flat by the Jeep’s bald tyres, and they resembled fallen soldiers lying on the ground.

‘I don’t know what happened,’ I said, as the engine continued to billow smoke.

I watched the little group confer and then the main official returned to me.

‘You have been awarded the first Afghan driving licence.’

We all smiled and pressed our hearts. Later, still smiling, they watched me start up and roar back towards the city.

In the months that followed I drove over much of the country. For many years I kept the scrap of official paper topped by the royal crest which I had been given, but then it disappeared.

Guilty Men: the Three Tory Big Beasts who brought Maggie down 30 years ago. By Norman Tebbit