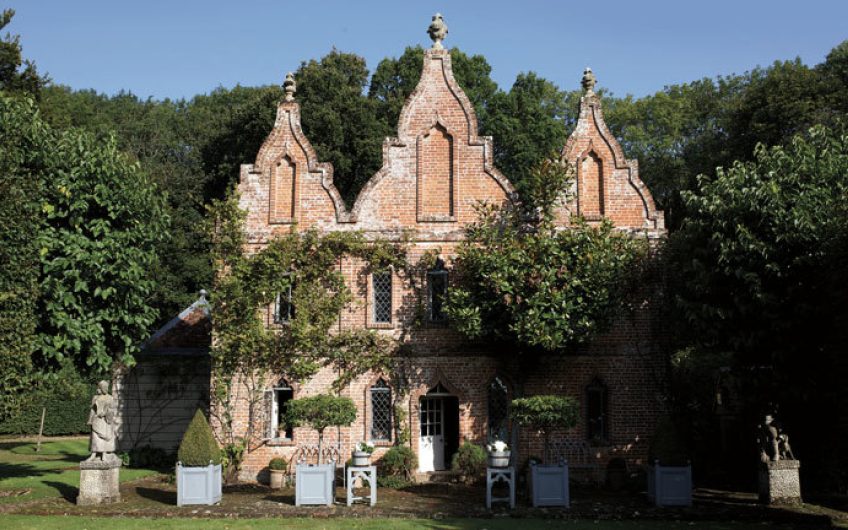 On 20th November, Nicky Haslam, who is leaving his beloved home of 40 years, is selling his dearest possessions – with no regrets

Half a lifetime ago, I drove down a rough track through a wood of ancient oaks.

Shafts of morning sunlight mingled with the smoke of a charcoal-burner’s fires. I came to a lake, turned, and on the rippled surface was reflected a rose-pink shimmer. I looked up. Above the far bank, beyond a deep tangle of bracken, framed in unkempt hedges and against a backdrop of dark elms, was a fantastic, still façade – mellow brick pierced by pointed windows, tall gables crested with stone urns. Only a quivering vine and some falling petals stirred the stillness, verifying reality.

It was, of course, what I had come to find; to see; to hope for. I had read of this hidden jewel; of its romantic history. For centuries, its Tudor core had stood here in these once-royal forests, and later the ‘pretended Jacobean façade’, as Pevsner neatly puts it, was added. But I hadn’t expected love at first sight, nor that for the next half-century I would live there.

The house was flyblown, mouse-riddled and empty. The rooms, most merely 12ft square, retained the wall colour and trompe-l’oeil panelling devised by John Fowler, legend of decorators, who gave the house to the National Trust (I rent it from them). Some curtains framed the lattice-paned windows. Apart from these, it was a blank canvas, asking to be painted.

Gothick with a k was clearly called for. Anything – furniture, frames, objects with a tripartite arch or quatrefoil – was just the ticket. I haunted country auction houses and junk shops, slathered grey paint onto finds of dark wood, and mixed them with a few inherited things and some shaggy white rugs. Bit by bit, better things were added: busts, pictures, porcelain and, of course, books. The roses were untangled, the box clipped, rides scythed through bracken, and more books needed more shelves.

I gave a housewarming ball one golden night the first June but, after that, stuck to more intimate affairs: lunches in a pavilion; dinners on the terrace under candled lanterns hung in the magnolia’s branches. Even in wintry grey, the sitting-

room door stayed open, the firelight glowing on the pink, distempered walls, suppers in a frescoed dining room created out of former – one trembles to write the word – servants’ quarters. And more books piled up, as did the deep snow of two Decembers … we were the coldest place in Britain during one of them. If it sounds like a dream, it was – but we all know about dreams.

Over the intervening years, many things have been lost or changed. The charcoal burner’s essential – the hazel coppices beneath the oaks have given way to tidied-up spaces for lusty hikers. The badgers have abandoned a sett-riddled bank across the canal. The nightingales flew when a swanky hotel was created in the park for which the house had been an eye-catcher. Herons no longer dance a mating ritual on Lousey Moor. On a more mundane level, upkeep, finding help, and night-driving fear,

plus the inevitable sapping of energy, cloud the dreamtime. After nearly five decades, reality kicks in. It’s time to up sticks. I have no space or need for any more sticks, let alone books, in London. The ‘look’ there is quite different. The moment has come for a reassessment.

And as I’ve always enjoyed an auction I’m looking forward to mine, at Bonhams in November. The stuff I’ve collected, the stuff of that dream, will take on a fascinating aspect in a different setting, with the added thrill of my seeing if the things I’ve loved find a home with those who saw them in mine, and will, with luck, see them again in theirs.

Inevitably, people ask if I’m going to miss what I’ve known all this time, ever since I moved here in 1978. But l don’t have a sentimental nature; life is too long for such indulgence. A few books with messages will stay with me; friends who are building a library will far better house the rest, and keep them together. I prefer an ashtray nicked after a water-lapped dinner on the Bosphorus; the fan letter written by Nancy Lancaster. Such trifling things are an immediate memory-jogger, a madeleine to the eye.

It’s momentary sights, or sounds, that will be irreplaceable. That first sheen of green which, overnight, glosses the hornbeam’s strict contours; dark silhouettes of local boys pulling pike out of the lake, where each spring an immaculate cob and pen have, in their swan’s way, returned to raise cygnets on the willow island.

I’ll miss the strangled yowl, in the small hours, of a hunted weasel, a barn owl, suddenly spotlit in headlights, gliding across the lane, the rare nights when the moon bleaches the garden, and the breath-held hush at ‘Look, there’s a dragonfly.’

Such ephemeral flashes will remain etched far deeper than the contours of a room, the panic of the boiler breaking down, or the mysterious lack of lemons for the martinis.