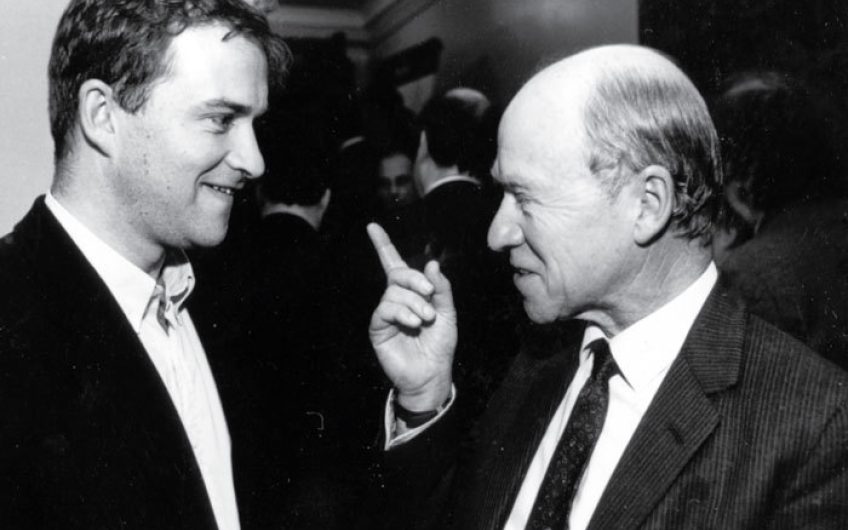 Harry and Edward Enfield at The Oldie of the Year Awards, 1993
View Full Size
1
of 1

The Oldie is very sad to announce the death of one of its longest serving – and most loved columnists – Edward Enfield (1929-2019). His son Harry Enfield writes about his late father.

My father was born into the educated middle class. His father was a senior civil servant and his mother on the fringes of the Bloomsbury set. He grew up surrounded by the Good, the Great and the Slightly Odd.

My grandmother had a couple of books published by the Woolfs, even though Virginia Woolf detested her. She wrote in her diaries, upon hearing that the Stracheys were spending the afternoon with my grandparents: ‘I would rather be dead in a field than have tea with the Enfields.’

In this atmosphere, Dad was, I suspect, an ideal son – away a lot of the time. He was evacuated to Canada for the war, then went to Westminster and Oxford, where he read Classics. After Oxford he was about to take his Civil Service examinations when his mother died. He withdrew and took a job abroad, travelling the world and eventually meeting my mother in the Far East. They returned to England, my mother pregnant with my sister, in 1959.

Now with an embryonic family to support, he took a job with a pharmaceutical firm, where he remained for several years, my younger sister and I being born in the meantime. In 1967 he left his job, determined to become a lawyer, doing a correspondence course from home while we lived off his meagre savings. However, by September of that year he was forced to concede that the grinning little twits that interrupted him as he studied were a lot more expensive to rear than he had hoped, and reluctantly he gave up his studies and took a post in the local education department, where he remained until he retired last year.

Not only did my father give up his chosen career, but also most luxuries. We lived comparatively frugally, with every spare penny being spent on our education. It was his great hope that he would be able to give us the best possible start, so that we could have the type of fulfilment in our working lives that, by our premature existence, we had denied him. In this he was fully supported by my mother, whose childhood had been coloured by being constantly on the move as her father was posted round the world by the army. With a safe stable homelife and the best education they could afford, their dream was that we would all become successful and financially secure professionals.

By 1976 it looked as if this dream would come to pass. My elder sister was soon to follow her father at Oxford, I had just turned fifteen, and had taken and passed my O’ levels a year earlier than is normal, and my younger sisters were at the top of their classes in school. Fifteen years on, my elder sister is a hippy living in a hut with a tribal husband and two babies in one of those West African countries you won’t have heard of. My younger sister is a slightly bewildered semi-employed radio journalist. My youngest sister has recently embarked on a career making deceitful promotional videos for lost causes – her current one revolves around the daft idea that Scotland is a nice place to visit and the Scots are in some way civilised.

As for myself, the son and heir, I used my expensive education to charm and cajole the successors of Lord Reith into giving me my own television programme, and now earn a tidy living from old age pensioners’ licence fees by making people as idiotic as myself laugh, generally through the comic devices of swearing, shouting and pretending to break wind.

Although now in their mid-twenties and thirties, none of my sisters had any financial security, and frequently nowhere to live either. Being comparatively well off myself, it would have been simple for me to help them out, but unfortunately, as is the rule with nouveau riche comedians, I am extremely mean and am happy to see my family reduced to grinding poverty as I watch my bank balance grow too large for the paper it is printed on.

In 1992, my father noticed that, along with my meanness, my vanity had also grown to new heights, causing me to shed two stone from the frame that until then I had been adorning with the flab of a thousand pointlessly expensive meals at the many vulgar restaurants which cater for London’s upstarts.

He gingerly suggested that he would be prepared to spend many months ghost-writing a ‘Harry Enfield’s Diet Book’ which he was sure my ‘excellent reputation’ (I insist on flattery at all times nowadays) ‘would make highly marketable’, the proceeds going to my sisters to pay for their housing needs. All I had to do was agree to turn up for a day to have a few pictures of my beautiful self taken, and give his work to a publisher. Naturally my first thoughts were that I wasn’t going to make a penny out of this arrangement, so I refused.

His next idea came from a discussion we had about Auberon Waugh’s autobiography. He made the comment that many people who write their autobiographies spend a generous amount of time saying how awful their fathers were, and how they ruined their offspring’s lives. He suggested that he would very much like to write about how awful his offspring were and how we ruined his life. He wished to give the world an insight into the horrors of trying to bring up middle-class children in a civilised fashion, and seeing all one’s efforts come to worse than nothing.

All four of us are a source of constant worry and embarrassment to our parents – ‘What interesting children you have’ is the veiled insult hurled at them daily by their friends.

If there’s one thing my father seeks to avoid more than his children, it is rows and confrontation. He has very rarely raised his voice to us. The last time I remember him doing so was fifteen years ago when he came into my room to inform me, more in exasperation than anger, that my mother had been worried by the police coming round that day and recovering some property I happened to have stolen from a local shop. I met his enquiry by calling him and my mother every four-letter word I knew, over and over again, until he stormed out of my room. A few minutes later he came back in and apologised for raising his voice to me. Quite right too.

At the Oldie, he seemed to think he was able to exercise his pent-up feelings of resentment through his pen. My natural reaction was to scoff at this idea. It seemed to me that as none of his family had the slightest interest in anything he ever has to say, why should anyone else? Also, as age took its toll, he was rapidly losing his grip on reality, and I doubted that there would be a shred of truth in anything he writes.

Nevertheless, to humour the old chap, I sent some of his stuff to Richard Ingrams who, purely to oblige me, said he’d find a space for it in The Oldie. I arranged to intercept the greater part of his fee as my commission. So there was a little bit of extra drink money in it for me, and enough left over for him to buy me a passable Christmas present for a change.